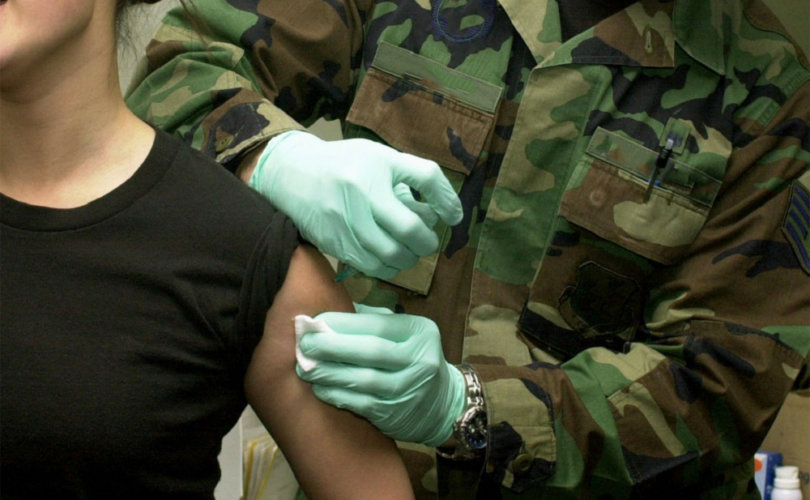 NEW YORK, November 12, 2020 (LifeSiteNews) — The New York State Bar Association (NYSBA) passed a resolution on Saturday advising the state to consider enacting a COVID-19 vaccination “mandate” for everyone in the state.

“The state should take steps to protect the public’s health and consider mandate as may be necessary to reduce risks of transmission and morbidity and mortality,” the resolution, which is in no way legislative, states.

“Should the level of immunity be deemed insufficient by expert medical and scientific consensus to check the spread of COVID-19 and reduce morbidity and mortality, a mandate and state action should be considered, as may be warranted,” the resolution adds.

The resolution lists “personal medical reasons” as a possible “exception” to a mandate being imposed on everyone. The resolution does not offer exemptions for religious, philosophical, or personal reasons.

“The New York Bar Association, of which I am a member, this week abandoned its long history of defending civil and constitutional rights to engage in the practice of medicine.”

— Article continues below Petition —
PETITION: Say 'No' to using the U.S. military as guinea pigs for COVID vaccine
Show Petition Text
17354 have signed the petition.
Let's get to 17500!
Thank you for signing this petition!
Add your signature:
Show Petition Text

The resolution specifically states: “To protect the public’s health, it would be useful to provide guidance, consistent with existing law or a state emergency health powers act as proposed in Resolution #1, to assist state officials and state and local public health authorities should it be necessary for the state to consider the possibility of enacting a vaccine mandate.”

The resolution recommends the state only consider making COVID-19 vaccinations mandatory if voluntary vaccinations fail to produce “needed levels of population immunity; that an assessment of the health threat to various communities be made so that perhaps the mandate can be targeted; and that a mandate only be considered after there is expert consensus regarding the vaccine’s safety and efficacy.”

Despite these qualifications, the recommendation leaves it to experts, not individuals, to decide on this serious medical intervention. Strikingly, the recommendation fails to mention the principle of informed consent, the bedrock of ethical medicine.

Mary Holland, General Counsel for Children’s Health Defense, commented: “At the end of the day, this prominent lawyers’ group endorsed medical coercion for an experimental medical intervention, which has been anathema in a free society since World War II.”

The MSEHPA supports the authorization of emergency powers such as rationing, the appropriation and destruction of property by public health authorities, and the control of transportation routes.

For example, the document proposes giving public health officials the authority to “control or limit ingress and egress to and from any stricken or threatened public area, the movement of persons within the area, and the occupancy of premises therein, if such action is reasonable and necessary to respond to the public health emergency.”

It also states, “To prevent the spread of contagious or possibly contagious disease the public health authority may isolate or quarantine, pursuant to Section 604, persons who are unable or unwilling for reasons of health, religion, or conscience to undergo vaccination pursuant to this Section.

The NYSBA resolution does not specifically quote any of these specific possible emergency powers. It does recommend a vaccine mandate in the case that “expert medical and scientific consensus” finds the level of population immunity insufficient to “check the spread of COVID-19 and reduce morbidity and mortality.” It also proposes the implementation of this mandate after certain conditions are met, including “adequate” clinical trials and “reasonable efforts to promote public acceptance.”

A group led by Patricia Finn, an attorney who specializes in vaccine issues, marched to Governor Cuomo’s mansion in protest of the resolution the morning it was passed. Finn told the New York Law Journal she has “represented thousands of families who have resisted vaccinations for medical and religious reasons.”

The resolution follows a May report released by the NYSBA’s Health Law Section’s Task Force, which drew heated criticism for advocating a nation-wide vaccine mandate regardless of “religious, philosophical, or personal” objections.

This latest resolution may be an attempt to appease the public in the face of increasing vaccine skepticism by softening the parameters of the mandate. In contrast to the previous May proposal, this recommends a statewide – not nationwide – vaccine, and its stated recommendation of preconditions for the mandate are new as well.

It should be noted that the NYSBA “is considered to be influential both with lawmakers in Albany and Gov. Andrew Cuomo’s office,” according to the New York Law Journal.