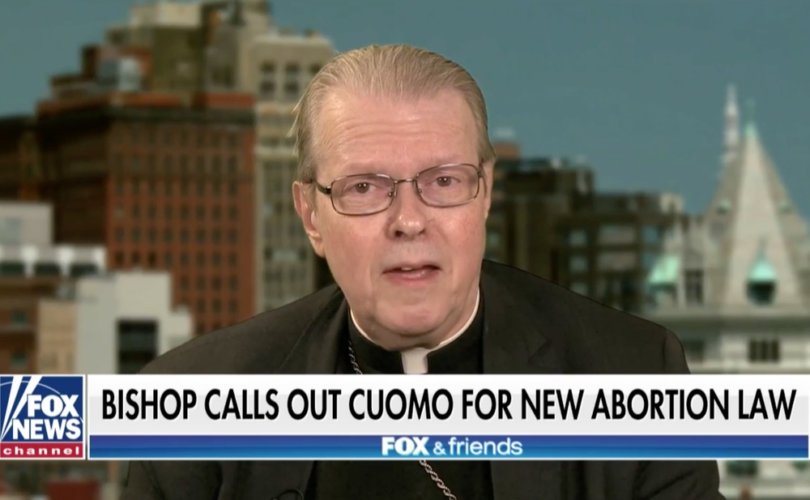 NEW YORK, January 28, 2019 (LifeSiteNews) – A New York bishop indicated that while excommunication is a last resort, Governor Cuomo’s recent enshrining of virtually-unlimited abortion in the state as a “fundamental right” and then publicly celebrating the new law may be a tipping point that may leave the Church no other option.

“Excommunication is a last resort, and as the Governor continues to distance himself from our [Catholic] communion, it may, unfortunately, result in that,” said Albany’s Bishop Edward Scharfenberger in a Jan. 26 televised interview on Fox & Friends.

“My hope is that since his faith is important to him, he will reconsider the importance of maintaining that communion and not continue to distance himself,” said Scharfenberger.

“One can put themselves in the position whereby morally they cannot receive Communion at the altar rail,” he added. “And I think the Governor is in that situation right now.”

Bishop Scharfenberger joins other bishops who have suggested that excommunication of Cuomo may be the appropriate response for his championing of and signing of the so-called Reproductive Health Act (RHA) last week on the anniversary of Roe v. Wade. The radical abortion bill codified legal abortion up to birth in New York state law, an act of preservation by pro-aborts should Roe v. Wade be overturned by the Supreme Court.

Knoxville, Tennessee, Bishop Richard Stika and Tyler, Texas, Bishop Joseph Strickland both indicated that if Cuomo lived in their jurisdiction they would take action.

“Someone asked me today if I would issue an excommunication of a Catholic Governor under my jurisdiction if the Governor did the same as in New York,” Stika tweeted last week. “I think I might do it for any Catholic legislator under my jurisdiction who voted for the bill as well as the Governor.” Bishop Strickland followed up on this tweet, saying that he was “with Bishop Stika” regarding issuing an excommunication, even though he was “not in a position to take action.” Strickland said the new law amounts to “infanticide.”

Archbishop of New York Cardinal Timothy Dolan, however, said on Friday via a spokesperson that excommunication is “not an appropriate response,” adding that “excommunication should not be used as a weapon.”

During the Fox & Friends interview, Bishop Scharfenberger said the new law dehumanizes a group of persons and is contrary to science.

“It’s a dehumanization of a whole class of human beings in our society––the child in the womb––who clearly is a human subject from the moment of conception,” he said, adding, “Science proves that.”

“So even though it has been advertised as a bill that brings more equality to women, it excludes a certain class of women, the unborn,” said Scharfenberger, noting, “Half of all abortions are females.”

Regarding Governor Cuomo’s claim that his differences with Church teaching “pains” him because his Roman Catholic faith is important to him, Scharfenberger said, “Many Catholics have differences with the Church on a number of issues, but this is a very radical separation from the Catholic communion in the way that he presents this.”

“Not only [is this] something which is a matter of law, but also is something which actually distances [Governor Cuomo] from one of the basic moral teachings of our Church,” said Scharfenberger,  “and that is the sanctity of all human life.”

The bishop said that it is understandable that Governor Cuomo wants to continue to ally himself with Pope Francis and the Church, but his stance on abortion is “Light years away” from the Pope and the Church.

Bishop Scharfenberger said he can’t understand Cuomo’s mindset which permits the governor to support abortion up until the last minute before birth.

“The kind of procedures that now are possible in New York State, we wouldn’t even do to a dog or a cat,” said the Bishop. “It’s torture.”

With files from Lisa Bourne.