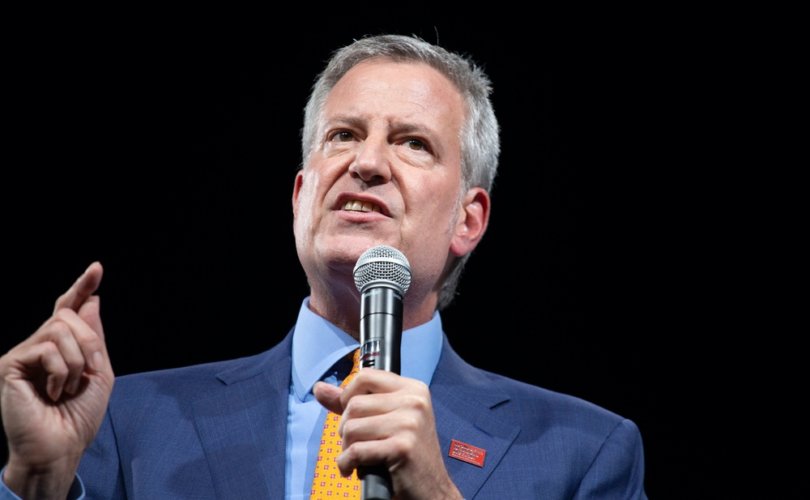 “At the same time, Mayor de Blasio marched in large in-person political gatherings concerning the recent tragic death of George Floyd and made statements suggesting — in a manner forbidden by the First Amendment — that religious exercise was less valued and protected by New York City than political exercise,” the letter continued.

In April, de Blasio infamously condemned a Jewish funeral gathering in Brooklyn as “absolutely unacceptable,” declaring that his “message to the Jewish community, and all communities, is this simple: the time for warnings has passed.” He and state Gov. Andrew Cuomo, also a Democrat, currently face lawsuits on behalf of three of those Jewish congregants as well as two Catholic priests for city and state restrictions on public religious assembly.

At the same time, de Blasio has justified permitting the massive Black Lives Matter (BLM) protests of the past few weeks on the grounds that “400 years of American racism, I'm sorry, that is not the same question as the understandably aggrieved store owner or the devout religious person who wants to go back to services.”

The Big Apple relaxed some of its restrictions on June 21 when it moved into Phase 2 of its reopening plan, allowing churches to open at 25 percent building capacity rather than the strict 10-person limit. The DOJ letter credited de Blasio for this change but warned that it would continue monitoring the city for potential abuses.

“The Justice Department is glad Mayor de Blasio will now permit greater religious exercise,” the letter said, “and will continue to monitor New York City’s reopening to ensure that New York City extends the same respect to the freedom of religion, both in terms of indoor and outdoor gatherings, as it does to the freedoms of speech and assembly.”

As of June 24, the United States is estimated to have seen more than 2.4 million COVID-19 cases, with more than 123,000 deaths and a million recoveries. More than 40 percent of those deaths have come from nursing homes. Thanks in large part to Cuomo’s decision to force nursing homes to take in COVID-19 patients, New York has been the hardest-hit state, with more than 413,000 cases, 31,000 deaths, and 87,335 recoveries.