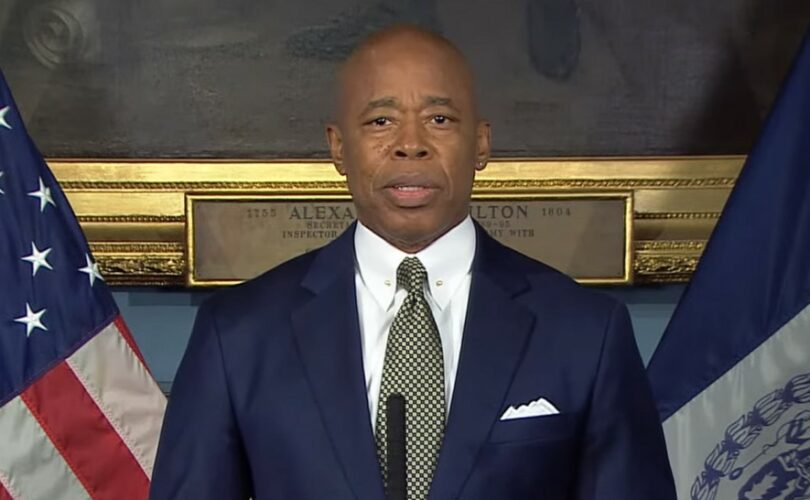 NEW YORK CITY (LifeSiteNews) — A clinic in the Bronx district of New York City has begun administering abortion pills without charge and available “to anyone,” regardless if they are from in or out of the city.

City Mayor Eric Adams announced Tuesday that the drugs used to kill unborn children in the womb will be made available at four public clinics across the city by the end of the year in response to the landmark overturning of Roe v. Wade, the 1973 Supreme Court decision which falsely held that abortion was a constitutional right.

“Historically, women’s health has not been prioritized,” the Democrat mayor said and claimed that the overturning of Roe had “endangered women’s health across the nation.” “It was a decision about controlling women’s bodies, choices, and their freedom,” Adams said.

In direct response to Roe being overturned, and noting that this week marks the fiftieth anniversary of Roe’s passing, Adams announced that from January 18 “we will begin rolling out medication abortion at our city’s sexual health clinics.”

While the city already provides medical abortions at its eleven public hospitals, Adams noted, nevertheless “we are expanding the program to reach more New Yorkers,” he said.

“No other city in the nation, or in the world, has a public health department that has provided medication abortion,”Adams boasted. “We are the first.”

“For too long, health and health care has been centered around men… If men had periods, pap smears, and menopause, they would get a paid vacation. And if men could get pregnant, we wouldn’t see Congress trying to pass laws restricting abortion,” the mayor claimed.

The city’s health department is financing the expansion of abortion pills from a $1.2 million dollar “sexual health services” fund. Ashwin Vasan, the city’s Department of Health and Mental Hygiene commissioner, said that the abortion pills will not only be free at the point of use, but will be “open to anyone,” a statement which introduces the question of a lower age limit on the procurement of the dangerous drugs.

On January 3, the Food and Drug Administration (FDA) relaxed its guidelines on access to the abortion pills mifepristone and misoprostol, allowing the drugs to be purchased over-the-counter in retail pharmacies, provided those pharmacies “complete a Pharmacy Agreement Form.”

Although the drug still requires a prescription, medical professionals need only to become certified through the “modified” REMS program to prescribe, a qualification that has been simplified. The Pharmacy Agreement Form does not specify any medical supervision, meaning that a woman can receive a prescription for the abortion pill from a REMS-certified medic and pick up the pills at a local pharmacy without any further supervision.

According to government data collected by the pro-life Charlotte Lozier Institute, between 2002 and 2015 hospital visits following use of the abortion pill increased over 500 percent, compared with a 315 percent rise in visits following surgical abortion.

Last November, a coalition of pro-life doctors and medical groups filed a lawsuit challenging the FDA’s approval of the two-drug chemical abortion regimen, citing the dangerous risks present for both mothers and their unborn babies.

In the year 2000 the FDA categorized pregnancy as an “illness” for which abortion pills could then be considered a remedy, leading to the initial approval of their use.

“Pregnancy is not an illness, and chemical abortion drugs don’t provide a therapeutic benefit,” the doctors’ lawyers argued.“They end a baby’s life, and they pose serious and life-threatening complications to the mother.”

“The FDA never had the authority to approve these dangerous drugs for sale. We urge the court to listen to the doctors we represent who are seeking to protect girls and women from the documented dangers of chemical abortion drugs,” they added.

Owing to the dangers associated with the abortion-inducing chemicals, 22 attorneys general signed a joint letter to the FDA on January 13, demanding that the agency overturn its new ruling.

“The Food and Drug Administration’s decision to abandon commonsense restrictions on remotely prescribing and administering abortion-inducing drugs is both illegal and dangerous,” the letter states. “In direct contravention of longstanding FDA practice and congressional mandate, the FDA’s rollback of important safety restrictions ignores both women’s health and straightforward federal statutes. We urge you to reverse your decision.”

The FDA has said it will issue a response directly to the attorneys general.

Following the FDA’s relaxation of its rules on abortion pills, pharmacy chains CVS and Walgreens announced they would begin stocking and dispensing the toxic drugs.