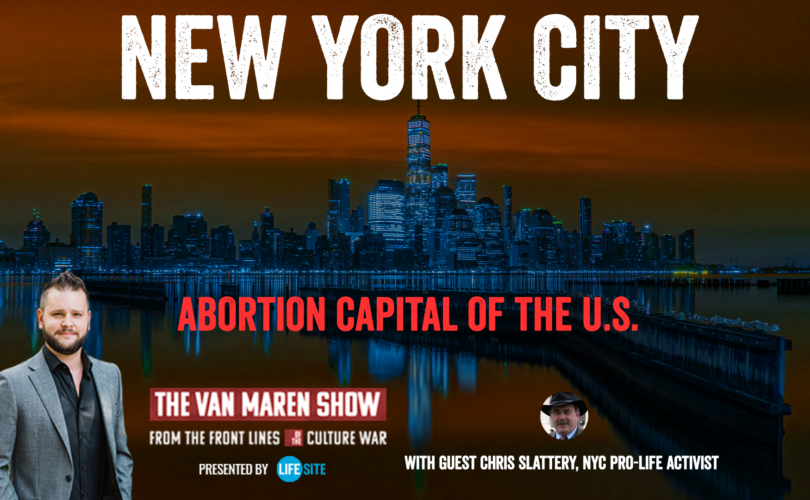 March 18, 2021 (LifeSiteNews) — In this week’s episode of The Van Maren Show, veteran pro-lifer Chris Slattery speaks to Jonathon van Maren about being an activist for the unborn in New York City, the abortion capital of America. Slattery has been involved in the pro-life movement for decades. He founded and runs many crisis pregnancy centers across the city.

Slattery began his full-time work of saving babies and helping their mothers in the 1980s, when he rescued his first child. His life changed “once I discovered that you can actually save a baby, by turning a mother around from her abortion plan.”

In 1984, Slattery left his career in advertising and opened up the very first pregnancy center in New York City. He was influenced and encouraged to do so by leading pro-lifers such as John Cardinal O’Connor, Fr. Richard John Neuhaus, Dr. Bernard Nathanson, and others. Today, he runs many centers across the New York area.

Over the years, Slattery and his institutions have sustained many legal attacks from the state and local governments. He says they “have been buffered and battered and harassed with lawsuits and efforts to cripple and shut us down over the last thirty five years.” During the months of COVID lockdowns, as New York City turned into a ghost town, their centers continued to remain open, “and managed to rescue many, many children.”

Slattery highlights how the abortion numbers in both city and state are booming, compared to other places in the United States. Moreover, he states that “for the last 50 years, there have been more black abortions than live births of black women.” He calls out Black Lives Matter and other “social justice groups” for not decrying these atrocities occurring in their communities.