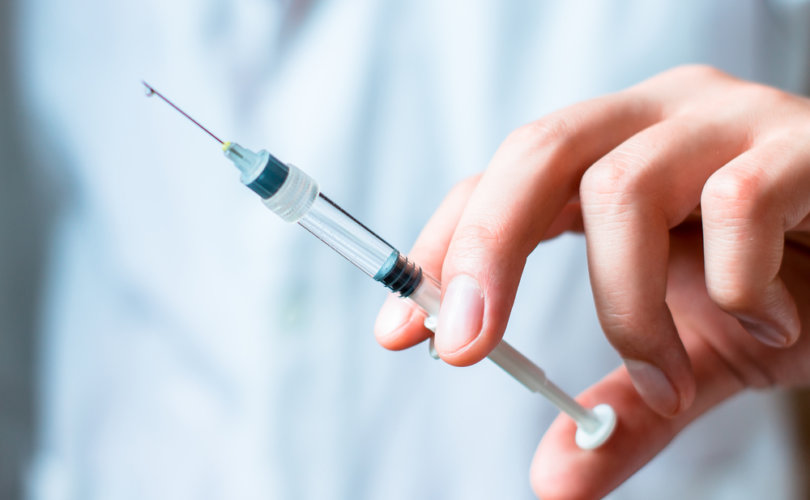 NEW YORK CITY, April 10, 2019 (LifeSiteNews) – New York City’s Department of Health ordered mandatory vaccinations on April 9 for all persons residing, working, or living in a largely Jewish district of Brooklyn, ostensibly because of hundreds of reported cases of measles.

The order, signed by Commissioner of Health Oxiris Barbot, declared that all persons, including children, residing in stated zip code areas “shall be vaccinated against measles.”

“As of April 8, 2019, there have been 285 confirmed cases of measles in Brooklyn and Queens since October. Most of these cases have involved members of the Orthodox Jewish community,” stated a memo from the Health Department.

Mayor Bill De Blasio (D) tweeted, “We are declaring a public health emergency in Williamsburg due to the 300 cases of measles reported in our city — primarily concentrated in Brooklyn. There's no room for misinformation when it comes to protecting our children. Vaccines are safe and effective. They work.”

At the Williamsburg branch of the Brooklyn Public Library, De Blasio declared a public health emergency on Tuesday and ordered compulsory vaccination. He also warned that anyone failing to comply with the order may face a $1,000 fine.

A number of parents oppose vaccines over fears of negative side effects to their children, which in cases has included death. Some also are opposed to vaccines on moral grounds because they have been derived from aborted babies’ cells. Many parents hold that they should be given first say in whether or not their children should receive vaccinations on ethical, religious or medical grounds.

While the Supreme Court ruled in 1905 in Jacobson v. Commonwealth of Massachusetts that governments may force vaccination, it found a distinction between punishing citizens for refusing inoculation and actually vaccinating them by force. Both tactics have been used as far back as 1900 during a plague outbreak in California and during a 1991 measles outbreak in Pennsylvania. In the Jacobson case, the man who refused vaccination was ordered to pay a fine but was not compelled to be vaccinated.

The order issued by NYC health commissioner Dr. Barbot, however, declared that any person over the age of six who has not been vaccinated and cannot prove a measles immunity or show a medical exemption “shall be vaccinated.” Outside the text of the order is an additional warning that persons failing to comply may face misdemeanor charges leading to fines or imprisonment. According to the New York Times, Barbot said on Tuesday that non-compliance will be dealt with on a “case-by-case basis, and we’ll have to confer with our legal counsel.”

The order declared: “Since September 2018, more than 250 cases of measles have been documented among people living in Williamsburg and that number continues to grow as new cases are still occurring.” In an earlier response, NYC health officials ordered in December that non-vaccinated students were to be prohibited from attending classes at certain Orthodox Jewish schools and daycare centers. According to Mayor De Blasio’s office, no deaths have been reported.

In March, officials in nearby Rockland County responded to an upsurge in measles cases by forbidding unvaccinated minors from “enter[ing] any place of public assembly in Rockland County,” unless they can be shown to be immune, have a medical exemption, or are younger than six months. The order covered any place of assembly where more than 10 persons assemble, including churches and synagogues.

New York Supreme Court Justice Rolf Thorsen halted the vaccination order, however, arguing that the county's order didn't meet the requirements for a disaster to required by law to make such an order.

Members of the Williamsburg and Borough Park communities have objected to vaccinations on the basis of Jewish religious laws after pamphlets circulated in the communities advising against vaccination out of respect for core Jewish religious beliefs. In a report by the New York Times, Moishe Kahan told the newspaper: “Vaccines contain monkey, rat and pig DNA as well as cow-serum blood, all of which are forbidden for consumption according to kosher dietary law.” Kahan is associated with Parents Educating and Advocating for Children’s Health, or Peach, which distributed the pamphlets.

In a WAMC radio interview, Cuomo said, “Look it’s a serious public health concern, but it’s also a serious First Amendment issue and it is going to be a constitutional, legal question.” When asked about the measles outbreak, he said, “Do we have the right — does society, government have the right to say ‘you must vaccinate your child because I’m afraid your child is going to infect my child, even if you don’t want it done and even if it violates your religious beliefs?’ So that is, that’s an issue that’s going to be legally questionable and I’m sure it is going to go down that path.”

According to the National Vaccine Information Center, some forms of the measles vaccine are ultimately linked to cells obtained from aborted babies. The center’s website noted that the commonly used the pharmaceutical company Merck's ProQuad vaccine is recommended for individuals aged 12 months to 12 years of age. It is a live virus containing measles, mumps, rubella, and varicella viruses. It said that it contains the Oka/Merck strain of varicella-zoster [chickenpox] virus “propagated in MRC-5 cells,” that “are derived from a cell line that was developed in 1966 from lung tissue taken from a 14-week aborted fetus and contains viral antigens.”

The National Catholic Bioethics Center recommends that parents and patients should ask their physicians whether any recommended vaccinations have historical connections to abortion. If so, they should seek alternatives.