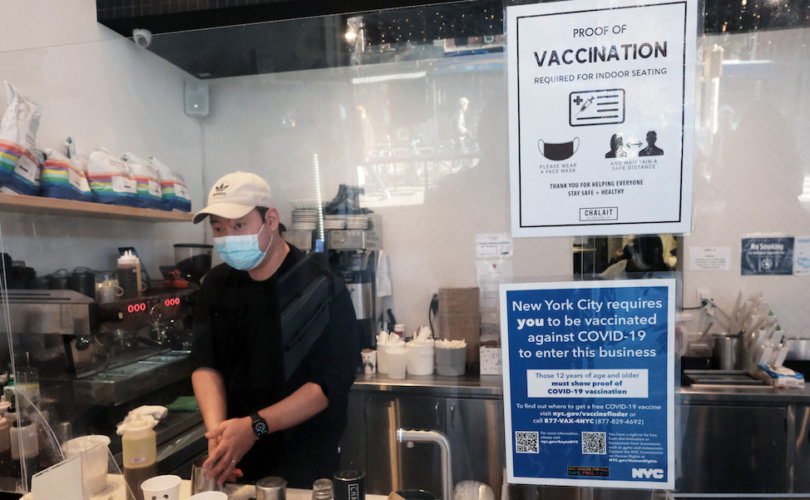 Adams said in a statement Sunday that the mandate will end March 7 as long as COVID numbers “show a low level of risk and we see no surprises this week.” Other vaccination requirements, including for one for all employees in the city, will stay in effect, the Democrat said.

Adams also said that his administration will lift an indoor mask order for public schools next Monday, barring “unforeseen spikes.”

Around 96 percent of adults in New York City are currently at least “partially vaccinated,” according to CNBC.

The city’s employer jab mandate still applies to Brooklyn Nets star Kyrie Irving, an unspoken opponent of the COVID-19 shots who refuses to get injected. Adams stressed Monday that he would not grant an exception to Irving, who remains unable to play home games due to his vaccination status.

Unvaccinated players from other teams can play at Brooklyn’s Barclays Center, however, according to NBA policy.

Hochul and Adams join a wave of Democratic officials across the country abruptly dropping mandates ahead of midterm elections while vowing to bring them back at any time depending on future COVID developments.

The White House said Monday that it will relax mask requirements for “fully vaccinated” people ahead of Tuesday’s State of the Union address. The U.S. House of Representatives similarly announced this weekend that masks will be optional on the House floor starting Tuesday.

New York also follows several Democrat-led cities, including Seattle and Boston, that have dropped short-lived COVID vaccine mandates for businesses in recent days. Washington D.C. Mayor Muriel Bowser ended a month-long jab requirements for restaurants and other public-facing businesses last month, though the shots will still be mandatory for school children in the district.

COVID inoculation does not stop the spread of the virus, and recent data has shown that “vaccinated” people have had higher infection rates than the unvaccinated and have driven unprecedented COVID-19 spikes around the world since the emergence of omicron.

The shots have repeatedly been linked to serious side effects, such as the immune disorder Guillain Barré Syndrome and potentially fatal heart conditions, like myocarditis. COVID remains a treatable illness for most people who contract it, with an estimated survival rate of 99.7 percent or higher for those under age 60.