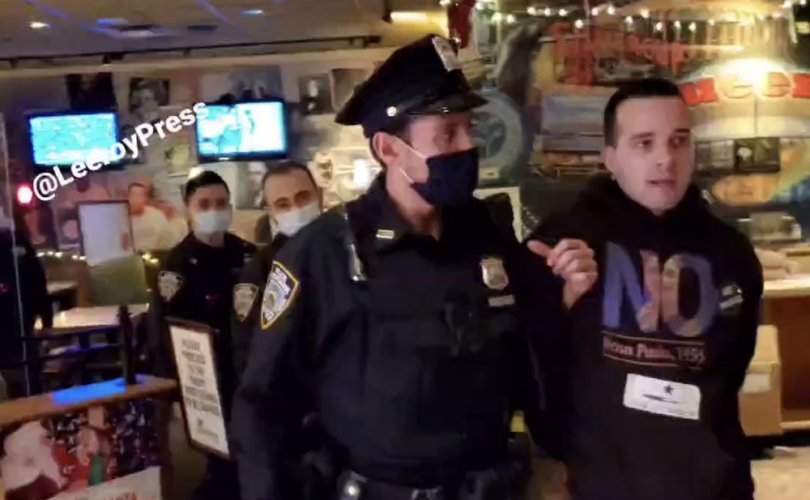 The four would-be-diners were arrested at an Applebee’s restaurant in Queens, New York, where they were staging a sit-in to protest a citywide mandate requiring individuals to show proof of vaccination as a condition of entry to public establishments.

Videos show the protestors being surrounded by law enforcement officers and arrested with their hands zip-tied behind their backs, then taken outside where they are loaded up into the back of a police van [Warning: foul language]:

#BreakingNews multiple protesters against mandates were just arrested at Applebee's in queens NY for trying to order food at a vaxed only restaurants pic.twitter.com/adZ0qJybwC

Since August, all people entering indoor public spaces in New York City have been required to show proof of vaccination against COVID-19 in compliance with a mandate forwarded by the city’s outgoing Democratic Mayor Bill de Blasio.

Effective December 14, de Blasio expanded the mandate to require New Yorkers to get two shots instead of one (New Yorkers could previously be “partially vaccinated” with only one shot to access restaurants) and force children as young as five years old to present proof of vaccination following the Food and Drug Administration (FDA)’s November approval of the Pfizer jab for children ages 5-11 under an “emergency use authorization.”

“I want to eat, like the free American that I am,” one maskless protestor tells police as they move to arrest her inside the diner, according to a video shared on social media.

“This is unbelievable,” another says as he is marched outside by four masked officers.

Video also shows protestors chanting “No more mandates,” and “how dare you” at officers as another man, who is identified by the crowd as a veteran, is arrested while shouting, “hold the line, it’s the only way for change.”

“In America, guys, you have no freedom left, no rights at all,” a protestor says as police lead him to the police van outside the Applebee’s.

Multiple people arrested in NYC for trying to eat in Applebee’s without a vaccine pass pic.twitter.com/CsKX7yauEC

Another video captures protestors chanting “shame on you” and issuing a call for “love and freedom for all.”

After Protesters against mandates were arrested at the Queens center mall for doing a sit in Applebee's Protesters started changing " SHAME SHAME " to the #NYPD#BreakingNews #Breaking_News pic.twitter.com/ZzWyK5TiRg

Kyle Becker, CEO of BeckerNews.com and a former writer and associate producer for Fox News, called the arrests a “[v]iolation of Fifth Amendment Freedom to Travel” which were committed “without Due Process of Law.”

“Sue them all,” Becker suggested. “Throw in Wrongful Arrests while you’re at it.”

“Freedom of Assembly is also a Constitutionally protected right,” he added, asking, “should that not be clear enough for the ignoramuses trying to enforce this unlawful idiocy[?]”

Freedom of Assembly is also a Constitutionally protected right, should that not be clear enough for the ignoramuses trying to enforce this unlawful idiocy.

Insider reported that the Applebee’s arrests came just a day after six other individuals were arrested at a New York City Cheesecake Factory for attempting to order food without showing proof of vaccination.

This isn’t the first time New York’s harsh policy of cutting unvaccinated people out of public life has made headlines.

In September, Brazilian President Jair Bolsonaro was photographed eating a slice of pizza on a New York sidewalk because the city’s vaccination rules forbade him from entry to the establishment.

Bolsonaro was in New York for a meeting of the U.N. General Assembly, but was forbidden to eat indoors due to his vaccination status.

Vaccine mandates and COVID passport schemes like those implemented in New York City and San Francisco come in spite of the fact that there is strong evidence that the “vaccinated” are just as likely to carry and transmit the virus as the unvaccinated.

Meanwhile, the new “omicron” variant of COVID-19 appears to affect vaccinated people at a much higher rate than unvaccinated people, throwing skepticism on the notion that the jabs stave off infection.

A CDC study found that of the 43 omicron “cases” identified in the United States in early December, some 79% were “fully vaccinated,” and 14% of those had already gotten a booster dose.

One hospitalization and no deaths were reported in connection with the new variant. The hospitalized person had been “fully vaccinated.”