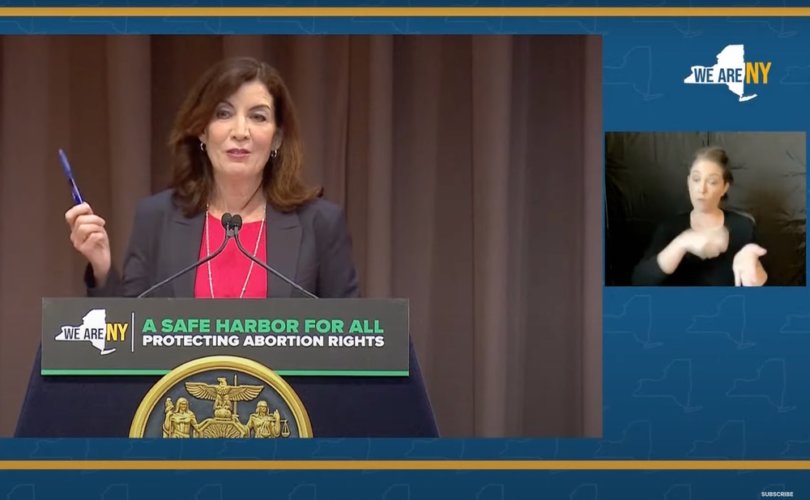 NEW YORK (LifeSiteNews) — New York’s pro-abortion Democrat governor Kathy Hochul called pro-lifers “Neanderthals” on Monday as she signed six new laws to protect abortion on demand in the Empire State in the event the U.S. Supreme Court overturns Roe v. Wade, the 1973 decision which established a federal “right to abortion” throughout all 50 states.

During a live-streamed signing ceremony June 13, the self-professed Catholic governor used apocalyptic language to describe the potential reversal of the federal “right to abortion.”

“My friends, the sky is literally on the verge of falling in the next week or two and that’s why we are here today,” Hochul said.

With the future of Roe v. Wade in jeopardy, we’re taking action to ensure New York remains a safe harbor for any person who needs an abortion — and the six bills I signed today do just that.

I refuse to go backwards, and as long as I’m governor, New York won’t. pic.twitter.com/jmwWTWqoQR

“This is the United States of America, where freedom and liberty are supposed to mean something,” continued the governor, who upon taking office maintained many of the draconian coronavirus mandates instituted by her predecessor Andrew Cuomo.

Hochul went on to accuse pro-life advocates of being “Neanderthals” for seeking to prevent the legal murder of unborn infants.

“It’s the rock upon which we were founded. It’s supposed to mean something except in the eyes of some Neanderthals, who think women are not entitled to those rights,” Hochul said.

“The right to control our own bodies is supposed to be settled by now, or so we thought,” Hochul added during the signing ceremony. The governor said the new laws are meant “to immediately protect abortion access and reproductive rights.”

In a June 13 tweet, Hochul added that her “message to those who are trying to take away the fundamental right to an abortion” is: “Not here. Not now. Not ever.”

This is my message to those who are trying to take away the fundamental right to an abortion: Not here. Not now. Not ever.

Kristen Curran, director of government relations for the New York State Catholic Conference, told Politico the laws will “encourage abortion tourism, rather than helping women and children who may be in need.”

“As a state that claims to value autonomy and choice, New York should stop presenting abortion as the best and only option for struggling women, and harassing any pro-life pregnancy center that may help women keep their babies. This abortion-or-nothing narrative only demeans women,” Curran said.

Hochul’s moves to promote unfettered abortion in the event that the Supreme Court overturns 49 years of abortion precedent comes as many Republican-led states have moved in the opposite direction. It’s estimated that roughly half of all states will ban or severely restrict abortion if Roe v. Wade falls, leading states on both sides of the abortion issue to take an oppositional legal posture toward one another.

Last year, Gov. Hochul took aim at Texas’ life-saving Heartbeat Act – which bans most abortions in the state – declaring that abortion will always be protected and easily accessible in the Empire State.

According to Hochul, New York’s “Lady Liberty” will be ready to “welcome” Texas women seeking abortions “with open arms.”

In 2014, Hochul’s predecessor Cuomo said of pro-lifers, “they have no place in the state of New York, because that’s not who New Yorkers are.”