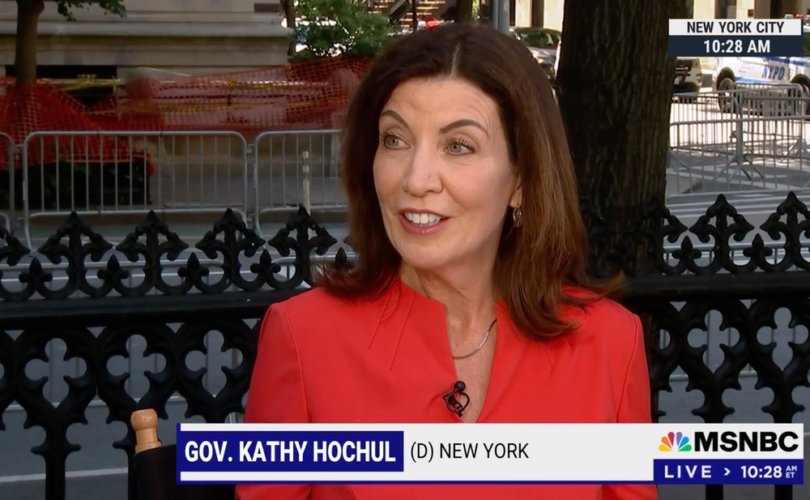 NEW YORK (LifeSiteNews) — Pro-abortion New York Gov. Kathy Hochul on Sunday assured American women that her state will be a “safe harbor” for abortion in the wake of the U.S. Supreme Court’s reversal of Roe v. Wade, which had established a constitutional “right to abortion” throughout the entire United States.

During an interview with MSNBC’s “The Sunday Show” on June 26, Hochul predicted a “flood” of “oppressed” women coming to the Empire State to abort their babies, and touted a $35 million investment into expanding abortion access in New York.

“We’re going to get a flood of people. I have declared this as our safe harbor,” Hochul, a Democrat and self-professed Catholic, said. “This is where we have the Statue of Liberty welcoming people who are oppressed. Women who cannot receive the fundamental right to control their body or receive an abortion. They are oppressed. They are welcomed here in the state of New York.”

The Supreme Court’s landmark pro-life decision in Dobbs v. Jackson Women’s Health Organization on Friday to overturn both Roe v. Wade (1973) and Planned Parenthood v. Casey (1992), declared that “The Constitution does not confer a right to abortion,” adding that “the authority to regulate abortion is returned to the people and their elected representatives.”

While many Republican-led states have moved to immediately enact bans or restrictions on abortions in light of the ruling, many Democrat states have instead opted to increase access and actively encourage “abortion tourism,” in which pregnant women in pro-life states are urged to travel to kill their unborn babies.

“This is New York. These rights are not going away. This is a place where we had abortion access three years before Roe v. Wade,” Hochul continued, referring to New York’s 1970 decriminalization of abortion up to 24 weeks’ gestation, which made the Empire State’s abortion laws the “most liberal” in the country at the time, according to The New York Times.

Hochul, who maintained many of the draconian COVID-19  mandates and restrictions instituted by predecessor Andrew Cuomo, went on to suggest that the Court’s decision to return the regulation of abortion to the people is “reprehensible,” adding, “Is this a police state? Is this where we cherish people’s freedoms? Or are we going to have government telling us what to do not just in our bedrooms and maybe take away the access to even contraception, which they telegraphed they would do.”

In his concurring opinion, Justice Clarence Thomas drew the ire of the Left for arguing that in addition to overturning Roe, the Court should also reconsider “all of this Court’s substantive due process precedents, including Griswold, Lawrence, and Obergefell.”

In Griswold v. Connecticut (1965), the Supreme Court ruled that the Constitution protects the right of married couples to use contraception.

“This is not wild speculation on our part,” Hochul said. “They said they would do that. As well as talk about making it a national law to ban abortion. My God. How have we fallen so quickly?”

Hochul’s comments come after she called pro-lifers “Neanderthals” earlier this month as she signed six new laws to protect abortion on demand.

With the future of Roe v. Wade in jeopardy, we’re taking action to ensure New York remains a safe harbor for any person who needs an abortion — and the six bills I signed today do just that.

I refuse to go backwards, and as long as I’m governor, New York won’t. pic.twitter.com/jmwWTWqoQR

Meanwhile, New York is not the only state setting itself up to profit from abortion as conservative states outlaw or restrict it within their borders.

On Friday, soon after the Supreme Court handed down its ruling overturning Roe v. Wade, the leftist governors of California, Oregon, and Washington released a joint statement announcing a pact to ensure women can still kill their unborn babies on the West Coast of the United States.

According to the “Multi-State Commitment” signed by Democratic Governors Gavin Newsom of California, Kate Brown of Oregon, and Jay Inslee of Washington, “all people seeking abortion and other reproductive health care services” will find “a safe haven” in their states.