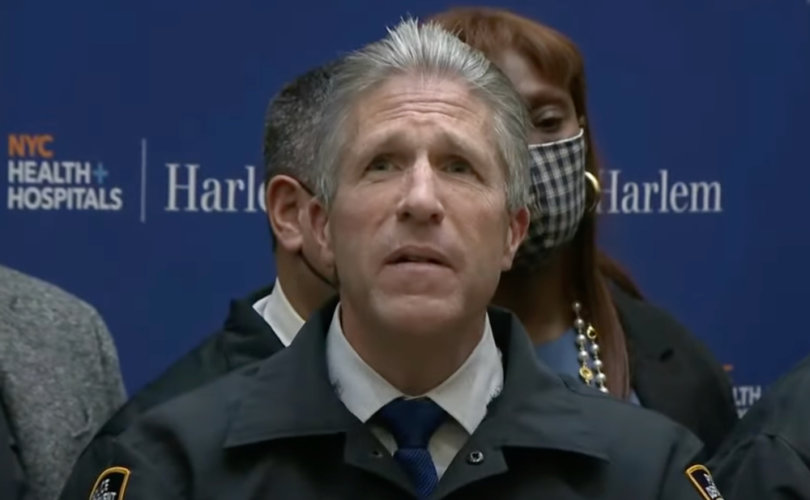 NEW YORK CITY (LifeSiteNews) – In a shock ruling, a New York judge ruled Friday that the city’s COVID-19 vaccine mandate for members of a police officers’ union was “invalid,” ordering any officers terminated because of it to be reinstated.

Justice Frank declared the city’s COVID shot mandate to be “invalid to the extent it has been used to impose a new condition of employment to current PBA members.”

Notably, Frank ordered that “members of the PBA that were caused to be wrongfully terminated and/or put on leave without pay as a result of non-compliance with the unlawful new condition of employment discussed above are directed to be reinstated to the status they were as of the date of the wrongful action.”

The PBA, led by president Patrick J. Lynch, had argued that the vaccine mandate violated the “New York City Charter and the New York City Administrative Code.” They also argued that the Department of Mental Health and Hygiene (DOH) Commissioner “exceeded his authority when ordering the mandate,” and that the mandate itself “violates administrative rulemaking requirements,” and even “lacks a rational basis.”

The Court did not rule entirely in the union’s favor, however, and rejected the PBA’s argument that the mandate contravened rule-making requirements.

In explaining why the court ruled against the mandate as applied to the PBA, Frank stated that he did not find the vaccine mandate illegal overall: “this Court does not deny that at the time it was issued the vaccine mandate was appropriate and lawful.” Frank deemed it to be “invalid” since the city authorities did not collectively bargain with PBA members.

At the same time, he added that: “the Court however does not see, nor have respondents established, a legal basis or lawful authority for the DOH to exclude employees from the workplace and impose any other adverse employment action as an appropriate enforcement mechanism of the vaccine mandate.”

CBS News and others reported that New York City officials immediately filed notice that they would appeal Frank’s decision.

Welcoming the ruling, PBA president Patrick Lynch issued a statement, saying it “confirms what we have said from the start: the vaccine mandates was an improper infringement of our members’ right to make personal medical decisions in consultation with their own medical health professionals.”

“We will continue to fight to protect those rights,” he closed.

New York City has been beset with harsh COVID related mandates since the onset of the COVID era. In February, over 1,400 city employees were fired for refusing to take one of the experimental COVID injections. The majority, over 900, were in public education and most of the entire 1,400 had gone without pay since November 2021.

In response to the draconian mandates, hundreds of city employees and first responders then took to the streets to protest the imminent firing of another 4,000 city employees. “Essential workers are essential for a reason,” said NYC firefighter Paul Schweit in a tweeted video. “They protect the citizens of New York City because they signed up to be of service.”

The number of municipal employees fired for refusing the injection rose to 1,750 by July, when leftist Mayor Eric Adams released figures for the first time since March. A further 6,000 city staff were also reported to still be waiting for the outcome of a religious exemption.

Millions of Americans remain hesitant to take the COVID-19 shots, which were developed and tested in a fraction of the time vaccines usually take under former President Donald Trump’s “Operation: Warp Speed” initiative, due in large part to the forced release of Pfizer data that the company had initially tried to keep from being released to the public until the year 2076.

Many Americans also have moral concerns over the injections, due to their incredibly intimate connection to abortion.

While COVID jab mandates have been widely pushed, the more impartial scientific community have long acknowledged the experimental shots don’t stop transmission of or infection with the virus.

Indeed, the Centers for Disease Control and Prevention (CDC) released its latest data Friday, listing a total of 1,418,220 reports of adverse events following COVID-19 vaccines, which were submitted between Dec. 14, 2020, and Sept. 16, 2022, to the Vaccine Adverse Event Reporting System (VAERS).

That figure includes a total of 31,074 reports of deaths and 258,480 serious injuries, including deaths, during the same time period.