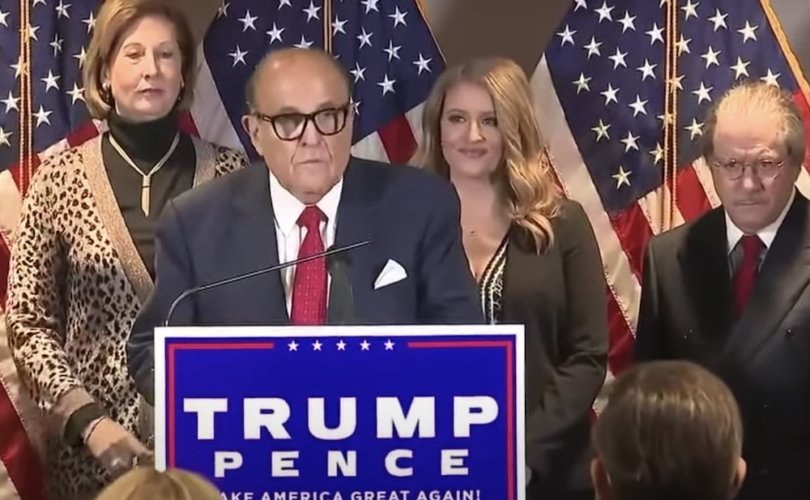 The judges claim Giuliani, also a former federal prosecutor who ran for president himself in 2008, made “false statements” to “improperly bolster” the “narrative that due to widespread voter fraud, victory in the 2020 United States presidential election was stolen from his client,” the New York Post reported. “We conclude that respondent’s conduct immediately threatens the public interest and warrants interim suspension from the practice of law, pending further proceedings before the Attorney Grievance Committee.”

For weeks after the election, Giuliani claimed he could “prove in court” a sufficient number of illegitimate ballots to show that Trump, not President Joe Biden, was the legitimate victor. But judges in several states consistently dismissed the various suits he and other pro-Trump attorneys brought, some rejecting their allegations while others cited process reasons for not taking cases.

“It’s a complete invasion of my First Amendment rights and my rights as an attorney, I’m allowed to have a client,” Giuliani responded to the Post. “President Trump is not allowed to have a lawyer, of course it’s a partisan hit. I didn’t do anything wrong. There’s nothing I said that a witness didn’t tell me. We’re getting to be like East Germany.”

“Can you believe that New York wants to strip Rudy Giuliani, a great American Patriot, of his law license because he has been fighting what has already been proven to be a Fraudulent Election?” Trump himself added. “The greatest Mayor in the history of New York City, the Eliot Ness of his generation, one of the greatest crime fighters our Country has ever known, and this is what the Radical Left does to him. All of New York is out of control, crime is at an all-time high—it’s nothing but a Witch Hunt, and they should be ashamed of themselves. TAKE BACK AMERICA!”

In April, FBI agents executed a search warrant on Giuliani’s office and apartment, ostensibly part of a criminal investigation into whether he illegally lobbied the Trump administration on behalf of Ukrainian officials. Giuliani described the agents as “apologetic” and “gentlemanly,” but noted that they had no interest in three hard drives containing data from presidential son Hunter Biden’s infamously-discarded computer that Giuliani had in his possession.

“I looked at the warrant, and I said, ‘You know, this is extraordinary because I offered to give these to the government and talk it over with them for two years,’” Giuliani told Fox News’s Tucker Carlson at the time. “The evidence is exculpatory. It proves the president and I and all of us are innocent. They are the ones who are committing — it’s like projection. They are committing the crimes.”