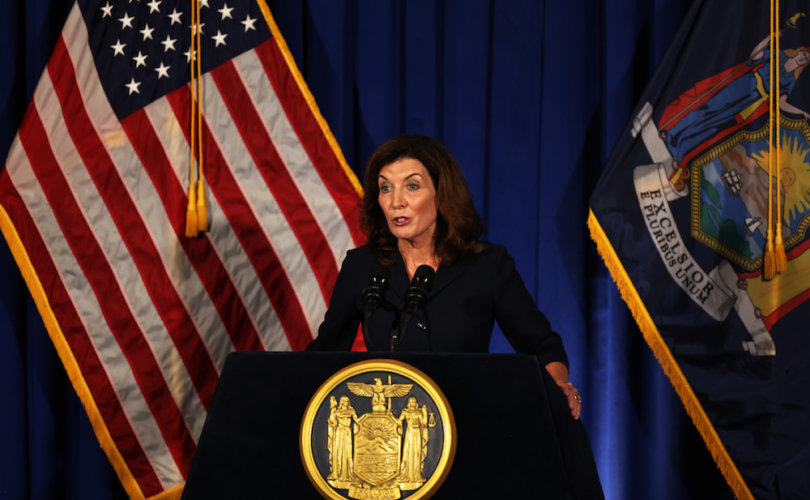 NEW YORK (LifeSiteNews) – New York Democrat Gov. Kathy Hochul’s mask mandate for schools and other public spaces is back in effect after a state judge halted a lower-court ruling that struck down the mandate yesterday.

The mask mandate “is a law that was promulgated and enacted unlawfully by an executive branch state agency, and therefore void and unenforceable,” Rademaker found.

The case was brought by a group of parents who sued the governor and the New York State Department of Health to overturn the mask rule for schoolchildren.

The state health department imposed the mandate in December, requiring New Yorkers two years old and up to wear masks in all indoor public settings, citing a rise in cases with the milder Omicron variant. The order does not apply to businesses that require vaccination, though vaccinated people spread COVID-19.

Rademaker noted that Hochul enforced the measure, but could not issue it herself, as New York lawmakers curbed governors’ emergency powers last year amid outrage over former Gov. Andrew Cuomo’s deadly mishandling of COVID-19 in nursing homes.

Hochul said Monday that she “strongly” disagreed with the the judge’s decision and was “pursuing every option to reverse this immediately.”

The mandate is set to expire February 1. Hochul has not revealed whether she will extend it, as she did at the beginning of January.

“It’s time for the Gov to stand down and stop disrespecting the rights of students and parents,” tweeted Nassau County executive Bruce Blakeman, who signed an executive order this month allowing local school boards and parents in Nassau County to decide whether to let kids wear masks.

“Mask decisions should be made by families and school boards. Not Albany politicians. Nassau is normal again and we will continue to lead the way as an example for the rest of the state,” he said.

NY’s statewide mask mandate was ruled illegal & unconstitutional in court yesterday. Yet, Kathy Hochul’s incredibly inflated ego, & intoxication on power has her claiming her order will stay. She has ZERO respect for our constitution, laws, children, or judges.

Various studies, including large randomized controlled trials, have shown that mask mandates do not stop the spread of COVID-19. Research has also found that masks harm children, causing them to breathe dangerous levels of carbon dioxide and potentially devastating their cognitive development.

Around 0.01 percent of COVID cases across the U.S. under age 18 have resulted in deaths, according to the American Pediatric Association.