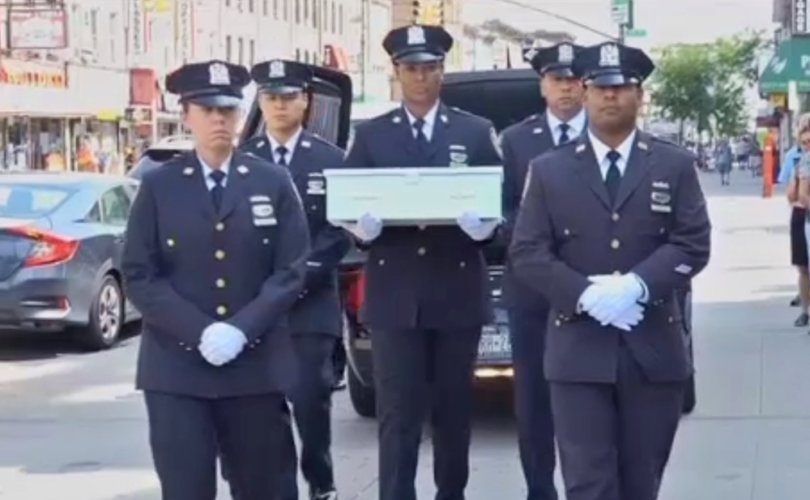 NYPD officers carry in the remains of a discarded baby to the Basilica of Our Lady of Perpetual Help in Bay Ridge, June 29, 2019. Brooklyn News 12 / video screen grab

July 4, 2019 (LifeSiteNews) – A baby girl born prematurely and discarded on a Brooklyn street earlier this year has been named and this past Saturday was given a funeral and proper burial with local law enforcement taking part in the ceremony.

The Life Center of New York offered to provide a funeral for baby Monica, named after St. Monica, the mother of Saint Augustine, the New York Daily News reports. Members of the pro-life group said the name Monica was chosen because Augustine’s mother is said to have told her family on her deathbed, “you will remember me at the Lord’s altar, wherever you be.”

“We decided to give her that name,” said Fred Trabulsi, one of the funeral organizers. “Baby Monica, like all of us, deserves dignity and respect in living and dying.”

Six NYPD officers were pallbearers for Monica’s service at the Basilica of Our Lady of Perpetual Help in Sunset Park, Brooklyn, the New York Daily News report said, processing her little casket past parishioners and members of the Life Center of New York, while an NYPD officer played a solemn bagpipe.

Baby Monica had been found dead under a tree near the Nathaniel Greene School in East New York in February. She was inside a bag encircled by bloody clothing, according to witnesses. The city medical examiner estimated she was about 20-weeks old and would not have been viable outside the womb.

A cause of death for baby Monica was not immediately released, though it’s been thought that her mother miscarried, deciding to dispose of her and not tell family or authorities.

Trabulsi received the remains from the medical examiner’s office about a week before the service following completion of all the necessary tests.

Life Center of New York supports women in crisis pregnancy, striving to help them make a choice for life.

“As we are living in a “culture of death” and a throwaway society, the Life Center wants to show that life is sacred from beginning to end,” the group’s website says of its efforts the honor baby Monica, “praying that what we do here will advance the culture of life.”

Some parishioners from Our Lady of Perpetual Help parish attended the funeral to pay respects to baby Monica.

“It was a beautiful Mass,” said Theresa Tuhoy. “It was very sad. They wanted to give her a proper burial.”

“It’s very sad to see what’s going on,” Mercedes Jerez said. “(But) this is our community. We’re together.”

Baby Monica was escorted to Resurrection Cemetery in Staten Island, where she was buried in the Guardian Angel section of the cemetery, which is dedicated to stillborn and abandoned babies. The Life Center of New York will have a cemetery stone placed with her name inscribed on it.

“Please remember to pray for Baby Monica's mother,” the pro-life group’s website entreats visitors, “who, like Baby Monica and countless others, is a victim of the culture of death that has darkened our city, state and nation.”