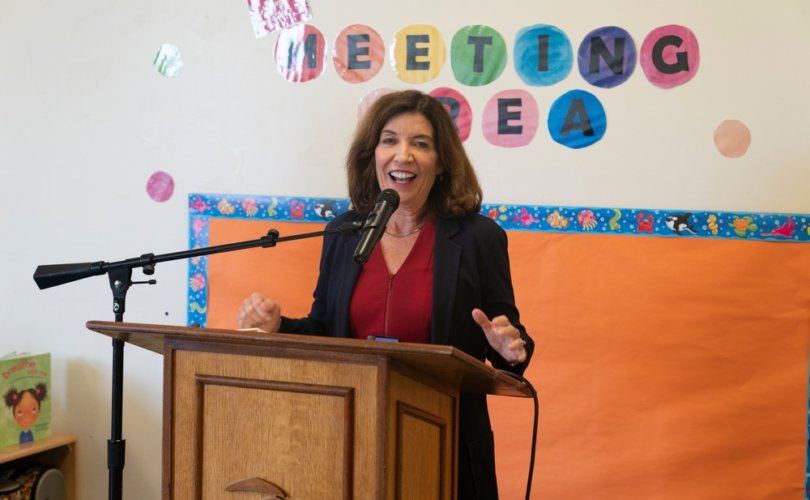 ALBANY, New York (LifeSiteNews) – New York will join California in outlawing all new gas-powered car sales by 2035, according to an announcement from Democrat Governor Kathy Hochul.

Hochul ordered the “State Department of Environmental Conservation to take major regulatory action that will require all new passenger cars, pickup trucks, and SUVs sold in New York State to be zero emissions by 2035,” her office announced on September 29.

— Article continues below Petition —
Stand with pro-life Catholic dad of 7 raided by Joe Biden's FBI
Show Petition Text
6767 have signed the petition.
Let's get to 7500!
Thank you for signing this petition!
Add your signature:
Show Petition Text

The effort is being supported by hundreds of millions of dollars in taxpayer subsidies. “This is a crucial regulatory step to achieving significant greenhouse gas emission reductions from the transportation sector and is complemented by new and ongoing investments also announced today, including electric vehicle infrastructure progress, zero-emission vehicle incentives, and ensuring New York’s communities benefit from historic federal climate change investments,” her office stated. The subsidies include $175 million in federal taxpayer funds to build more electrical vehicle charging stations.

READ: Like COVID-19, climate alarmism is a tool global elites wield to control our lives

The state will spend at least $250 million of its taxpayers’ money as well, The Daily Wire reported.

For Hochul, this is not just an environmental issue, but also a social one. She referenced during her press conference on September 29 that there have been electric vehicles “over a hundred years” in New York. She said car manufacturers built electric vehicles so wives could “have some freedom” from “domestic servitude” while their husbands were at work. The electrical vehicles “gave women the freedom to drive,” since gas-powered cars were difficult for women to operate due to the heavy crank start.

A policy analyst with the Committee for a Constructive Tomorrow, a free-market environmental advocacy group, said that getting rid of gas-powered cars shows how elites have “contempt” for rural Americans.

“None of this march away from reliable, proven ICE [internal combustion engines] makes any sense to rural Americans, those who live in hurricane-prone areas, and anyone who drives cross-country,” Duggan Flanakin wrote. “Farmers today can run their tractors off biodiesel made right down the road and drive to distant towns for groceries and supplies in their 20-year-old pickups. Hurricanes, earthquakes, and other natural and human-caused disruptive events can shut down electric power for days in large areas. ”

“Imagine if 200 million internal combustion engine vehicle owners (or even 2 million) decided to work together to fight against the outrageous, unworkable, antidemocratic, and bankrupting mandates to force everyone into electric vehicles most cannot afford and do not want and to effectively exclude billions from being allowed to drive at all!” he wrote.

New electric vehicles range in cost from $27,000 to $181,000. Even liberal groups like Amnesty International have criticized electric car makers for their reliance on child labor to mine cobalt. Tesla owners also face the risk of their electric vehicles spontaneously combusting due to their lithium batteries.