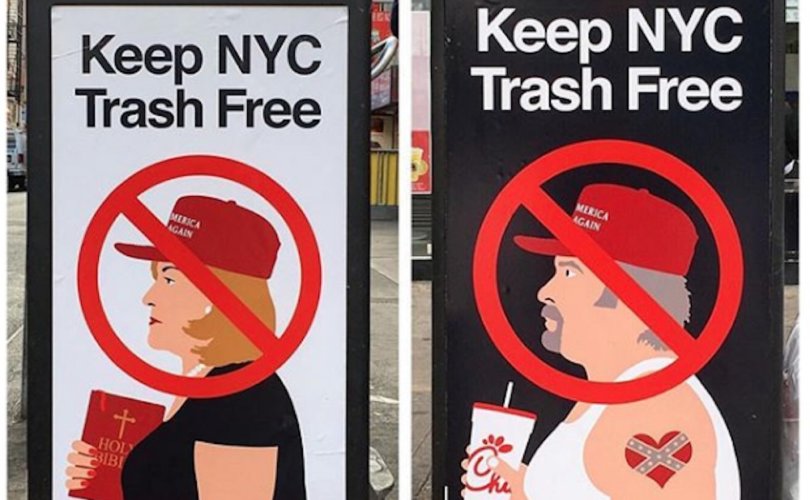 NEW YORK CITY, October 29, 2018 (LifeSiteNews) – Over the past few days New Yorkers have been shocked and appalled by new signs claiming to be from the city sanitation department, identifying Trump supporters and socially-conservative Christians as “trash” who don’t belong in the Big Apple.

One features a stereotypical redneck with a Confederate flag tattoo holding a Chick-fil-A drink cup; the other shows a woman holding a Bible. Both are wearing President Donald Trump’s iconic red “Make America Great Again” caps, with a “No” symbol over their faces. MassLive reports that a third poster takes aim at Boston Red Sox fans. All the posters are believed to have been put up on Wednesday.​​

This NYC trash can is telling #MAGA types where they can go: https://t.co/T5E9yg9CRF #KeepNYCTrashFree pic.twitter.com/eGrhPyKXJ6

I’m a Christian woman who voted 4 @realDonaldTrump. According to the people of Manhattan, that makes me trash #KeepNYCTrashFree #HateSpeech pic.twitter.com/ozFzdSDELg

Hey NYC sanitation department, you’ve got some explaining to do. A friend of mine sent this to me today, from a midtown subway.

Cute gesture, but doesnt go far in my book. pic.twitter.com/DI5ZHfyWwr

PIX adds that some but not all of the posters have already been taken down, though questions remain as to who’s responsible for them.

Some have noticed their style is similar to “Your Train Is Delayed” parody posters by New York artist Winston Tseng:

Your Train Is Delayed – Poster https://t.co/kFwWmADdxB

Tseng told The Gothamist only that he would “let the poster speak for itself,” but denied any involvement in response to PIX.

“For the record, I didn’t create or put up these posters,” Tseng claimed. “But if I did, I wouldn’t want people to take them so seriously, since they’re meant to reflect certain parts of our society and not meant to generalize beyond those. I’d just want the intended audience of my fellow ‘classist elitist New Yorkers’ to hopefully be entertained by the ‘unhelpful, tone-deaf message’ as they go about their day in this trash filled liberal bubble.”

While these latest posters didn’t come from the city, state officials in New York have expressed similar sentiments in the past.

In April, New York Supreme Court Justice David Cohen ruled that bars have the right to throw out customers for supporting Trump. In 2014, the state’s Gov. Andrew Cuomo, an aggressively pro-abortion Democrat, infamously declared that “right-to-life” supporters “have no place in the state of New York.”

Chick-fil-A has also been a recurring target in big left-wing cities for the Christian view of marriage and homosexuality articulated by the fast food chain’s owners. In April, New Yorker columnist Dan Piepenbring called on the Big Apple to boycott the company over its “pervasive Christian traditionalism.”