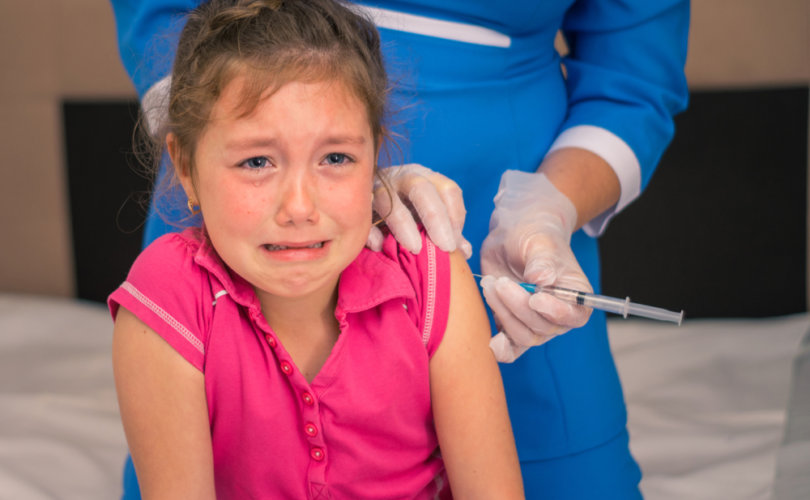 ALBANY, New York, June 3, 2020 (LifeSiteNews) – A committee of the New York State Bar Association (NYSBA) wants the association to demand all United States residents be injected with a coronavirus vaccine. The new report from the association’s health law section dealing with the question of mandatory vaccinations was published on May 13.

“When the efficacy of a COVID-19 vaccine has been confirmed, enact legislation requiring vaccination of each person unless the person’s physician deems vaccination for his or her patient to be clinically inappropriate,” recommends the committee of NYSBA, an organization of over 24,000 lawyers whose stated goal is “to shape the development of law.”

All recommendations will be discussed “at a virtual meeting of the association’s governing body, the House of Delegates, on June 13.”

“When a vaccine becomes available, there will be a majority of Americans who want the vaccination,” the NYSBA committee predicted in its report, referring to statistics of the Centers for Disease Control and Prevention (CDC).

However, the CDC statistics have nothing to do with a potential coronavirus vaccine.

They only show that in 2017, 70.4 percent of children aged 19-35 months received the combined 7-vaccine series ranging from diphtheria and tetanus all the way to chickenpox. As far as individual vaccines are concerned, the immunization against polio had the highest coverage at 92.7 percent.

While admitting that “some Americans may push back on the COVID-19 vaccination for religious, philosophical or personal reasons,” the NYSBA committee nonetheless argues that “for the sake of public health, mandatory vaccinations for COVID-19 should be required in the United States as soon as it is available.”

“Constitutional challenges under the religious freedom clause under the First Amendment and under the substantive due process clause of the Fourteenth Amendment have failed, when the individual interests are not strong enough to outweigh the public benefit,” they added.

The report went on to summarize court rulings within the state of New York.

“Healthcare workers and parents of unvaccinated children have unsuccessfully challenged compulsory vaccination on administrative law grounds – questioning the NYS and NYC Department of Health’s authority in mandating flu and measles vaccinations, as well as challenging the regulations as arbitrary and capricious,” the lawyers wrote.

“The courts found the policies mandating that healthcare workers be vaccinated for influenza, and children vaccinated for measles during an outbreak, were not arbitrary and capricious and the regulations were promulgated under proper authority.”

The report argued that the alleged gravity of the coronavirus pandemic “presents compelling justification for State legislatures and Congress to mandate a COVID-19 vaccination.”

The report also pointed to several bills on the federal level that have been introduced more recently. Specifically, the “Vaccinate All Children Act of 2019” would force states, if they want to receive federal funding, to “require each student in public elementary or secondary school to be vaccinated,” while only allowing medical exemptions.

“The history of unsuccessful attempts to challenge mandatory vaccinations may reduce the extent of opposition,” the report stated.

President Trump indicated last month, however, that a future coronavirus vaccine would be voluntary.

Any new vaccine would be for those “who want to get it,” he said on May 15 in remarks on vaccine development, adding, “Not everyone is going to want to get it.”

Catholic leaders have emphasized that the Church objects on moral grounds to any vaccines developed from material derived from aborted babies.

Most prominently, Archbishop Carlo Maria Viganò, in his “Appeal for the Church and the world to Catholics and all people of good will” released last month, said, “Let us also remember, as Pastors, that for Catholics it is morally unacceptable to develop or use vaccines derived from material from aborted fetuses.”

Viganò warned the pandemic could be used as “the pretext for supporting the hidden intentions of supranational bodies that have very strong commercial and political interests in this plan.” He stressed that in this context, “citizens must be given the opportunity to refuse these restrictions on personal freedom, without any penalty whatsoever being imposed on those who do not wish to use vaccines, contact tracking or any other similar tool.”

The appeal was signed, among others, by German Cardinal Gerhard Müller, the former Prefect of the Congregation for the Doctrine of the Faith, Bishop Athanasius Schneider, and Bishop Joseph Strickland of Tyler, Texas.

June 3, 2020, 4:51 PM EST correction: This report originally indicated that the NYSBA was demanding mandatory vaccination. However it has now been corrected to state that it is a committee of the NYSBA making a proposal for the NYSBA to adopt a policy calling for mandatory COVID-19 vaccination.