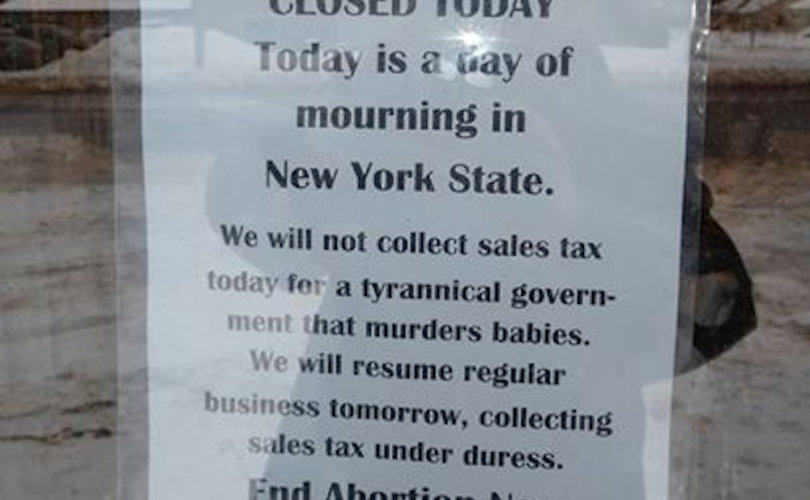 SYRACUSE, New York, January 23, 2019 (LifeSiteNews) — A bookstore owner shuttered his shop on Wednesday after a radical abortion bill was passed “for a day of mourning in New York” to send a message to the Democrat-controlled state legislature and Gov. Andrew Cuomo “because I understand that murder is wrong.”

Jon Speed, a Christian, said he wanted to keep sales tax dollars from going to the government for at least one day at his shop, The Book Scout.

Emphasizing the store closure was not for publicity, he said, “I can’t change what happened (Tuesday), but I can certainly register my displeasure with it and how upset about it I am.”

Echoing the central message of Friday’s March for Life “Unique from Day One: Pro-Life is Pro-Science,” Speed told Faithwire that he understands from prenatal science and the Bible  that a “baby in the womb is a baby, it’s a human life.” He said politicians will have to answer to God for promoting abortion.

Wow! Jon Speed, a used book store in New York, has closed in protest of the passing of unrestricted abortion in the state.

In a 38-24 vote, New York’s state senate passed the Reproductive Health Act, which had been previously blocked when Republicans controlled the chamber. The legislators erupted into thunderous applause to congratulate themselves over passing the bill. Gov. Cuomo signed the bill and celebrated by ordering the World Trade Center and other state landmarks to be illuminated in pink on Tuesday evening.

The bill legalizes abortion in most circumstances all the way to birth, ambiguously stating that unborn babies may be killed “within 24 weeks of the start of a pregnancy, or at any time when necessary to protect a woman’s life or health.” Non-physicians are now enabled to perform abortions, and persons who cause a woman to lose an unborn child are shielded from prosecution.

Democrats fear that the U.S. Supreme Court may address the 1973 Roe v. Wade decision that allowed abortion nationwide. New York as a state legalized abortion in 1970.

Speed told Faithwire that the New York law annuls the “safe, legal and rare” standard set during President Bill Clinton’s administration, saying abortions are “certainly not going to be rare” in the Empire State.