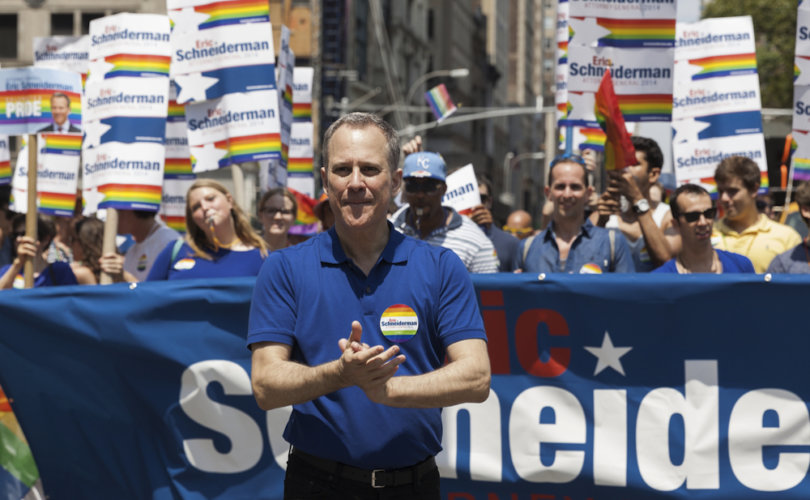 Schneiderman filed a federal lawsuit this week against those who stand up for preborn children by praying and counseling outside a Queens abortuary.

Schneiderman called the pro-life protest outside Choices in Queens “illegal” because he says it “obstructs” abortion patients from entering the abortion business. “We’ll do what it takes to protect those rights for women across New York,” he vowed.

The state attorney general did not explain why he was seeking another “bubble zone” law when the U.S. Supreme Court has ruled such laws unconstitutional.

In 2014, the highest court in the nation unanimously struck down a Massachusetts buffer zone law, describing it as “closing a substantial portion of a traditional public forum” and therefore against the First Amendment.

The American Civil Liberties Union stood against such a law proposed in Columbus, Ohio. The ACLU admitted, even though it is one of the more liberal, pro-abortion organizations in the country, that laws restricting peaceful protests outside abortion clinics have “serious free speech implications.”

“Almost all speech has the potential to annoy, alarm, or inconvenience others no matter who is speaking, the content of the speech, or their intended audience,” the ACLU of Ohio reasoned in a letter to the Columbus City Council. Therefore, “we question the wisdom and ultimate constitutionality of prosecuting those who ‘alarm,’ ‘annoy,’ or ‘inconvenience’ another as those terms are entirely subjective.”

The ACLU warned, “Establishing a precedent that mere words directed at a person can and will result in prosecution is antithetical to the First Amendment right to free speech benefiting us all,” and added that a “buffer zone will undoubtedly restrict the free speech rights of those sidewalk counselors who wish to deliver one-on-one, but peaceful and non-physical, pleas to those entering reproductive healthcare facilities.”

Abortion business volunteers Teresa White, Margo Garnick and Pearl Brady worked with Schneiderman for a year and a half to build a case against the sanctity of life defenders. The Huffington Post reports that abortion workers across the country are pinning their hopes on this lawsuit to set a pattern for clinics nationwide.

Specific offenses cited are protesters showing pictures of aborted babies, talking to patients as they approach the clinic, preaching outside the clinic on the public sidewalk, and offering pamphlets to women and their boyfriends or husbands.

Pro-lifers won a First Amendment court battle against buffer zones in Jackson, Mississippi, which specifically acknowledges the constitutional right to show pictures of aborted babies and speak their opinion on public property outside abortion mills.

1
A legacy of scandal: Pope Francis says he has ‘carried out’ plans laid during ‘pre-Conclave meetings’
2
Mass hypnosis: why can’t people see through the COVID deception?
3
Abp. Viganò: Global liberalism and Communism are destroying the Church and society from within
4
Dutch farmers fight for their livelihoods against government plans
5
Dr. Vladimir Zelenko was a true hero and patriot who saved many lives with his COVID treatment
Subscribe to Daily Headlines »