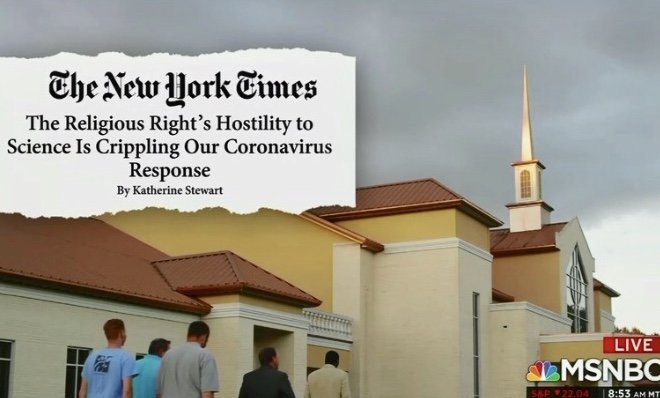 April 6, 2020 (LifeSiteNews) – The author of a New York Times opinion piece asserting that conservative Chrisitans deserve the blame for the coronavirus crisis in the United States doubled down on her accusations in an MSNBC interview.

When first published, the article by Times journalist Katherine Stewart bore the incendiary headline, “The Road to Coronavirus Hell Was Paved by Evangelicals,” but was later toned down a notch, declaring, “The Religious Right’s Hostility to Science Is Crippling Our Coronavirus Response.”

The article strongly suggested that “Trump’s response to the pandemic has been haunted by the science denialism of his ultraconservative religious allies.”

Stewart’s opening paragraph featured a generalization of Trump supporters, arguably reminiscent of Hillary Clinton’s infamous description of half of Trump’s supporters as belonging in a “basket of deplorables” during the 2016 presidential election campaign.

“Donald Trump rose to power with the determined assistance of a movement that denies science, bashes government and prioritized loyalty over professional expertise,” wrote Stewart, before informing readers that “in the current crisis, we are all reaping what that movement has sown.”

In her MSNBC interview four days later, Stewart’s tone remained bombastic while her continued unselfconscious disdain for conservative Christians was on clear display.

“Hey, guess who MSNBC and The New York Times think are to blame for the coronavirus?” wrote Newsbusters’ Alex Christy concerning the interview.  “If you guessed Christians, you're right!”

“My concern here is not with any particular religious creed, but with a political movement that often cloaks itself in religious rhetoric,” Stewart told MSNBC interviewer Ayman Mohyeldin. “There are a number of ways in which the religious right bears some responsibility for the current incompetence in our national response.”

“First and foremost, the movement promotes an anti-science culture that rejects the evidence of science, rejects expertise and critical thinking, and that has obviously contributed to our ability to address this issue and this crisis in an evidence-based fashion,” she continued. “Misinformation is rife in these sort of hyper-conservative and highly politicized religious communities that were all in for Trump.”

“The movement has allied itself completely with a kind of libertarian far right economic wing of the Republican Party. So it shares some of the blame that falls on that group. Religious nationalists have also supported politicians and policies that have led to the privatization of health care and the hollowing out of the social safety net,” added Stewart.

In her Times article, Stewart asserted that “the failings of the Trump administration in the current pandemic are at least as attributable to its economic ideology as they are to its religious inclinations,” but even in this regard she claims that “Christian nationalism played a major role in creating and promoting the economic foundations of America’s incompetent response to the pandemic.”

“Absent from Stewart’s article is any developed argumentation either that the Trump administration’s response to the coronavirus pandemic has in fact been incompetent – the closest she gets to that is her suggestion that the United States compares badly with South Korea and Germany in terms of its testing regime – or that identifiable Christian principles have influenced such a poor response,” noted LifeSiteNews’ Paul Smeaton last week.