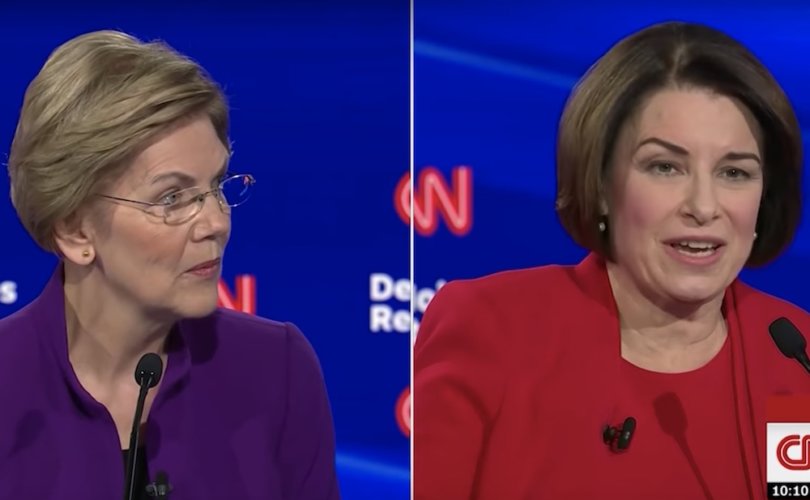 January 20, 2020 (LifeSiteNews) – The New York Times editorial board took the unprecedented step Sunday of endorsing two of the Democrats running for their party’s presidential nomination, Sens. Elizabeth Warren of Massachusetts and Amy Klobuchar of Minnesota, arguing they each represent two different models of advancing the progressive agenda.

“The history of the editorial board would suggest that we would side squarely with the candidate with a more traditional approach to pushing the nation forward, within the realities of a constitutional framework and a multiparty country,” the editorial reads. “But the events of the past few years have shaken the confidence of even the most committed institutionalists. We are not veering away from the values we espouse, but we are rattled by the weakness of the institutions that we trusted to undergird those values.”

Therefore, the Times has opted to endorse the two women as the “most effective advocates” for two dueling paths: a “radical” model of “new ideas,” and a “realist model” that offers “stability.”

Warren, the paper says, is a “gifted storyteller” who is “committed to reforming the fundamental structures of government and the economy” not just by increasing government spending in myriad areas, but with initiatives to “wean the American economy from fossil fuels” and “reduce the economic and political power of large corporations,” as well as a “sweeping expansion of government support for Americans at every stage of life” (with the notable exception of the nine months before birth).

Klobuchar, meanwhile, is a “standard-bearer for the Democratic center” who the Times believes may stand the “best chance to enact many progressive plans” precisely due to her record of working with lawmakers of both parties. “Ms. Klobuchar speaks about issues like climate change, the narrowing middle class, gun safety and trade with an empathy that connects to voters’ lived experiences, especially in the middle of the country,” the endorsement reads.

“The next president will shape the direction of America’s prosperity and the future of the planet, perhaps irrevocably,” the Times declares. It claims that President Donald Trump is a “threat to democracy” because he requested that the Ukrainian government investigate former Vice President Joe Biden’s role in the firing of a Ukrainian prosecutor who had been investigating his son Hunter’s business dealings in the country.

Conservatives responded to the split endorsement with widespread mockery, as well as speculation regarding The New York Times’ true motives:

NYT editorial board deserves the ridicule for rollout of we-can't-decide endorsement. But also deserve some credit for acknowledging that Sanders and Biden are too old to be president and Buttigieg is too young. https://t.co/MixnuehR7c

The Times which is part of the establishment didn’t back Biden bc they don’t want to feel the wrath of the crazy progressive base.

Also I know person in Times newsroom. Entire place is beyond woke, and the last few decent libs are afraid to speak.

Don't be fooled, NYT endorsed Warren. They threw Klobuchar in there because because they knew everyone expected them to pick Warren, and they know Klobuchar doesn't have that great of a chance.

Well the NYT just threw another monkey wrench in the democrat works by a couple of presidential endorsements
Elizabeth Warren and Amy Klobuchar?
If that ain’t the chicken’s way out, they don’t even have the guts to pick one candidate
Bloomberg might buy the NYT and fire you all

Are we sure it’s Trump who turned our politics into a reality show?

Despite the perception, reinforced by the Times editorial, that one of the two is a purer progressive while the other is a centrist, both Warren and Klobuchar are doctrinaire liberals on abortion and LGBT issues who have vowed to marshall the powers of the presidency, including judicial appointments on behalf of both causes.