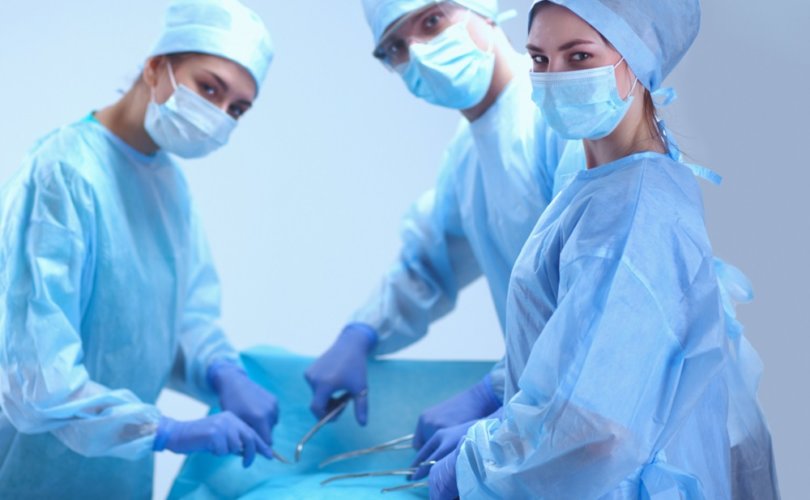 (LifeSiteNews) — “Transgender top surgeries,” in which a female’s breasts are amputated to relieve distress due to their womanly appearance, have reportedly “exploded” among minors in recent years.

While there are “no official statistics on how many minors receive double mastectomy ‘transgender top surgeries’ each year” in the U.S., the numbers that are available indicate that such operations have skyrocketed over the past few years, according to a New York Times article published on Monday.

The Times cited, as an example, numbers from Kaiser Permanente Oakland Medical Center in California, which reportedly performed 70 “top surgeries” on teenagers in 2019, a dramatic increase from its five teenage “top surgeries” in 2013.

“I can’t honestly think of another field where the volume has exploded like that,” Dr. Karen Yokoo, a retired plastic surgeon at the hospital, told the Times.

A NYT survey of 26 “leading pediatric gender clinics” in the U.S. found that “many reported long waiting lists” for adolescent “top surgeries.” Eleven clinics reported a total of 203 procedures on minors in 2021, but this is only a fraction of the total number of teen “top surgeries” for that year. Nine clinics declined to respond altogether, and six shared that they referred patients to private practice surgeons.

The evidence of a spike in “top surgeries” for minors reflects a corresponding rise in self-identified “transgender” teens, as well as young adults. According to the Williams Institute, about 700,000 people under 25 identified as transgender in 2020, which it says is almost double the estimate from 2017.

According to experts, this explosion in self-identification as “transgender” is largely driven by social media, mainstream media, and peer influence. For example, Dr. Lisa Littman published a landmark study on Rapid Onset Gender Dysphoria in 2018 that found that 86.7% of the parents of gender-dysphoric teenagers reported that the gender dysphoria coincided with an increase in internet/social media use, or the self-identification of a friend of that teen as “transgender,” or both.

In addition to peer and cultural influence, the stories of people who regret a past gender “transition” often share that their attempt to change their sex was a kind of “band-aid” approach to dissociate from emotional distress and even trauma.

Jalisa Vine, in a heartbreaking testimony on how gender surgeries ruined her life, explained, “The majority of my life so far has been a trauma response. My whole identity has been rooted in trauma…My transition was a trauma response.”

Similarly, Grace Lidinsky-Smith, who received “top surgery” at the age of 23 and “de-transitioned” about 16 months later, explained in an interview, according to the New York Times, “I slowly came to terms with the fact that it had been a mistake born out of a mental health crisis.”

Despite such stories of regret over “gender transition,” the psychological immaturity of teens, and the permanent damage inflicted by “top surgeries” such as removing the possibility of breastfeeding future children, doctors and parents continue to facilitate such “top surgeries” for minors with legal impunity in many states.

Guidelines issued by the World Professional Association for Transgender Health, which now “allow” for “top surgeries” for minors on a case-by-case basis, initially endorsed “top surgeries” for teens 15 and up, but rescinded this decision after backlash from major medical groups.

Some argue that the extremely lucrative nature of “transgender” surgeries tilts the consensus of the medical community, a point highlighted by the recent explosive revelation that Vanderbilt University Medical Center promoted “gender transitions” surgeries, including “top surgeries,” for minors as a “huge money maker.”

Dr. Shayne Sebold Taylor, a physician with VUMC’s Clinic for Transgender Health, noted that “chest reconstruction” can mean $40,000 per patient.

The New York Times noted that “top surgery” itself costs “anywhere from $9,000 to $17,000, depending on facility and anesthesia fees,” and that the procedure “is often not covered by insurance until patients turn 18.”

Jarrett Stepman, writing for The Daily Signal, highlighted the double standard that leftists hold regarding the mutilation of “transgender” surgeries, and the lack of evidence that such operations have any beneficial impact on mental health.

Studies are being published in support of procedures like top surgeries that are rife with problems. For example, Dr. Johanna Olson-Kennedy, the medical director of Children’s Hospital Los Angeles, claims that she has had a “zero percent” regret rate for chest surgery, and is the lead author of a study that claims teens that “had not undergone the procedure reported significantly more distress because of their chests,” the NYT shared.

But, as the Times noted, “Most patients were surveyed less than two years after their surgeries, and nearly 30 percent could not be contacted or declined to participate.”

Moreover, at least one de-transitioner has shared that she did not inform her initial surgeon about her decision to reverse course.

Questioning why short-term distress over one’s physical appearance is being used as the be-all end-all criterion for a permanently life-altering decision, Stepman asked: “How many more children will be sacrificed on the altar of this new public religion?”