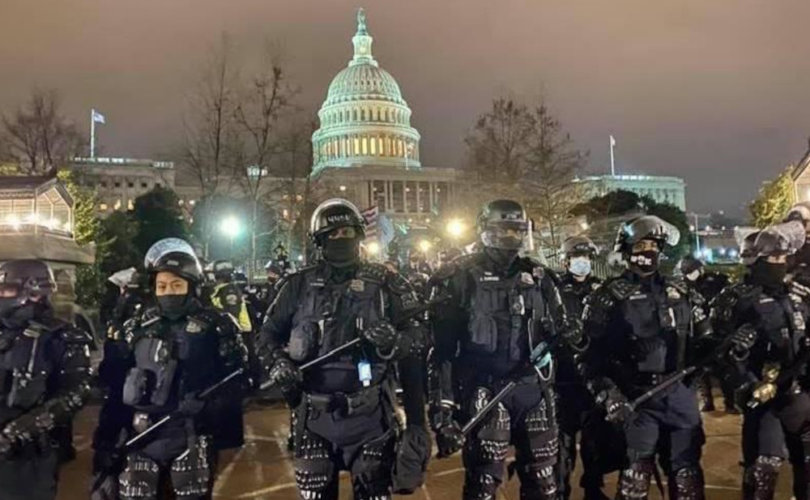 On that date last year, protesters broke into the U.S. Capitol building after former President Donald Trump’s “March to Save America” rally, which was meant to encourage Republican lawmakers to delay the certification of electoral votes from a handful of states over concerns about vote fraud in the 2020 presidential election.

Viral videos showed people engaging in physical altercations with police, pushing against security barricades, breaking through windows, trespassing in congressional offices, and climbing on walls, causing the vote certification to be suspended and lawmakers to be evacuated from the chambers. Other videos, however, showed that many were let into the Capitol by police and simply walked the halls after the initial breach. Several people died, but the only victim of direct, intentional violence was a Trump supporter.

Trump’s political opponents blamed him for “inciting” the riot, leading to an unsuccessful impeachment attempt. Yet despite the FBI failing to find evidence that the violence was planned or organized, Democrat committee investigations into the event have continued ever since, with more than 700 people arrested and many conservatives expressing concerns about their treatment and disproportionate, selective punishment.

On last month’s one-year anniversary of the riot, Rosenberg co-authored an article with Jim Rutenberg and Michael Grynbaum purporting to debunk “The Next Big Lies: Jan. 6 Was No Big Deal, or a Left-Wing Plot.”

“The reimagining of Jan. 6 has not so much evolved as it has splintered into rival, but often complementary, false narratives with a common goal — to shift blame away from Mr. Trump, his supporters and a Republican Party maneuvering to win back control of government,” the authors write. “The riot was a ‘false flag’ operation by Antifa, the loose left-wing collective; the F.B.I. planted agents to stir up the crowd; the protesters were mere “tourists” wrongfully accused by a Democratic-led Justice Department and vilified by a biased mainstream media; police officers recounting their injuries and trauma were ‘crisis actors.’”

On March 8, however, Project Veritas published video of Rosenberg sounding remarkably similar to those he and his colleagues were denouncing.

“It’s not a big deal as they [media] are making it, because they were making too big a deal,” Rosenberg can be seen telling an undercover Veritas journalist in a conversation the group’s founder James O’Keefe says occurred “around the same time” as the writing of the aforementioned “Big Lies” article. “They were making this an organized thing that it wasn’t.”

Rosenberg also declares that “there were a ton of FBI informants amongst the people who attacked the Capitol,” going so far as to claim that Times reporting deserves more credit than conservative media for bringing their involvement to light.

Elsewhere in the conversation, Rosenberg mocks some of his own younger colleagues for declaring themselves traumatized by the events of January 6.

“These f***ing little dweebs who keep going on about their trauma. Shut the f*** up. They’re f***ing b****es,” Rosenberg says, in a stark contrast to his own experience: “Me and two other colleagues who were there outside and we were just having fun.”

On March 9, Veritas released a follow-up video in which O’Keefe confronts Rosenberg for comment on the story:

Before O’Keefe reads most of the comments back to him, Rosenberg says “I’m not gonna give you a comment,” suggests the Veritas piece will be “worse than a hit job,” and declares, “Will I stand by those comments? Absolutely.”

Rosenberg goes on to say “no way” to the prospect of a formal on-the-record interview with O’Keefe, and attempts to downplay his comments in the undercover video. “Sir, you’ve got me at a bar in a social situation. This is me talking shit at a bar. If you think that’s news, it is what it is.”

Project Veritas intercut that defense with another clip of Rosenberg calling it “fair game” for a reporter to cover things overheard from “talking in public.”