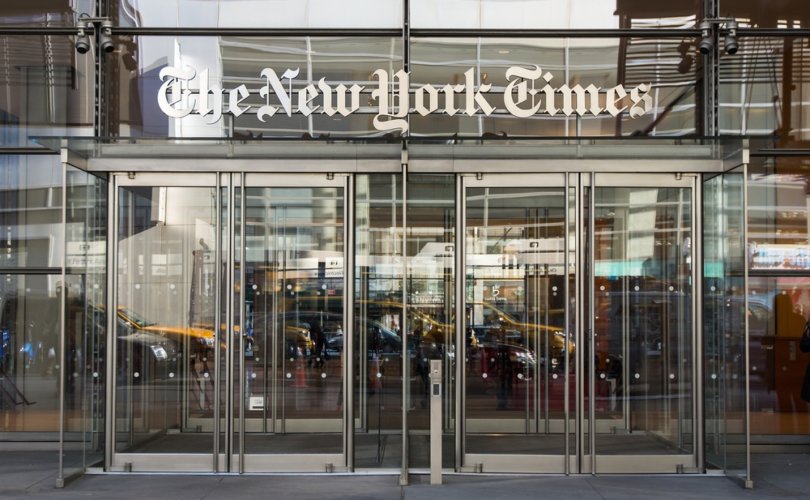 NEW YORK (LifeSiteNews) — An opinion piece published last week by the heavily left-leaning New York Times’ editorial board cautiously affirmed the right of Canadian truckers to rally against COVID mandates in the ongoing demonstrations that have gained international attention.

While the newspaper’s editors stated they “disagree with the protesters’ cause,” they acknowledged that the Freedom Convoy has “a right to be noisy and even disruptive.”

Protests are a necessary form of expression in a democratic society and, by the standards of mass protests around the world, the “Freedom Convoy” snarling downtown Ottawa ranks as a nuisance: @nytimes editorial https://t.co/Kg1MaQrFYU #COVID19 #cdnpoli

Published February 10, The New York Times op-ed weighed in on the now-famous Canadian trucker convoy, which has brought Ottawa to a standstill and had temporarily shut down a major trade route between the United States and Canada to protest ongoing COVID-19 jab mandates, lockdowns, and other restrictions.

According to the writers, the movement is a “test of democracy.”

The editors began the column by downplaying the size and impact of the convoy, which has attracted tens of thousands or even hundreds of thousands of participants and supporters, generated millions of dollars in donations from backers, and sparked copycat protests around the world.

According to The Times editorial board, however, “[b]y the standards of mass protests around the world” the truckers’ demonstration merely “ranks as a nuisance,” and “most Canadians support neither the truckers nor their cause.”

Regardless of attempts to dismiss the protest as insignificant, however, the authors went on to acknowledge that “[i]n an increasingly polarized political environment, the Canadian truckers” have become “an instant cause célèbre.”

Further, the editors suggested that “what’s happening in Canada deserves close attention in the United States and across the world.”

The left-wing newspaper, which gave ample supportive coverage to disruptive and often violent Black Lives Matter protests in the summer of 2020, observed that the truckers, too, have the right to protest.

“We disagree with the protesters’ cause, but they have a right to be noisy and even disruptive,” the authors stated, arguing that “[p]rotests are a necessary form of expression in a democratic society, particularly for those whose opinions do not command broad popular support.”

Contrary to the claims of The Times, however, available statistics indicate the truckers do actually command broad popular support, even spanning national borders. What they lack is support from government officials who have sought to shut the protests down.

The Canadian truckers’ convoy has been met with a steady barrage of criticism, harsh rhetoric, and threats from officials who have accused the diverse and markedly peaceful protesters of being “terrorists” and “white supremacists,” who they characterize as engaging in an “occupation” and threatening the livelihoods of Canadians.

On Monday, without agreeing to meet with any participants in the convoy or consider the causes for which the truckers have rallied, Canadian Prime Minister Justin Trudeau invoked the Emergencies Act, authorizing police to undertake a range of measures to disperse protesters and even permitting banks to freeze the accounts of people suspected of engaging in or supporting the protest.

Conservatives have blasted Trudeau for invoking the Act, accusing him of blatant “tyranny” and attempting to create a “dictatorship” in Canada.

In its column, published before Trudeau’s arguably drastic move, The New York Times reflected the attitudes of many conservatives with regard to the trucker convoy, arguing that “[e]ntertaining the use of force to disperse or contain legal protests is wrong.”

“Governments have a responsibility to prevent violence by protesters, but they must be willing to accept some degree of disruption by those seeking to be heard,” the column argued.

For comparison, The Times pointed to Trudeau’s 2020 comments supporting farmers in India who blocked major highways as part of a yearlong protest.

“Canada will always be there to defend the right of peaceful protest,” Trudeau had said.

While The Times op-ed had begun by asserting that the truckers had a limited following and did not enjoy substantial support, the authors later affirmed in its wrap-up that “[t]he convoy has captured an underlying frustration in a broad swath of the Canadian public.”

The Freedom Convoy truckers and their supporters have touched a nerve among fellow Canadians and citizens throughout the world who have seen their basic freedoms and rights kneecapped under the auspices of COVID-19 mitigation strategies enacted worldwide.

Protesters participating in the convoy have called for a return to pre-pandemic normalcy, asking the government to lift COVID-19 jab mandates that force employees to get an experimental shot or lose their livelihoods, put an end to discriminatory rules segregating the unvaccinated from society, and end the ongoing states of emergency declared in response to the virus.

The truckers have also called for assistance to be given to those whose private businesses were arbitrarily shuttered by government edict, and return jobs to those who lost them due to COVID measures.

According to The New York Times, Canada’s Freedom Convoy has generated “wide appeal” by “turning coronavirus restrictions into a rallying cry for the disaffected.”

The editorial concluded by noting that leaders like U.S. President Joe Biden and Canadian Prime Minister Trudeau should navigate the protests cautiously, honoring the right to air grievances in a free country.

“Allowing nonviolent, even if disruptive, protest is an important tool for maintaining social cohesion in a polarized society,” the editors said.