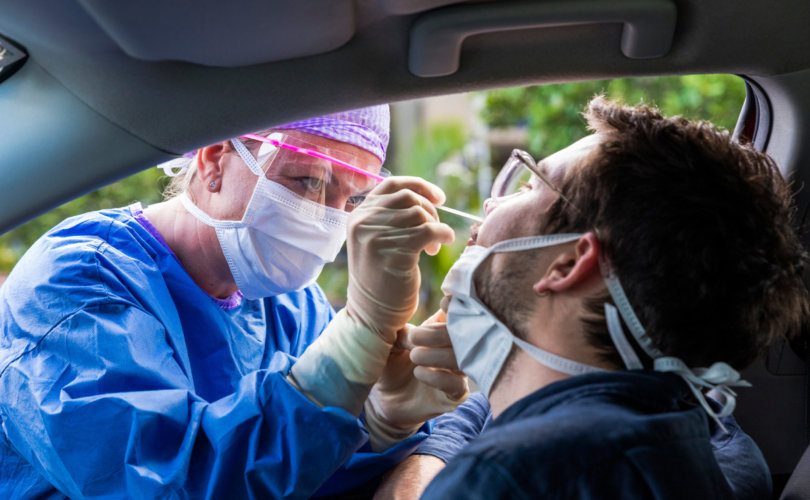 NEW YORK, September 11, 2020 (LifeSiteNews) – In a finding that could have an enormous impact on lockdowns, social distancing, and mask wearing, The New York Times reported that “up to 90 percent of people testing positive (for COVID-19) carried barely any virus,” and thus are “not likely to be contagious.”

“The standard tests are diagnosing huge numbers of people who may be carrying relatively insignificant amounts of the virus,” the newspaper wrote on August 29.

The commonly used PCR tests, the article explained, amplify “genetic matter from the virus in cycles; the fewer cycles required, the greater the amount of virus, or viral load, in the sample. The greater the viral load, the more likely the patient is to be contagious.”

However, doctors aren’t told about the number of cycles needed to identify the viral load. One patient could be highly contagious, whereas another is not likely to spread the virus at all – the doctor doesn’t know and is unable to act accordingly.

If “up to 90 percent” of coronavirus cases are not actually contagious, the measures implemented by governors across the United States are called into question.

Governors generally look at the number of new cases to determine their course of action in easing or reinforcing lockdowns. The state of California, for instance, considers less than four daily cases per 100,000 people in any given county to be “moderate” risk level. Four to seven cases are categorized as “substantial,” and the risk level is deemed “widespread” as soon as more than seven people get a positive test result on any given day.

At a “widespread” risk level, many non-essential indoor business operations are closed, the official website explained. Most of the state is categorized at that level, and indoor church services, among other things, are officially prohibited.

Not only are the thresholds for California risk levels incredibly low, they also don’t take into account that a large number of positive tests could flag people who are not likely to be contagious, as The New York Times pointed out.

The large number of positive tests increased fear in the population. However, beyond The New York Times’ findings, the Centers for Disease Control and Prevention found that in 94 percent of cases of death linked to COVID-19, other “health conditions and contributing causes” were present, as well.

With that in mind, protests against mask mandates, mandatory vaccines, church closures, and business lockdowns appear to be very reasonable acts.

“I work in rural America and I’ve seen three cases in eight months,” Dr. Leland Stillman told LifeSiteNews at the “March Against Mandates” in Virginia earlier this month. “And one of them was a false positive. You’re going to tell me everybody ought to be vaccinated over a virus that seems to be harming a very, very small proportion of Americans, most of whom were already extremely old or malnourished or extremely sick? That doesn’t hold water.”