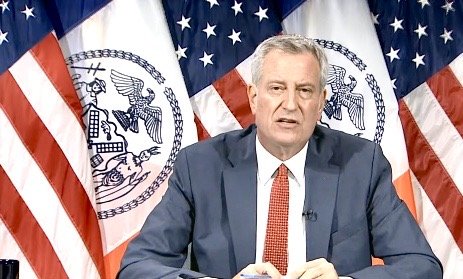 NEW YORK CITY, July 30, 2021 (LifeSiteNews) – New York City’s Democrat Mayor Bill de Blasio announced Monday that all municipal employees of New York City will be required to have received one of the experimental COVID-19 vaccines, or be forced to take a mandatory test for the virus every week, starting September 13.

The announcement followed an earlier edict last week that forces public healthcare employees into a vaccine-or-test program effective August 2. “We’re in a new era of COVID where there’ve been millions of people vaccinated and hospitalizations rates have gone down, but cases are rising and we need to make sure our health care facilities are as safe as possible,” a spokesman for the administration said at the time.

The extension of this program to all city employees means roughly 340,000 people, including teachers and police officers, will also be required to take the shot or face weekly COVID testing. “It means people who work in offices and people who work on the front line. Everyone,” de Blasio explained, adding that city workers will be required, from August 2, to wear face masks indoors at all times if they have not taken the jab.

The mayor also threatened to have employees dismissed without pay for violating the order. “If employees refuse to comply (with the mask mandate), they just can't be at work – and in fact they will not be paid,” Labor Relations Commissioner Renee Campion confirmed.

August 2 will also see the introduction of the NYC COVID-safe cell phone app, which will run alongside the state-wide Exclesior Pass, giving smartphone users a digital means of uploading their vaccine and COVID-test status, linked to a government-issue photographic identity. The NYC Department of Information Technology and Telecommunications, which developed the app, noted that data regarding users’ “health and fitness, user content, usage data, contact info, identifiers, sensitive info” could be collected, but “is not linked to your identity.”

The mayor also announced a push from the New York City government to put pressure on social media giants Facebook, Twitter, and Instagram to remove the accounts of 12 individuals identified as the “disinformation dozen” by the Center for Countering Digital Hate (CCDH). These 12 people, including Robert F. Kennedy, Jr., were calculated by the CCDH as being responsible for the most “disinformation” regarding COVID-19 and the related “vaccines.”

Later, in a Tuesday interview on MSNBC’s Morning Joe, de Blasio doubled down on his plan to increase the pressure on workers to take the jab and hinted towards extending his mandate even further to include all citizens of New York City.

“I want to emphasize that that either/or [vaccine or tests] really creates a positive pressure for vaccination, because it will be the responsibility of the employee to get tested on a regular basis.” De Blasio observed. “That's going to say to people, just get vaccinated, get it done, be safe, help your colleagues be safe. Don't have to go through the hassle of weekly testing.”

The mayor described his intention to explore “every form of mandate” to push vaccine uptake amid a decline in numbers. “I think we're all climbing a ladder here very rapidly,” de Blasio said in reference to increasingly intense coercion to take the experimental shots. “I've said to the private sector in New York City, any private sector entity, go ahead and do a full mandate, if that's something you feel you can do and works for you do it now.”

De Blasio went so far as to dub anyone who refuses to take the jab an “anti-vaxxer” who he said “are criminal at this point.”

“What they are doing to this country is undermining our future. They really are. They're taking away the future of this country,” he blasted.

Taking no prisoners, the New York mayor exclaimed “we've got to shake people at this point and say, ‘Come on now. We tried voluntary.’ You know, we could not have been more kind and compassionate as a country. Free testing, everywhere you turn, incentives. Friendly, warm embrace.”

However, he now claims that “the voluntary phase is over. We can keep doing those things. I'm not saying shut it down. I'm saying voluntary alone doesn't work. It's time for mandates because it's the only way to protect our people.”

As a parent himself, de Blasio claimed that, were his children to be attending school in the upcoming autumn semester, “I would be running to get them vaccinated right now,” adding that the idea of vaccinating is not new, since “we used to do this as parents all the time for a variety of vaccinations.”

On the contrary, a group of eminent European scientists have this month released a statement in which they contend that “vaccination of adolescents for COVID-19 is unnecessary, claims demonstrating efficacy are misleading, and the safety profiles are catastrophic.”

The apparent need for vaccinating adolescents against COVID-19, the scientists argue, is not founded in reality, since “the infection fatality rate of COVID-19 is on the order of 0.15% to 0.2% across all age groups, with a very strong bias towards old people.” In addition, the scientists noted that “as of April 2020, those younger than 18 years accounted for just 1.7% of all COVID19 cases” within the U.S., with “no severe cases of COVID-19” being observed “in those above 10 but below 18 years of age.”

Despite this, De Blasio stated his clear intention that the “ideal here is get everyone vaccinated, and it's necessary.” After stating that “sometimes the voluntary approach works” in achieving his goal, he asserted that this was only true “in the first months” of the coronavirus crisis.

Instead of simply offering incentives, such as $100 to anyone who gets their first shot at a city-run vaccination station, “we think now saying ‘You got to get vaccinated, if you don't, then you're responsible for testing every single week,’ which is a lot of responsibility, is going to move a lot of people to vaccination. It's just going to be the moment they say, ‘Okay, to hell with it, I'm going to do it.’”

“But if that's not enough,” he warned, “I think we got to be ready to climb the ladder more.”