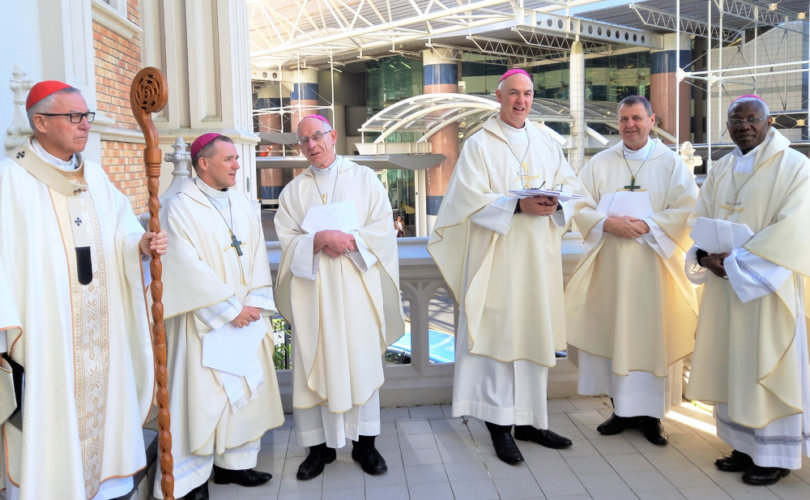 (LifeSiteNews) – New Zealand’s bishops have urged priests to ensure the “accompaniment” of those seeking to end their lives through assisted suicide, stating that it is a “sign of good intent” when such patients seek “spiritual accompaniment.”

The document “Ministers of Consolation and Hope,” written by the New Zealand Catholic Bishops Conference (NZC), presents guidelines for clergy “to accompany those contemplating euthanasia or assisted dying.”

An additional document, the pastoral statement “Bearers of Consolation and Hope,” was issued in conjunction with the guidelines, and expressed the hope that the NZCBC guidelines would “transform the places of assisted dying into outposts of the Holy Spirit.”

Released October 28, the documents were written in light of the End of Life Choice Act which takes effect November 7, after having passed Parliament and a public vote. The act provides for euthanasia and assisted suicide to anyone over the age of 18 who has been diagnosed with a terminal illness and who is likely to die within six months.

Some suggest the two documents are in direct violation of the clear pronouncements from the Congregation for the Doctrine of the Faith (CDF) which forbid priests from acting in “accompaniment” in the manner proposed by the NZCBC.

Ministers of Consolation must respond to ‘sign of good intent’

While vaguely referencing the “Church’s clear teaching about euthanasia,” the NZCBC urged “accompaniment” on the part of priests, saying: “Accompanying someone who is expressing a desire for assisted dying does not imply moral agreement by the accompanier.”

“Rather, accompaniment ensures that no one is abandoned to desolation (cf. Spe Salvi, 38). It calls pastoral carers to enter into a liminal space where the Church’s beliefs about euthanasia sit alongside its teaching about accompaniment and consolation,” the letter stated.

In fact, referring to a 2020 letter from the Vatican, the NZCBC lent some praise to those seeking assisted suicide who also sought “spiritual accompaniment,” saying that such a desire “for a compassionate companion is already a sign of good intent.”

“The Church’s sacraments — encounters with God — are provided to the person who requests them,” declared the bishops. “In accordance with pastoral practice in other areas, the sacraments should only ever be declined in those very rare cases when someone seeks them in bad faith. All ministers are entitled to presume that a person asking for the sacraments does so in good faith.”

Priests ordered to provide replacement if they cannot accompany euthanasia

While writing that no “priest, chaplain, pastoral worker, healthcare professional or caregiver should ever feel obliged to do or say something that goes against their own conscience,” as any “cooperation in the act of facilitating or administering an assisted death must be excluded in all cases,” the NZCBC nevertheless appeared to soon contradict such a preservation of conscience rights on the part of the priest.

“If an individual priest, chaplain, pastoral worker, healthcare professional or caregiver decides that there is a limit to their ability to accompany a person seeking assisted dying, such a decision should be fully respected. At the same time, they should ensure that provision is made for the person to be accompanied by another,” the statement continued.

Such statements were described by Catholic author and liturgist Matthew Hazell as “contradictory.”

Yet Bishop Stephen Lowe, the vice president of the NZCBC, declared, “We do not need to deny the objective wrong of euthanasia in order to accompany, with consolation and hope, those who might feel drawn or pushed towards this type of death.”

The guidelines ended with an appeal to Our Lady of Sorrows, asking that she “accompany all those who humbly and generously remain alongside the dying through the last stages of their earthly life.”

What does the CDF’s document say?

While the NZCBC drew from the CDF’s 2020 letter when commenting on the “good intent” of those seeking euthanasia and that the sacrament should be given to those who ask for them, Hazell questioned whether the bishops had actually read the document.

For in Samaritanus Bonus, the CDF taught that Confession and the Last Rites can only be granted to a person, “when the minister discerns his or her readiness to take concrete steps that indicate he or she has modified their decision in this regard [of seeking euthanasia]. Thus a person who may be registered in an association to receive euthanasia or assisted suicide must manifest the intention of cancelling such a registration before receiving the sacraments.”

Continuing, the CDF stipulated that “those who spiritually assist these persons should avoid any gesture, such as remaining until the euthanasia is performed, that could be interpreted as approval of this action. Such a presence could imply complicity in this act. This principle applies in a particular way, but is not limited to, chaplains in the healthcare systems where euthanasia is practiced, for they must not give scandal by behaving in a manner that makes them complicit in the termination of human life.”

In its 1980 document on euthanasia, the CDF clearly stated that “nothing and no one can in any way permit the killing of an innocent human being” of any age, nor is anyone “permitted to ask for this act of killing, either for himself or herself or for another person entrusted to his or her care, nor can he or she consent to it, either explicitly or implicitly, nor can any authority legitimately recommend or permit such an action.”

Such a clear condemnation of euthanasia is based on its being a “violation of the divine law, an offense against the dignity of the human person, a crime against life, and an attack on humanity,” wrote the CDF. Pope John Paul II in Evangelium Vitae §65 echoed that position: “I confirm that euthanasia is a grave violation of the law of God, since it is the deliberate and morally unacceptable killing of a human person.”

‘With shepherds like these the Church doesn’t need persecutors’

Hazell noted that the NZCBC’s two documents were the result of “buzzword theology”: “We see all the currently fashionable buzzwords in the NZ Bishops’ document — ‘accompaniment’, ‘liminal space’, ‘encounter’, etc. — but we can also see in this document the results of pastoral care via buzzword theology, and it’s not pretty. Pray for New Zealand.”