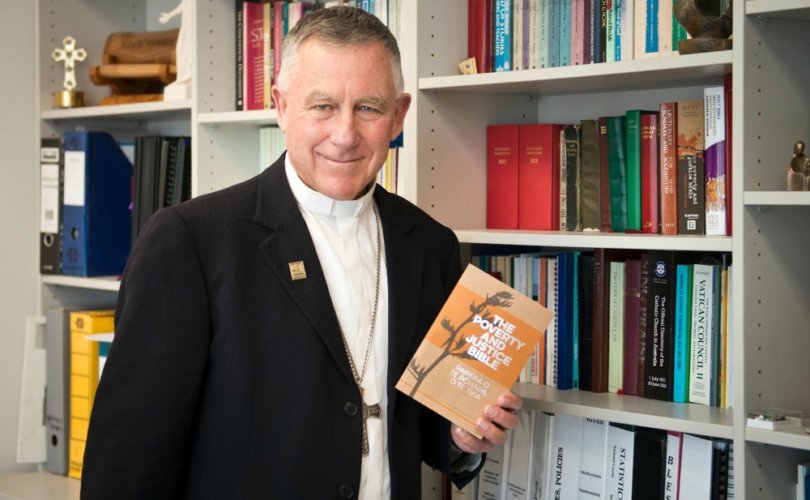 November 13, 2017 (LifeSiteNews) — The cardinal archbishop of Wellington, New Zealand, ordered a change in the Mass recently that is “completely contrary” to the governing document for all celebrations of the Catholic Mass in the Ordinary Form, a “creative initiative” the cardinal said was inspired by Pope Francis.

Cardinal John Dew called for churches to divert from liturgical protocol of the Gospel reading conducted by ordained clergy with a Lectio Divina reading of the day’s Gospel performed by a layperson.

Lectio Divina — Latin for divine reading — is an ancient Benedictine practice of prayer involving reading and reflection of Scripture, followed by prayer and contemplation. It’s generally done individually, but can be done in a group, and it is not included in the Mass rubrics.

Cardinal Dew said, “This Lectio Divina initiative is a way the Archdiocese is responding to the plea of Pope Francis to make the sacred Scriptures better known and more widely diffused.”

“He has reminded us that we can take creative initiatives in our parishes so that we can become ‘living vessels for the transmission of God’s word,’” the cardinal said. “Lectio Divina is a wonderful way for us to become these living vessels.”

Instead of two readings and a responsorial psalm before the Gospel at Sunday Mass on October 29, there was to be only one reading (the Gospel), CathNews New Zealand reported, read by a lay reader.

“The lay reader – called the Lectio Divina Leader – will also guide the congregation through the Lectio Divina process,” said Cardinal Dew, “which involves both listening to and reflecting on the Gospel. The process is something all of us can do at home.”

“What will happen is the reader will invite the congregation to close their eyes and listen prayerfully while the Gospel is being read,” he said. “While they are listening, each person will be listening for a word, image or phrase that strikes them in some way.”

This was to be followed by a 30-second period of silence.

The lay leader was to then re-read the Gospel and invite the congregation again to listen for this word, image or phrase.

The process was to continue, with the lay leader directing Catholics in the pews to reflect on the scripture and rest alternately with short periods of silence.

“The Leader will end the Lectio Divina process with a short prayer of thanksgiving,” said Cardinal Dew.

Liturgy experts reacted to this handling of the Gospel reading during Mass, saying it contradicted established norms for the Mass.

“What this bishop has ordered is completely contrary to the General Instruction of the Roman Missal, the governing document for all celebrations of the Mass in the Ordinary Form of the Roman Rite,” said Dr. Peter Kwasniewski, a well-known liturgical theologian and commentator.

“What he is proposing to do violates two separate rules,” Kwasniewski said, “one, that all the readings specified for the day should be read, and not merely one reading — the Gospel; second, that the Gospel should always be proclaimed by an ordained man — be it bishop, priest, or deacon.”

Dr. Joseph Shaw, Oxford University Philosophy professor and research fellow, and chairman of the Latin Mass Society of England and Wales, also confirmed for LifeSiteNews that the Gospel reading at Mass is to be read by ordained clergy.

“The General Instruction of the Roman Missal, section 59, makes it clear that only a priest may read the Gospel at Mass,” Shaw told LifeSiteNews. “The reading of the non-Gospel readings as well as the Gospel is also part of the rubrics of Mass, which I believe can only be suspended by the Holy See, not a local Ordinary.”

He affirmed as well the Lectio Divina process called for by the cardinal is not appropriate for Mass.

“What is described, though it does not correspond with the ‘lectio divina’ described by the spiritual masters of the past, may be beneficial to some people in the context, as the Cardinal notes,” Shaw said, “of private devotion at home.”

“However it is very different from a liturgical reading of Scripture,” he continued, “which is offered to God as part of a single act of worship with the rest of Mass.”

“This is indicated by the honor given to the Gospel, being incensed before being read and kissed afterwards,” said Shaw. “These ceremonies underline why it is appropriate for a priest or deacon to read the Gospel.”

Shaw said section 60 of the General Instruction also adds regarding the Gospel:

“The Liturgy itself teaches that great reverence is to be shown to it by setting it off from the other readings with special marks of honor: whether on the part of the minister appointed to proclaim it, who prepares himself by a blessing or prayer; or on the part of the faithful, who stand as they listen to it being read and through their acclamations acknowledge and confess Christ present and speaking to them; or by the very marks of reverence that are given to the Book of the Gospels.”

Kwasniewski pointed out that number 357 in the GIRM states: “Sundays and Solemnities have assigned to them three readings, that is, from a Prophet, an Apostle, and a Gospel, by which the Christian people are instructed in the continuity of the work of salvation according to God’s wonderful design. These readings should be followed strictly.”

He further cited sections 61-66 of Redemptionis Sacramentum, issued in 2004 by the Congregation for Divine Worship and the Discipline of the Sacraments to address liturgical abuses, all underscoring specifically that reading the Gospel at Mass is reserved to an ordained minister.

However, the cardinal has made statements conflicting with Church principle on worthiness to receive Communion.

He has spoken favorably of the pope’s contentious exhortation Amoris Laetitia a number of times, and had supported admission to Holy Communion for divorced and civilly remarried Catholics long before to the two Synods on the Family.

Regarding his intervention at the 2014 Extraordinary Synod on the Family, he’d said, “I basically said that we have to change the language which is used in various Church documents so that people do not see and hear the Church judging or condemning, passing out rules and laws, but rather showing concern and compassion and reaching out to help people discover God in their lives.”

“No one in the Church has the authority to violate the rubrics in this manner,” Kwasniewski told LifeSiteNews regarding Dew’s Lectio Divina initiative. “However, given that the Pope himself set such a bad example by first violating the rubrics about the washing of men's feet on Holy Thursday, then by changing the rubric and violating it again by washing the feet of non-Christians, it is hardly surprising that we see such flagrant abuse.”

He noted that Novus Ordo liturgy in most places is marked by constant abuses of one kind or another, so this is not a new phenomenon for Catholics.

“Yet it is particularly disturbing when it comes from high-ranking churchmen who ought to know better, given that their example is far more obvious and likely to be imitated,” Kwasniewski said. “This bishop deserves to be soundly disciplined for this action, and his faithful should protest to him and to the Vatican.”