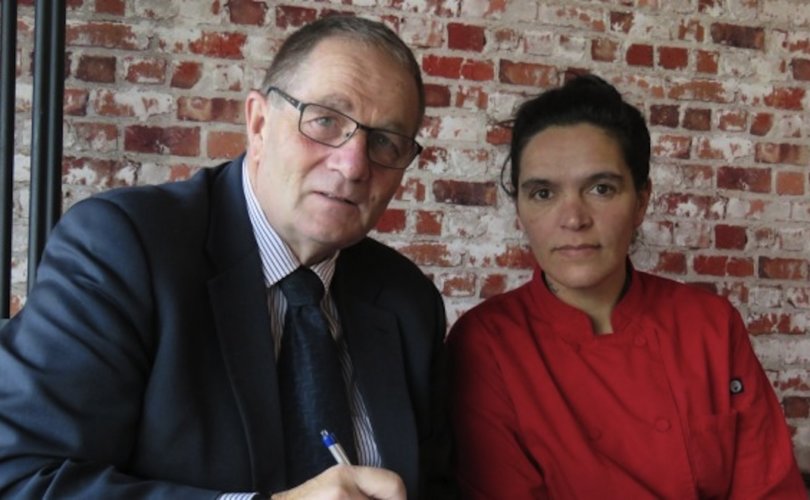 Hillary Kieft (right) and Chester Borrows, a member of the New Zealand Parliament

WELLINGTON, New Zealand, July 11, 2016 (LifeSiteNews) — New Zealand parliamentarians decided that parents do not have a right to know if their daughter under age 16 is pregnant and seeking an abortion.

Parliamentarians cited various reasons, including the government’s contention that only a small number of girls in this situation decide not to tell their parents.

In 2015, a petition by Hillary Kieft and six others was presented to parliament asking that the law be changed.  Kieft decided to take action after finding out her 15-year-old daughter had been taken during school hours for an abortion without her knowledge or consent.

The abortion was only revealed to the family when her daughter attempted suicide after a year of depression, self-hatred, anger, alcohol, and substance abuse.

A report released last week by the Justice and Electoral Committee in response to the petition concluded that parents do not have an automatic right to know if their child is seeking an abortion.

The Committee noted that “young people should be encouraged and supported to tell their family, but in some situations this would put them at risk of harm.”

“We think that mandatory, unconditional parental notification could result in some young people being forced into making a decision against their own wishes,” they continued.

The report also stated that “only about 60 abortion procedures per year are performed on young people under 16 years old, and of those, less than 10 exercise their legal right not to tell their parents or caregivers about the pregnancy or abortion.”

However, Bob McCoskrie, national director of Family First, an organization that works to protect families, argued that the Justice and Electoral Committee have their numbers wrong. “Either [they] misled the public or have been given the wrong advice on the rates of secret teen abortions,” he said.

Statistics obtained from the Abortion Supervisory Committee, which oversees the implementation of the abortion law in New Zealand, paint a different picture.

He also questioned the Committee’s declaration that approximately 10 girls per year don’t tell their parents about their abortion.

“This data is simply not collected,” McCoskrie said. “An additional Official Information Act [request] reveals that statements made by ASC Chairperson, Dame Linda Holloway, to the Select Committee have no objective or verifiable standing and are based purely on anecdotal evidence.”

According to the Abortion Supervisory Committee, the information was obtained verbally via telephone conferences and meetings with abortion providers in major centres.

Yet, in an interview in May 2015, Family Planning Chief Executive Jackie Edmond cited a study suggesting 25 percent of New Zealand schoolgirls who have had an abortion don’t tell their parents. “Based on this, that means that at least 700 girls under 16 years old haven’t told their parents about their abortion in the past 10 years,” McCoskrie pointed out.

In New Zealand, a girl under the age of 16 can consent to an abortion without telling her parents or caregivers she is pregnant. However, permission is required for field trips, dental treatment and even Panadol.

Ironically, Wellington’s District Health Board, Capital & Coast, requires permission from an adult if a minor under 16 who has had an abortion wishes to take the “pregnancy tissue/fetus” home.

Treatment of any complication arising from the abortion also requires parental or caregiver consent.

In 2010, an independent poll found that four out of five people (79 percent) in New Zealand supported parental notification laws.

Kieft, who had hoped for a more positive outcome in favor of families, is disappointed.

“As parents, we have given politicians the right to make laws and yet we don’t have a right to care for and protect our girls,” she said. “We are left to pick up the pieces, and in some cases we are the ones having to bury our children – that was almost the case for my family.

“I will continue to fight for this issue. I don’t want to see any other family go through what we have as a family.”