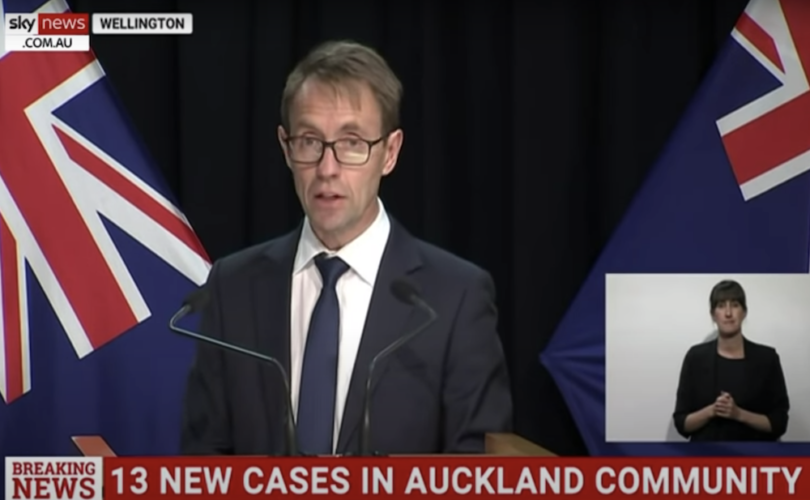 UPDATE, August 14, 2020: This story has been updated to provide additional details on New Zealand’s quarantine rules, and to make a correction – lawmakers’ March vote to decriminalize abortion was unrelated to the previous referendum on the issue, which failed.

AUCKLAND, New Zealand, August 13, 2020 (LifeSiteNews) – The government of New Zealand has announced that all COVID-19 infected citizens, and possibly close relatives with them, will be taken and placed in mandatory “quarantine facilities.”

The move “shows how serious we are about limiting any risk of ongoing transmission – even in self-isolation and including to others in the household,” Director-General of Health Dr. Ashley Bloomfield claimed at a press conference Thursday, NewsHub reports. “It will help us avoid any further inadvertent spread into the community as part of our overall response.”

Previously the government had required people who contracted the coronavirus to self-isolate in their own homes, with only travelers entering the country having to isolate in “managed isolation” (if asymptomatic) or quarantine facilities (if they show symptoms). But officials are now going further in response to four members of one family in South Auckland being diagnosed with the virus, breaking the country’s 102-day streak of no new community transmissions.

Bloomberg adds that the government reported a total of 13 new cases Thursday, bringing the national total to 36 current active cases. 19 of those cases came from people who tested positive after returning from overseas travel.

“A reminder, these facilities have been set up specifically and have excellent processes and resources in place to look after people with COVID-19, including health staff on site at all times,” Bloomfield claimed.

The facilities themselves consist of 32 hotels across the country, with Auckland alone having 19. Meals are delivered to residents’ rooms. Regulations for movement outside individual rooms vary from location to location, but require face masks.

Like many other nations, New Zealand’s response to COVID-19 has raised concerns over civil liberties, particularly keeping churches closed while allowing secular entities to reopen. In March, lawmakers also voted to decriminalize abortion.

While many in the press held up New Zealand as a model for success, journalist Jordan Schachtel argues that the truth is anything but.

“Tourism has been indefinitely canceled,” Schachtel writes. “New Zealand cannot even accept visitors from neighboring Australia. Tourism is a massive industry in New Zealand. It accounts for 6 percent of GDP, and 8.4 percent of the country’s workforce, or 230,000 Kiwis, are employed in the tourism industry […] People are getting a lot poorer. The country entered into a recession in June. A new jobs report found that in addition to the 4% of the workforce that cannot find a job, some 346,000 Kiwis are underemployed.”

Meanwhile, he continues, “New Zealand doesn’t appear to have a set end game on how it will deal with the coronavirus. Officials appear to be banking on a widespread vaccine with unprecedented efficacy to keep them sheltered from the virus.”

“When New Zealand opens back up, the virus will still be circulating around the globe, and much of the population will inevitably face risk of infection,” Schachtel laments. “New Zealand has temporarily shielded its 4.8 million citizens from the virus, but at a tremendous cost that is going to set back Kiwis for years.”