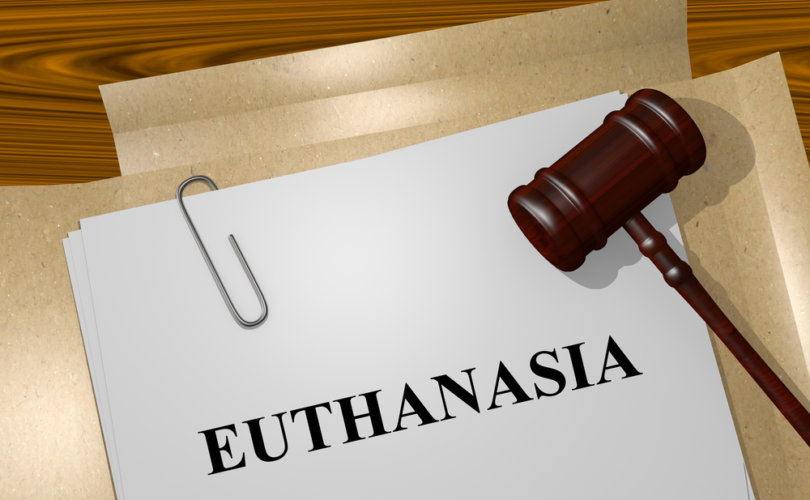 NAPIER, New Zealand (LifeSiteNews) — A New Zealand woman who pleaded guilty to murdering her disabled daughter by strangulation has received a mitigated sentence after the judge deemed the murder a “mercy killing.”

Cherylene Lawrence, a 49-year-old woman from Napier, New Zealand, was sentenced to six and a half years in prison on November 5 at Napier High Court after she pleaded guilty in September to the murder of her terminally ill adult daughter, Chevana Fox.

Fox had been diagnosed with Huntington’s disease when she was just 16 years old, an incurable and neurodegenerative condition which affects the nerve cells, causing a loss of mobility, impaired cognitive function, and mood swings. Those in the late stages of Huntington’s require full-time care.

According to a Stuff report from September, Fox used a wheelchair, could neither read nor write, and struggled to contain her temper, lashing out at her mother and professional carers, and crying often.

Although Fox was helpless and Lawrence admitted to killing her daughter “on purpose,” High Court Judge Cheryl Gwyn said that exceptional circumstances convinced her that Lawrence did not merit the full punishment prescribed for her crime, life imprisonment, claiming that there were “elements of a mercy killing in Chevana’s death.”

The court heard that, as she struggled to cope with the increasing demands of caring for her daughter, Lawrence contacted her mother on January 4 to say, “I’m gonna end up killing Chevana. I’ve had enough.”

On January 31, Lawrence strangled her daughter until she was unconscious, believing her to be dead.

The mother subsequently called the emergency services, telling the dispatcher: “Um, I just flipped out and strangled her. Strangled my daughter. She’s dead … The trouble is, I, I did it on purpose.”

Chevana was taken to hospital where she was taken care of until February 28, when she ultimately succumbed to her injuries.

After acknowledging Fox’s vulnerability, Gwyn determined that the “unimaginable” pain of “watching your daughter deteriorate over the last 13 years of her life” required much sacrifice on Lawrence’s part, arguing that this had mitigated Lawrence’s culpability.

“It’s clear to me your personal circumstances would make life imprisonment manifestly unjust,” the judge said, adding that she “did not consider it [Fox’s murder] particularly cruel in the circumstances,” given that “Chevana’s disease was consuming and overwhelming.”

The judge passed a sentence of just six years and six months, without a minimum period before being offered parole.

The decision came just two days before New Zealand enacted its End of Life Choice Act, a piece of legislation that introduces euthanasia and assisted suicide into law, making New Zealand the world’s seventh country to do so.

The national Parliament voted in favor of the act in 2019 and on October 30, 2020, the overwhelming majority of the New Zealand electorate, 65.2 percent, voted to enshrine the pro-death legislation in a public referendum.

The new law, effective from November 7, enables “people who experience unbearable suffering from a terminal illness the option of legally asking for medical assistance to end their lives,” according to the text of the act, granting access to assisted suicide for anyone over the age of 18 who has a predicted life expectancy of six months or less.

The decision to end one’s own life, according to the stipulations of the law, must be approved by two physicians, one of whom will be chosen by the Ministry of Health.

In the short timeframe since the law was enacted, two formal applications have been submitted for euthanasia, according to a Stuff report.

Before a formal application has been submitted, a person seeking assisted suicide must be “assessed” to establish their “eligibility” for the program. If the person is deemed eligible, they must pick the day they are killed and the place they wish the killing to take place, before confirming if they would prefer to carry out the act themselves, or have a medic do it for them.