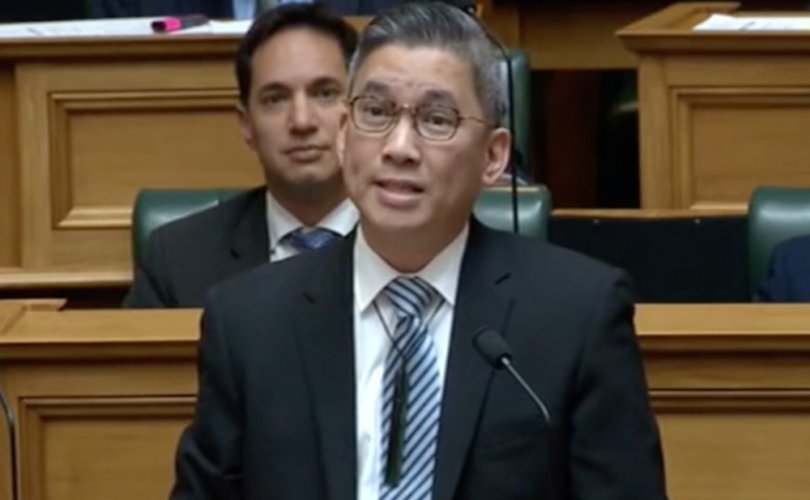 WELLINGTON, New Zealand, June 3, 2019 (LifeSiteNews) – “The pro-life voice must no longer be despised and discounted as offensive. Preachers of tolerance and inclusion must no longer seek to silence and condemn those with opinions that make them uncomfortable but are nevertheless opinions based on another person’s own beliefs and values systems.”

These were the powerful words spoken in New Zealand parliament by Paulo Garcia, the newly installed Member of Parliament in the House of Representatives for the New Zealand National Party.

Mr. Garcia’s gallant maiden speech first gave thanks to “our loving God,” and made no apologies for his faith and pro-life, pro-family views.

“Just as we should be aware of the underbelly of ethnic intolerance in this country, we need to be equally aware of the prejudice of religious intolerance often used as a handy tool in debates,” Garcia warned. “It is insulting for some in this Chamber to suggest that the sole motive to retrograde policies such as euthanasia are religious ones, which is akin to saying that people of faith do not have intellect and shouldn’t also take their place here and contribute to society.”

Garcia’s comments made pointed reference to present political and social debates regarding euthanasia, abortion, and freedom of speech. A report on the End of Life Choice Bill currently before Parliament cites religion as a significant reason why people oppose the legislation. The Justice Committee Report factored in the submissions of almost 40,000 people on the issue.

The remarks also come at a time when the country is still reeling in the aftermath of the violent deaths of 51 people in two Christchurch mosques earlier this year.

Noting the compassion of many in society, most recently seen after the Christchurch shootings, Garcia pointed out that each of us have the “capacity for greed, anger, and hatred.”

A practicing Catholic, he noted some claim his own pro-life and pro-family stances are intolerant.

“There have been people who say my views are intolerant. Why? Because I am pro-life? Because I believe in the sanctity of life?”

Garcia highlighted the nation’s need to support parents, families, and children. He noted, “parenting is the most important job we really have” and praised single mothers for the task they undertake alone.

Calling on the men of New Zealand to do more, he declared, “We as men need to stand strong in our relationships. We must be reliable providers and protectors. We must show tamariki [children] the way to respect and honor women.”

Mr. Garcia, a lawyer, is the first Minister of Parliament of Filipino descent. He replaces former National MP Nuk Korako, who has retired.

Pro-life advocates throughout the country welcomed Mr. Garcia’s courageous maiden speech. His voice joins a growing number of vocal Ministers such as Simon O’Connor and Maggie Barry, who have spearheaded opposition to the End of Life Choice Bill currently awaiting its second reading in Parliament.