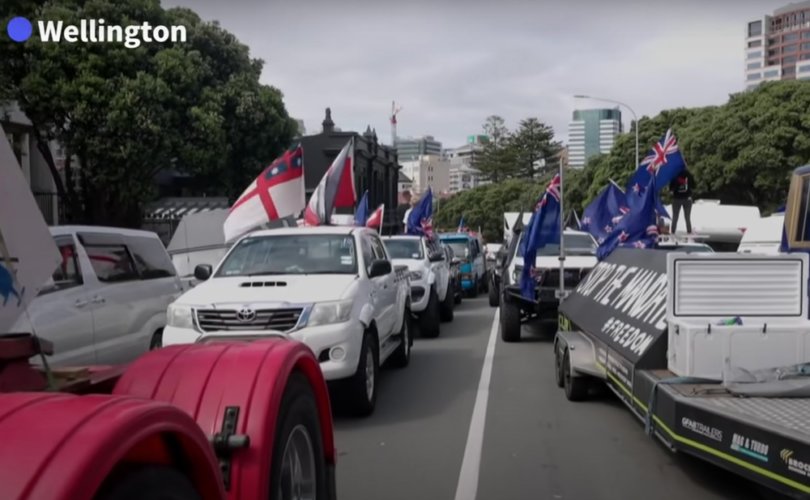 A convoy of trucks and campervans blocked streets near New Zealand's parliament in Wellington Tuesday to protest against Covid restrictions and vaccinationsYouTube Screenshot.

A cavalcade of trucks, cars, and camper vans began at opposite ends of New Zealand’s North Island on Sunday, planning to merge at the approximate middle of the island in the capital city of Wellington. Another convoy took place on the South Island.

Along the way the drivers were met with supporters who gathered on overpasses with signs, banners, and flags.

The North Island’s split convoy converged in Wellington on Tuesday, where vehicles have packed up the streets surrounding the parliament building to demand a reversal of liberty-crushing COVID restrictions. New Zealand’s COVID measures have been among the strictest in the world, and have stripped citizens of their fundamental rights over the past two years.

Participants in the convoy have flown New Zealand flags and displayed signs including “Give us back our freedom” and “Coercion is not consent.” Some have held up Canadian flags in solidarity with the original freedom convoy.

Protestors are estimated to number in the hundreds or thousands.

VIDEO: A convoy of trucks and campervans blocked streets near New Zealand’s parliament in Wellington Tuesday to protest against Covid restrictions and vaccinations, inspired by a similar demonstration in Canada pic.twitter.com/cbcZMI34LL

Like the Canadian truckers, New Zealand’s protestors have emphasized that the demonstration is meant to be peaceful and is not affiliated with any political party.

Similar to Canada’s Justin Trudeau, New Zealand’s Prime Minister Jacinda Ardern has refused to meet with the protesters, arguing that most New Zealanders are in support of her draconian measures which require citizens to show COVID-19 health passes to enter public spaces including restaurants and religious services.

Meanwhile, New Zealand isn’t the only country following Canada’s lead by staging a trucker convoy. Similar convoys have been launched in Australia, the United States, and Europe.

Critics of the diverse, peaceful, and apolitical protests have accused participants of being “far-right,” “extremist,” and even “white supremacist,” while supporters say the convoys symbolize a growing resistance to big government intrusion on personal decisions and fundamental freedoms seen during the unprecedented response to COVID-19.