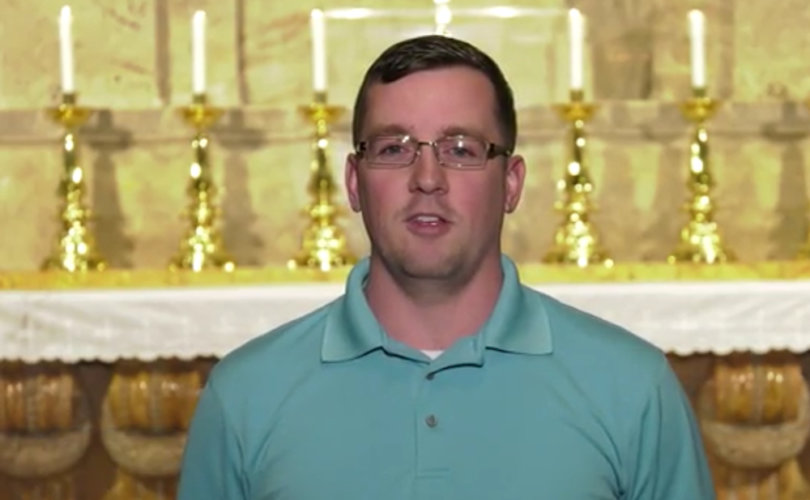 ST. PAUL, Minnesota, January 6, 2017 (LifeSiteNews) – The Cathedral of St. Paul does not fall on the list of places to leave a newborn under the State of Minnesota’s safe haven law, but the Cathedral’s rector said there’s something more significant in the case of a baby boy left there Wednesday night.

Whatever the circumstances or the motivations, Father John Ubel said, “Somebody chose life — and that’s the most important thing.”

The baby boy was wrapped naked in a fleece-tied blanket with his umbilical cord cut and tied with a binder clip and left in a laundry basket in a Cathedral stairwell just after the 5:15 p.m. Mass on Wednesday. His presence has deeply affected Father Ubel, the employee who found him, and many others who’ve come in contact with him since.

Father Ubel described the scene as “very emotional, but also just a beautiful moment, when you think about Christmas and kneeling before the manger.”

“Whomever decided to bring the child here obviously felt that this was a safe place,” the priest said.

Nathan Leonhardt, the Cathedral’s custodian, said he was shocked at first to find the child, but almost immediately his parental instinct kicked in.

Leonhardt was checking doors as usual before locking up after Mass.

When he first saw the green basket after bumping it with a door, he didn’t think much of it. He planned to address it after checking more doors, but something made him go back and look through the few items in the basket.

It was then he heard crying.

“I kind of froze and stood there,” Leonhardt said, wondering if he could be hearing a baby or whether it might be a puppy. After reaching around some more in the basket he saw the baby’s head.

“I didn’t know what to do at the time,” Leonhardt recalled. “I was in shock.”

He said he wrapped the baby up and called Father Ubel, holding the baby in shock until the priest arrived.

Leonhardt said he remained in shock for a while, but even so, he bonded with the baby boy.

Recalling his own four-year-old daughter’s birth, he held the newborn as if he was in a hospital delivery room.

“It felt like it was mine,” Leonhardt stated. “He was my own child.”

Father Ubel called 911 and the men took the child to the church’s sacristy and locked the door until EMS arrived. The wait wasn’t long.

“They did what they had to do, and that was it, the baby was gone,” Leonhardt said. “And I miss him already.”

Officers from the Western District of the St. Paul Police Department responded to the Cathedral on Wednesday night and made this post on Facebook:

“West District Officers were sent on a call last night which touched our hearts. A newborn baby was found in a church.

These are the words from the intake nurse: “I don't often cry tears of happiness at work these days. I am completely speechless by the selfless actions of you and your officers tonight. Your kindness to our little baby speaks volumes for the wonderful men that you are. I hold police officers in very high regard and have some in my family. I cannot thank you enough for what you do every day but also for going out of your way tonight to show this little boy some love. We have the blanket covering his incubator and the giraffe in the bed with him.”

We are all grateful for those that created the “Safe Place for Newborns Law.”

Father Ubel learned Thursday morning the officers who came to the Cathedral for the newborn went to the store to purchase items for the child and delivered them to the hospital.

The newborn was taken quickly from the Cathedral but not before Father Ubel was able to baptize him. He did so with the name Nathan John, for Leonhardt, whom Father Ubel called a wonderful man and a hero.

“I just felt that that it was the most appropriate thing to do,” Father Ubel said.

It’s not uncommon for people to be baptized in extenuating circumstances, he explained, and it was difficult to ascertain the baby’s condition. He also inferred that it was suitable from the child having been left the church.

“I also felt, quite honestly, that again, whomever did this, for whatever reason, I’m not going to judge,” he said, “ but they did feel appropriate to bring the child into a Catholic church.”

The state’s safe haven law allows mothers to give up their newborn children within seven days of birth to either a hospital or urgent care facility, or to call 911 to alert authorities of the child’s location.

Despite the church technically not falling under these parameters, both law enforcement and Minnesota Human Services commissioner Emily Piper urged the child’s mother not to fear prosecution or hesitate to seek medical care, saying that leaving the boy at the Cathedral was not a crime.

Piper said 10 babies were saved in Minnesota in 2015 through the law, and last year there were three children saved as of December 20, stressing increased awareness of the law.

She agreed with Father Ubel that the intent was clear to give the child life by leaving him at the church, and urged the mother to get medical attention if needed.

She also empathized as a mother of four with the difficulty of the decision to leave the baby.

“And I hope she has peace with the decision that she made,” Piper said.

Father Ubel told the media that the church would do all in its power to help people, to assist them to make the choice for life, and that the child had moved him greatly.

“It’s one of those days I’m never going to forget,” he said.

The baby was all he could think about all night after paramedics took him away, so he went to the hospital to try and check on him, and even dreamed about him later Wednesday night. He said was happy to get a phone call Thursday from authorities confirming the newborn was OK.

“A lot of things happen at the Cathedral,” Father Ubel said. “But we (him and Leonhardt) both agreed that this was the most amazing day since both of us have been here.”

“Right away Father Ubel baptized him with the name Nathan John. My heart melted and I still can't get over this. I am so grateful to work for the cathedral. And the situations I come across and the people I meet!”

“It was just a pretty profound moment for both of us really,” Father Ubel continued. “I mean, we see a lot as priests, but this clearly had me going, that’s why I had a hard time sleeping and probably why I was dreaming about the child and his well-being.”

It is important now to pray for the baby, he said, and to hope for a good ending “to very unexpected beginning.”

“What a joy it is to be able to receive this gift of life, this child is safe, and that’s the most important thing,” Father Ubel said.

Baby Nathan John will eventually be placed for adoption through authorities.