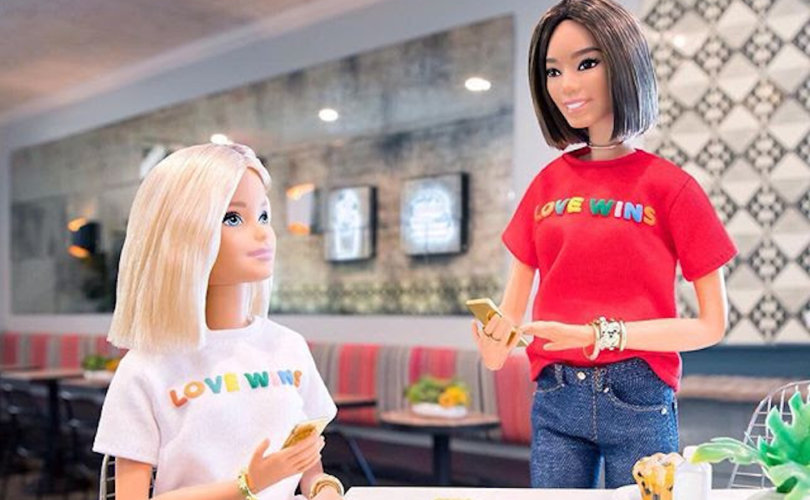 November 27, 2017 (LifeSiteNews) — The Barbie children’s doll is being used to further LGBT issues.

“Proud to wear this “Love Wins” shirt,” states a Barbie-associated Instagram account, along with a photo of two dolls wearing the LGBT-themed t-shirt.

The “Love Wins” slogan is associated with support for legalization of gay marriage.

Song confirmed via her Instagram account that the brunette doll was created for her and  sales of the t-shirt benefit an LGBT suicide prevention group. She thanked Mattel and Barbie, saying it was important to have the doll represent who she is and what she believes.

LifeSiteNews did not hear back from Mattel on an inquiry to confirm the dolls were licensed Mattel products and specifics of what the company sought to convey with them.

The @BarbieStyle Instagram account is run by Barbie staff designers, according to the fashion blog Racked. The account is focused on fashion and is separate from the Barbie account aimed at children and parents.

“@BarbieStyle is a curated, very specific story about Barbie’s role in pop culture today,” one of the staffers told Racked.

The two dolls are shown in a number of other fashion-related posts.

Pink News, a UK online LGBT newspaper, praised the Barbie doll in a post with the headline, “We’re massive fans of LGBT-rights Barbie and you should be too.”

“Barbie has come out in support of equal marriage and we love it,” the post said.

After first becoming famous for more than 50 years ago as a teen fashion model doll, albeit being criticized for unrealistic depiction of the female physique, the Barbie doll has evolved into many various versions through the years.

Mattel revealed 15 new Ken dolls for the Barbie and Ken franchise this summer, including several Man-Bun Ken versions. The less masculine Ken doll met with some ridicule on Twitter.