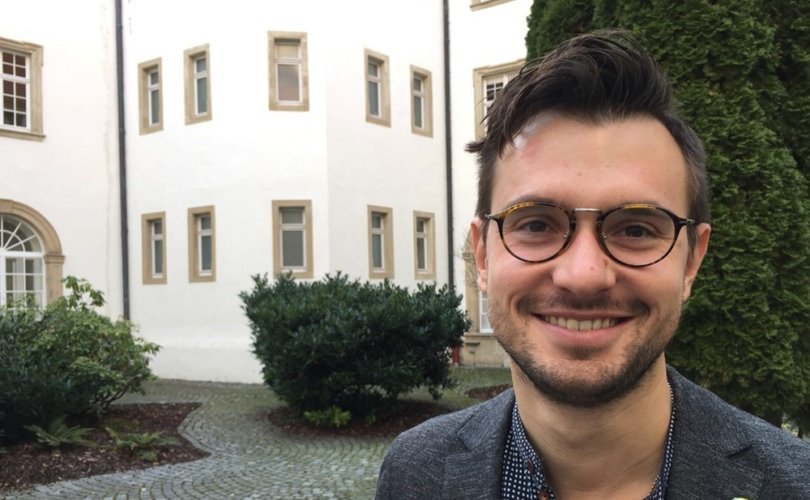 The newly ordained Fr. Fabian Ploneczka, 33, of the Rottenburg-Stuttgart diocese, celebrated his first Mass on Sunday, July 15 at his home church of St. Moritz in Augsburg. The Mass was preceded by three evening services, dubbed a “Triduum,” in the church, focusing on subjects of interest to the new priest. The events included a Saturday evening service dedicated to the theme of eroticism in the Christian faith.

According to the Augsburger Allgemeine, the worship service included the premiere of a ballet entitled “Jeremiah: Passion of the Prophet”, featuring ballet dancer Clemens Fröhlich of Munich and a narrated libretto written by Ploneczka himself. Observers told the German “Katholische Nachrichten”(kath.net) news site that the dancer performed dressed only in tight, skin-coloured underpants.

“The whole church became a dance floor, even the altar area,” kath.net reported. “There the dancer took the Gospel in his hand, stepped almost naked to the ambo, and lolled suggestively in front of the altar.”

Afterwards Fr. Thomas Steiger of Tübingen, a pastor and radio personality, gave a talk on the “eroticism of the faith,” speaking of “a sensual love for Jesus.”

According to kath.net, a young man interrupted the service by shouting that everyone should undress and began to follow his own advice, standing up to display his naked torso. Some of the attendees, among whom were children, left early.

“Worshipers told kath.net that there was a clearly homophile, yes, homoerotic event in a consecrated church,” the news site reported.

Gregory DiPippo, editor of the New Liturgical Movement blog, told LifeSiteNews that Catholics should not be forced to sit through such spectacles.

The Vatican's Congregation for the Sacraments and Divine Worship issued the authoritative Dance in the Liturgy in 1975. While allowing for liturgical dance in cultures that have retained dance as an expression of the sacred, liturgical dance is forbidden in the West.

“Here dancing is tied with love, with diversion, with profaneness, with unbridling of the senses,” the Congregation explained. “For that reason it cannot be introduced into liturgical celebrations of any kind whatever: That would be to inject into the liturgy one of the most desacralized and desacralizing elements, and so it would be equivalent to creating an atmosphere of profaneness which would easily recall to those present and to the participants in the celebration worldly places and situations.”

It particularly singled out ballet as a performance, not as an appropriate or possible part of communal worship:

“Neither can acceptance be had of the proposal to introduce into the liturgy the so-called artistic ballet because there would be presentation here also of a spectacle at which [only] one would assist, while in the liturgy one of the norms from which one cannot prescind is that of participation [by all].”

“The then-prevailing ultra-conservativism there threatened to suffocate him”

According to the Augsburger Allgemeine, Ploneczka was the first priest to say his First Mass in St. Moritz’s church in 75 years. Born and raised in Augsburg, Ploneczka told the city paper that he had become an altar server at St. Moritz’s as a 9 year old child and thereafter deepened his faith. Ploneczka was encouraged by his mentor, Helmut Haug, currently St. Moritz’s pastor, to become a priest. After finishing his studies at the “Theresianum” Carmelite college in Bamberg, Ploneczka entered the Augsburg seminary. However, he soon left.

“The then-prevailing ultra-conservativism there threatened to suffocate him,” reported the city paper.

The teenager found the breathing easier in Munich, where he studied theology and philosophy with the Jesuits. However, not liking what he thought were the overly clerical “pastoral ideas” he experienced in Bavaria, Ploneczka applied to become a seminarian for the Rottenburg-Stuttgart diocese. Nevertheless, he maintained strong ties to the Diocese of Augsburg’s St. Moritz’s parish as he prepared to become a priest and was ordained in Stuttgart on July 7.

After his Ordination Mass, the Augsburger Allgemeine reported, Ploneczka, who does not like clerical dress, appeared in a grey checked suit, brown shoes and a tie.

Ploneczka told his interviewer that he wanted the events at St Moritz to be less of a celebration of his ordination than his thanksgiving to the community that had supported him through his journey to the priesthood.

The St. Moritz’s Church (Moritzkirche) website lists the various events surrounding Ploneczka’s First Mass. They included the presentation of Dr. Katharina Ceming and the “Women’s Circle” on the topic “Love is not like Love” during Thursday’s evening service, a lecture by Fr. Matthias Bambynek on “A Look in the Mirror” during Friday’s evening service, and the ballet and lecture during the aforementioned service on Saturday night. After Fr Ploneczka’s first Mass on Sunday morning, there was a champagne reception in the church square.

The Catholic Church in Germany has increasingly captured the attention of Catholics around the world for its bishops’ worrying innovations in several aspects of Church life, particularly in liturgical practises and novel doctrines concerning ecumencial dialogue, marriage and the family.