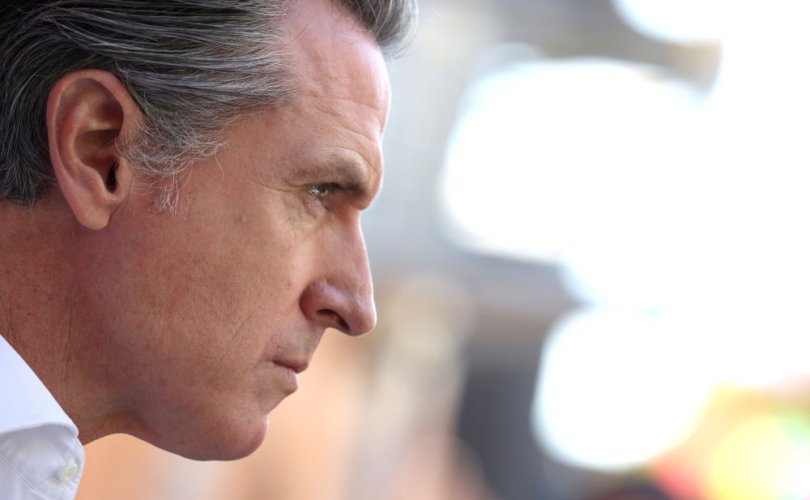 SACRAMENTO (LifeSiteNews) — California’s radically pro-abortion Gov. Gavin Newsom is continuing to make the Golden State a “sanctuary” for abortion, opting to put up billboards in pro-life states promoting the ease with which women can kill their babies in California. Critics have blasted the effort as “evil” and “shameful,” particularly as some signs quote Scripture to justify the murder of preborn babies.

The moves come days after Gov. Newsom, a self-professed Catholic, announced the launch of a taxpayer-funded abortion resource website encouraging women in pro-life states to travel to California to legally kill their babies.

Newsom, who is running for re-election this year, announced the decision to run the billboards in a Thursday tweet, claiming that the Golden State “will defend” abortion-seeking women’s “right to make decisions about your own health” against the pro-life laws enacted in so-called “anti-freedom states.”

NEW: Just launched billboards in 7 of the most restrictive anti-abortion states that explain how women can access care–no matter where they live.
To any woman seeking an abortion in these anti-freedom states: CA will defend your right to make decisions about your own health.

The signs, which are paid for by Newsom’s re-election campaign, contain messages informing pregnant women that their pro-life state “doesn’t own your body” and directing them to California’s abortion website: www.abortion.CA.gov.

Billboards slated to go up in Mississippi and Oklahoma differ from the signs planned for the other states, and inform women that “California is ready to help” if they “need an abortion.”

The signs also contain a quotation from the Gospel of Mark 12:31, which reads: “Love your neighbor as yourself. There is no greater commandment than these.”

Former Republican congressional candidate David Giglio blasted Newsom for the ad campaign in a Thursday tweet, highlighting a litany of issues the governor should be tackling rather than inviting women to visit California to kill their children.

“‘Good Catholic’ @GavinNewsom is now using Bible scriptures to encourage women to come to California to abort their babies. A truly shameful display,” Giglio said. “Meanwhile, in CA crime continues to skyrocket, the cost of living is out of control, and the state can’t even keep the lights on.”

Meanwhile, one Twitter user suggested that Newsom include another Bible verse in his campaign ads: Deuteronomy 5:17.

Taken from the 10 Commandments, the verse reads simply: “You shall not murder.”

Care to include Deuteronomy 5:17?

Newsom’s controversial ad campaign is far from the only move the radically pro-abortion governor and his Democrat-dominated legislature have made as the abortion landscape in America shifts considerably in response to the U.S. Supreme Court’s landmark reversal of Roe v. Wade.

“The Supreme Court has made it clear – they want to strip women of their liberty and let Republican states replace it with mandated birth because the right to choose an abortion is not ‘deeply rooted in history,’” Newsom said, vowing that he and his fellow West Coast governors “will fight like hell to protect our rights and our values.”

Earlier this month, the California legislature passed a radical pro-abortion law that will expand abortion access, prohibit investigation into the death of an unborn child, and provide legal protections for anyone who obtains or helps someone obtain an abortion.

Pro-abortion California legislators are also working to create an amendment enshrining the “right” to abortion into the state constitution and launch a fund using taxpayer dollars to help bankroll abortions for nonresident women.

In contrast to California’s full-throttle abortion activism, a growing number of U.S. states have moved to enact protections for the preborn.

On Friday, West Virginia’s Republican governor signed a sweeping pro-life bill banning nearly all abortions from the moment of implantation.

LifeSiteNews is maintaining an interactive map of the states that have implemented legal safeguards for babies in the womb. The map and detailed descriptions of the laws can be accessed here.