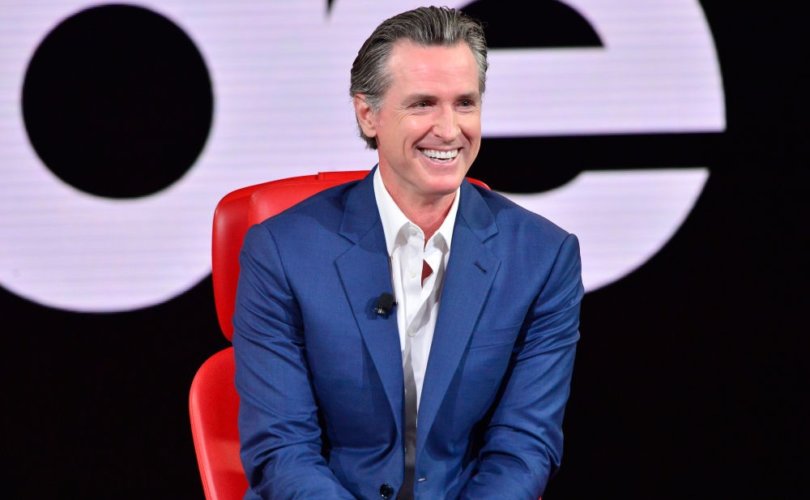 SACRAMENTO, California (LifeSiteNews) — California Democratic Gov. Gavin Newsom on Tuesday signed a raft of radical new laws expanding abortion access throughout the Golden State. The bills will allocate over $200 million in new abortion funding, greenlight recruitment of abortionists to broaden availability, and ensure that almost no abortion will be prosecuted under the law.

The legislative package also includes a controversial bill that critics have warned could be interpreted as decriminalizing infanticide.

In a September 27 press release, Newsom explicitly said the laws are meant to stand in opposition to legislation recently passed in Republican-led states to enshrine legal protections for the unborn.

Democratic Gov. Gavin Newsom has signed more than a dozen laws aiming to make California an abortion sanctuary state. Several of the new laws deliberately clash with restrictions in other states. https://t.co/IGD3P1D5Li

“An alarming number of states continue to outlaw abortion and criminalize women, and it’s more important than ever to fight like hell for those who need these essential services,” Newsom said, according to the press release.

Perhaps the most well-known law signed as part of Newsom’s abortion package was AB 2223, dubbed “the infanticide bill” by pro-life critics.

As LifeSiteNews previously reported, pro-life attorneys and activists have argued the bill could legalize infanticide by prohibiting the investigation or prosecution of any woman or abortionist for “pregnancy outcomes,” including abortion, miscarriage, and “perinatal death,” a nebulous period that can span as far as two years after a child is born.

Though a later draft of the law was amended to specify “perinatal death due to causes that occurred in utero,” sources have told LifeSiteNews the amended language remains problematic and could still decriminalize the murder of infants even outside the womb.

A.B. 2223 is a pro-infanticide bill that blocks investigations into miscarriage, stillbirth or abortion even if a coroner sees evidence of foul play in the child’s death, including drugs in the baby’s system.

Other laws signed by Newsom on Tuesday include AB 2091 and AB 1242, which promote California as a destination for abortion tourism by shielding women from pro-life states who opt to kill their unborn babies in California.

AB 2091 prevents California health care providers from releasing medical information related to abortions even if served with a subpoena. AB 1242 forbids law enforcement cooperation between California and pro-life states if states seek to prosecute an abortion obtained in California.

SB 1375, which also received Newsom’s rubber stamp on Tuesday, will increase the number of people authorized to commit abortions in California by expanding “training options for Nurse Nurse Practitioners and Certified Nurse-Midwives for purposes of performing abortion care by aspiration techniques.” So-called “vacuum aspiration” is an in-clinic abortion procedure that involves sucking the infant out of the womb and using a metal tool to scrape out the child’s remains from the mother’s uterus.

Additional legislative items signed by Newsom will expand the state’s self-described status as a “sanctuary” for abortion by:

Additional measures will protect abortionists from having their licenses pulled for committing abortions (AB 2626), and allocate $20 million for an LA County program “to support innovative approaches and collaborations to safeguard abortion access.”

The Steering Committee of the California Future of Abortion Council hailed the legislation in a statement included in the governor’s press release.

Claiming that “California continues to take historic steps towards its promise to be a Reproductive Freedom state,” the committee remarked that “in addition to the $200+ million in new funding,” the bills “will go a long way in helping people seeking care in California and the community organizations and providers already on the ground doing the work across the state.”

Pro-lifers, however, have noted that the new laws present extreme danger to the lives of preborn babies.

“All year we have been fighting these bills to make people understand what is coming down the pike,” California Family Council (CFC)’s Greg Burt said in a Facebook livestream. “It is really horrendous.”

The legislative package comes as Newsom has made abortion a core element of his leadership and a central plank of his re-election campaign, deliberately positioning California in opposition to the dozens of Republican-led states that have enacted legal protections for the unborn following the U.S. Supreme Court’s landmark decision to roll back 49 years of federal abortion precedent by overturning Roe v. Wade (1973) and Planned Parenthood v. Casey (1992).

Several weeks ago, Newsom paid for a highly controversial ad campaign to set up abortion advertisements on billboards in pro-life states. Some of the billboards included misquoted Scriptural passages to promote the murder of the unborn, drawing widespread backlash from Christians and other conservatives.

In November, California voters will decide whether or not to create an amendment enshrining the “right” to abortion into the state constitution.