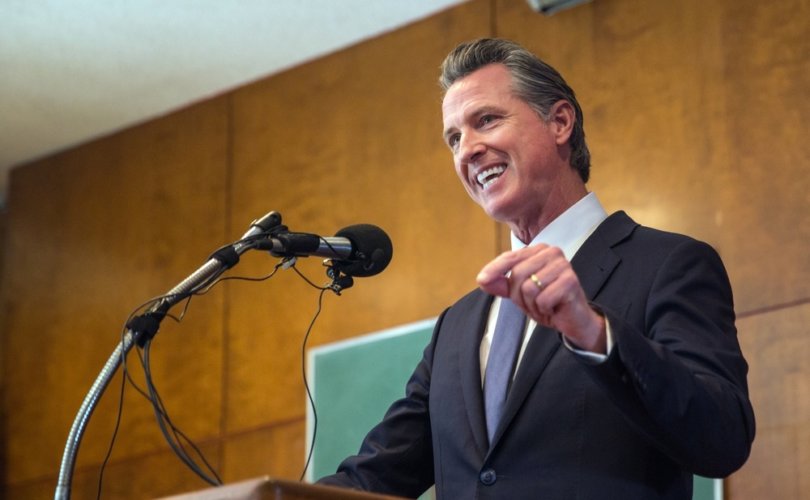 The newspaper cited officials who reportedly stated that “[c]o-pays and deductibles can surpass $1,000 and tend to get more expensive as the fetus develops, often putting pregnant people who need or want abortion services in a position where they cannot afford reproductive care.”

“With this legislation, we’ll help ensure equitable, affordable access to abortion services so that out-of-pocket costs don’t stand in the way of receiving care,” Newsom said in a statement.

The governor’s wife, Jennifer Siebel Newsom, who is identified as the “First Partner,” said in a statement that the passage of SB 245 ensures that individuals seeking abortions have “autonomy over their own bodies and the ability to control their own destinies.”

SB 145 was authored by Democratic Sen. Lena A. Gonzalez of Long Beach, California, and is slated to take effect at the beginning of 2023.

The language of the legislation avoids referring to abortion-seekers as women, instead noting that under existing law, the state is prohibited from “denying or interfering with a person’s right to choose or obtain an abortion prior to viability of the fetus, or when the abortion is necessary to protect the life or health of the person.”

Backers of the legislation have asserted that abortion restrictions disproportionately impact minorities, the disabled, members of the LGBTQ community, and low-income Americans.

Shannon Olivieri Hovis, Director of NARAL Pro-Choice California, said in a statement last year when the bill was introduced that “pregnant people of color, LGBTQ people, and people with lower incomes have been disproportionately harmed by financial barriers to abortion care.”

Jodi Hicks, president and CEO of Planned Parenthood Affiliates of California, praised the legislation in a statement Tuesday.

“Eliminating out-of-pocket costs for abortion for people with private insurance is a major step in California’s commitment to being a Reproductive Freedom state — making abortion services more accessible and affordable for all people in California,” Hicks said. “SB 245 becoming law means that more Californians will be able to access the care they want, when they want.”

“Most people in 2022: Food has become so expensive, fuel/gas has become unaffordable, inflation has become unbearable. California lawmakers in 2022: Dear poor people, we can give you cheap abortions! Do 1 abortion, get 2 free! #Evil,” Ekeocha wrote.

California lawmakers in 2022: Dear poor people, we can give you cheap abortions! Do 1 abortion, get 2 free!#Evil pic.twitter.com/uJIwOp7bXF

“The Legislature is also considering measures to allow nurse practitioners to perform abortions, and to create a fund for people traveling from out of state to access services,” suggested San Francisco Chronicle politics editor Sara Libby in a Tuesday tweet.

Last week, Democratic state Sen. Nancy Skinner proposed a bill to create such a fund for women traveling from pro-life states like Texas to abort their unborn babies.

According to Skinner’s Senate webpage, “SB 1142 would establish a first-of-its-kind fund composed of state and philanthropic dollars that would significantly increase funding for abortion services for low-income Californians and for out-of-state residents who may come here for an abortion.”

The moves come after Newsom promised California would be a “sanctuary” for abortion as numerous right-leaning states throughout the country have enacted laws restricting or banning the procedure in anticipation of the U.S. Supreme Court’s ruling in Dobbs v. Jackson Women’s Health Organization, which concerns Mississippi’s ban on abortions after 15 weeks gestation. A ruling favorable to Mississippi could see the federal “right to abortion” restricted or overturned this summer, allowing individual states to make their own laws regarding abortion.

Many states have already moved to enact pro-life laws in advance of the Supreme Court’s ruling.

Last year, Republican Gov. Greg Abbott signed the Texas Heartbeat Act into law, banning abortions after about six weeks gestation in the Lone Star State, sparking copycat legislation and generating national controversy. The life-saving law, which has reportedly reduced Texas abortions by 60%, has so far been upheld by both the Texas Supreme Court and the U.S. Supreme Court.

Republican lawmakers in other states, including Idaho,  Florida, Oklahoma, and South Dakota, have subsequently introduced pro-life legislative proposals based on the Texas law.

Democrat governors including Newsom and New York’s pro-abortion Gov. Kathy Hochul have responded to the rash of pro-life legislative proposals by inviting women in pro-life states to travel to their states to obtain abortions.