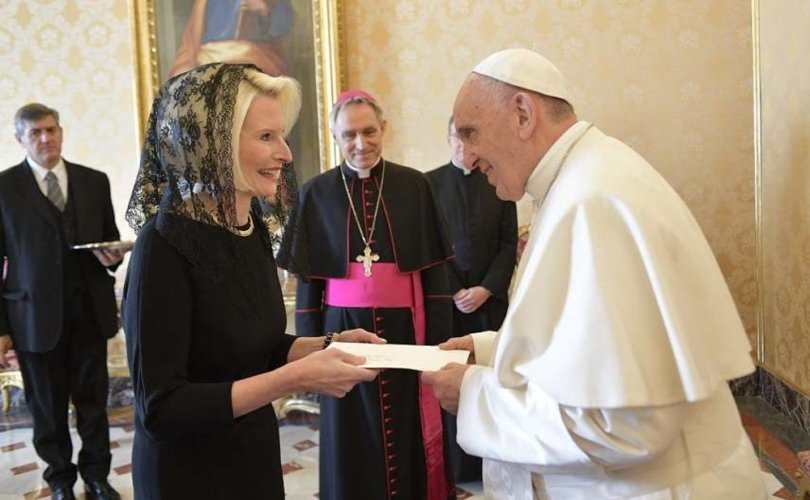 ROME, December 22, 2017 (LifeSiteNews) – U.S. President Donald Trump’s new envoy to the Holy See, Callista Gingrich, presented her credentials to Pope Francis this morning at the Vatican, officially marking the beginning of her mission as United States Ambassador to the Holy See.

Ambassador Gingrich faces a difficult job as the U.S. President and the Pope have a history of clashing. Pope Francis has called Trump “not Christian” for proposing to protect America by building a wall on Mexico’s border. But Trump retorted that “No leader, especially a religious leader, should have the right to question another man's religion or faith.” The Pope has questioned if Trump is a “good pro-lifer” because of his immigration stances, despite Trump being the driving force behind numerous U.S. pro-life victories.

Gingrich will face a number of challenges in smoothing relations between the Trump administration and this pontificate, most notably concerning immigration, economics, and the environment. President Trump’s decision to withdraw from the Paris Climate Accord (unless there are major changed to the pact) met with considerable disapproval at a Vatican-sponsored 'climate change' conference last November. Featured speaker Jeffrey Sachs, a pro-abortion population control activist, called the Trump's decision “stupid, harmful, and dangerous.”

Ambassador Gingrich, from McLean, Virginia, is the former President and CEO of Gingrich Productions. She and her husband have produced ‘Nine Days that Changed the World,’ a documentary film on Pope John Paul II’s historic nine-day pilgrimage to Poland in June of 1979 before the fall of Communism, and ‘Divine Mercy: The Canonization of John Paul II.’

Gingrich, 51, is also the author of the “Ellis the Elephant” children’s American history series and co-author of “Rediscovering God in America.”

The new ambassador previously served as a congressional aide in the U.S. House of Representatives, as the President of The Gingrich Foundation, and as a member of the Choir of the Basilica of the National Shrine of the Immaculate Conception in Washington, D.C.

A Catholic of Swiss-Polish ancestry, Gingrich was influential in her husband’s reception into the Catholic Church in 2009.

While Gingrich is credited with having played an important role in her husband’s conversion, she is equally well known for having had a long affair with Newt Gingrich while he was married to another woman. Newt divorced his second wife in 1999 and married Callista in 2000. He converted to Catholicism nine years later.

Some conservative Catholic Americans are uneasy about the appointment due to Gingrich's past.

“This is not a minor thing. It has a chokehold on public perception, throttling the flow of public expressions of goodwill.  It will likely remain in place because American Catholics have never heard a single word of admission or, far more importantly, a word of repentance, about that affair,” wrote Doug Mainwaring in a piece published on LifeSiteNews last May.

According to a US Embassy statement released today, Ambassador Gingrich “looks forward to working with the Holy See to defend human rights, advance religious freedom, combat human trafficking, and to seek peaceful solutions to crises around the world.”

Due to prior commitments, Gingrich will not be spending Christmas in Rome but will return after the holidays to resume her duties as the United States Ambassador to the Holy See.