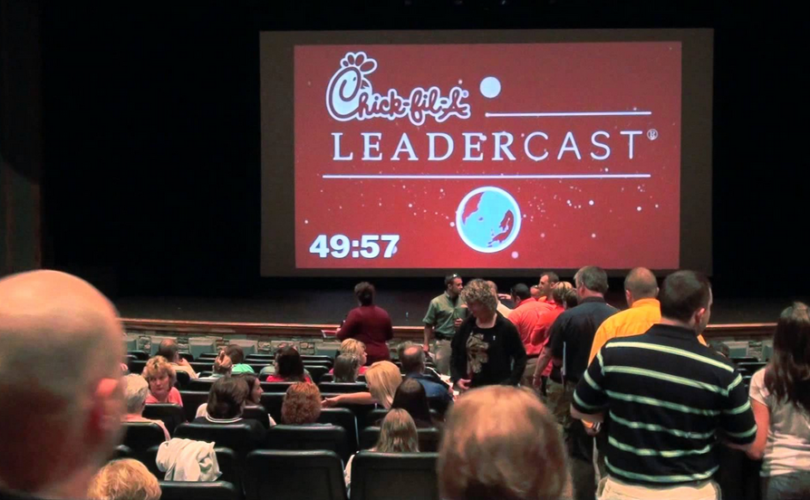 The councillor who lead the charge against Leadercast because it was sponsored by fast food chain Chick-fil-A now says it was all a mistake.

Nanaimo City Council has evidently decided its reputation has taken enough of a hit after it decided to cancel a simulcast leadership conference in May featuring world renowned speakers and that was viewed by 100,000 people across Canada and the U.S., because of unproven allegations of “homophobia.”

Last week, council voted down a motion to investigate how it was convinced to make the decision that turned the council into an international laughingstock.

And now Councillor Fred Pattje, the man who convinced fellow councillors back in May that one of Leadercast’s American sponsors and one of its speakers were “homophobic” and “divisive,” admits that it was all a mistake.

“I came to conclude that things should have been done differently,”  Pattje told LifeSiteNews. Next year, he said, council will not oppose the event. If the city’s homosexual community didn’t like it, “they can organize a protest.”

Though the motion to investigate the decision was defeated, there is really no mystery: council simply believed everything E.T. Turner, vice president of the Vancouver Island Rainbow Association, told them, first about Leadercast sponsor Chick-Fil-A and its president and COO Dan Cathy, and second, about speaker Henry Cloud.

Though Turner claimed Cathy had described himself as “proudly antigay,” when challenged by LifeSiteNews last week, could not find any source for this claim.

As for speaker, Dr. Henry Cloud, she says he supported “reparative therapy,” a cognitive, or “talk” therapy aimed at helping people deal with unwanted same-sex attraction. Turner also couldn’t provide LifeSiteNews with any evidence Cloud had ever provided reparative therapy, suggesting that the Internet had been “scrubbed” of any such references.

For those who viewed the original televised council meeting, it is clear it never occurred to councillors they were doing anything objectionable.

But while several local sponsors had already been cowed into abandoning the event, not so the Nanaimo Daily News and the Evangelical Ministerial Association. They quickly protested the council’s decision.

They also found  a powerful ally in the Sun News Network’s Ezra Levant. He brought the full force of his show, “The Source,” and his contempt, against city council. He mocked members as “ignoramuses,” “bigots” and “haters,” and charged them with not only with violating the Charter of Rights and Freedoms, contract law, and their duty to the citizens of Nanaimo, but with anti-Christian discrimination. He also raised more than $5,000 for a legal defence fund and garnered 6,000 signatures for an anti-council petition.

Council backed down with embarrassing swiftness (though not swift enough to permit the conference to go ahead) and commissioned city staff to compile all correspondence on the affair. But that was not good enough for councillor Bill Bestwick, who at last week’s council session presented the failed motion that there be a “full investigation” into the affair.

As for Pattje, he says he “never wanted to put out the idea that if you don’t support same sex marriage you can’t get into city facilities.”

But still hanging over council is the stench of politically-correct intolerance.

While much of the council’s decision was based upon Dan Cathy’s alleged “homophobia,” all Cathy ever said about himself, in 2012, was that he was “guilty as charged” of supporting “the biblical definition of the family unit” and that gay “marriage” invites “God's judgment on our nation.”

Also often offered as proof of Cathy’s “homophobia” are his contributions to organizations such the Family Research Council, a Washington D.C.-based Christian think tank that lobbies against the normalization of homosexuality and produces research on the pragmatic benefits of heterosexual marriage and the ill-effects of homosexuality.

The widely repeated allegations that FRC’s activities are “hateful” were taken seriously by one homosexual activist who two years ago entered the FRC’s Washington D.C. headquarters, intending to shoot everyone he encountered and to stuff Chick-Fil-A burgers in the mouths of his victims. He was disarmed by a guard, but not before the guard was shot in the arm.

One would-be victim, Dr. Patrick Fagan, director of the FRC subsidiary group, the Marriage and Religion and Research Institute (MARRI), told LifeSiteNews it is not homophobic to study the social impacts of homosexuality.

What MARRI research reveals, says Fagan, is that “across all measures of matters sexual – pornography, divorce, adultery, contraceptives, out-of-wedlock sex – Christian behaviors yield better results,” in terms of mental and physical health, longevity, income, and children’s success. “This is true regardless of whether you actually are a believing Christian, as long as you follow the behavior,” he said.

Still, since city council clearly believes opposing or counselling against homosexual behavior is self-evidently hateful, why then did it peremptorily back down and rescind the first motion?

Clearly councillors were taken aback by the combined negative reaction from Ezra Levant, their local newspaper and the Evangelical Christian community.

“I got hate mail, I got a lot of it,” Pattje admitted to LifeSiteNews, much of it from aggrieved Christians even though, “my original motion…never mentioned religion.”

Perhaps Levant also managed to persuade a few of the councillors that the Charter’s guarantee of freedom of speech, freedom of assembly, conscience and religion applies in Nanaimo. Perhaps they heard and understood Pastor Darcy Siggelkow of Nanaimo’s Generations Church when he declared, “I'm not asking you to agree with or accept my opinions and beliefs… but my rights to have those beliefs.”

Or perhaps they realized that the next municipal elections will come in November.