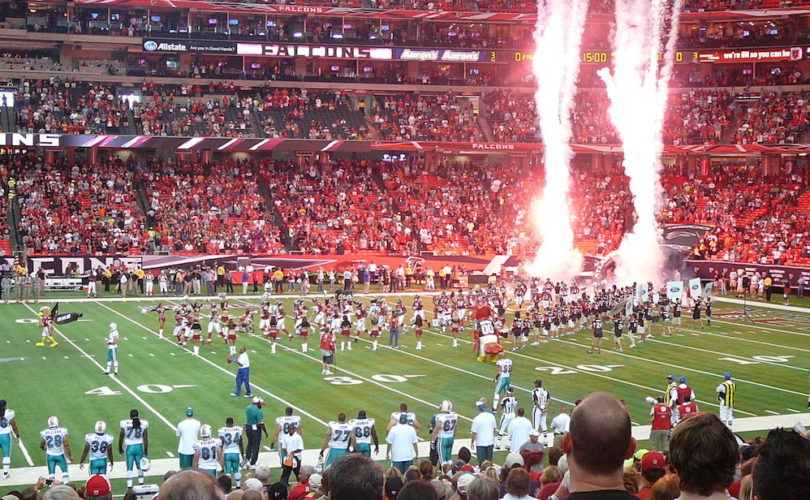 ATLANTA, Georgia, March 22, 2016 (LifeSiteNews) — The National Football League (NFL) says Atlanta could be left out of consideration for hosting a Super Bowl if new legislation is enacted that aims to protect the conscience rights of citizens who oppose same-sex “marriage.”

“NFL policies emphasize tolerance and inclusiveness, and prohibit discrimination based on age, gender, race, religion, sexual orientation, or any other improper standard,” spokesman Brian McCarthy said in a statement. “Whether the laws and regulations of a state and local community are consistent with these policies would be one of many factors NFL owners may use to evaluate potential Super Bowl host sites.”

The bill itself combines several pieces of legislation that passed the state legislature last week. It allows pastors to not perform same-sex “marriage” ceremonies and allows religious-based groups to make hiring and retention decisions based upon religious beliefs and practices of employees.

It also allows the government to enforce contracts and grants, and groups must follow federal non-discrimination policies, which currently do not address LGBT issues.

The bill has changed dramatically since first passing the state House last month. At the time, the bill was simply protecting pastors, though other provisions that were considered included those that would allow all businesses the chance to deny participating in events and providing related services that they objected to.

Georgia Gov. Nathan Deal spoke against the original version of the Pastor Protection Act after it unanimously passed the Georgia House, saying the religious protections were unChristian. “What the New Testament teaches us is that Jesus reached out to those who were considered the outcasts, the ones that did not conform to the religious societies' view of the world,” Deal said. “We do not have a belief in my way of looking at religion that says we have to discriminate against anybody. If you were to apply those standards to the teaching of Jesus, I don't think they fit.”

However, on Saturday, Deal indicated the combined legislation could garner his support. A spokesperson for Deal did not respond to LifeSiteNews' request for comment as to what changes had occurred in the legislation to possibly change the governor's mind on the bill.

Deal's original and new comments, as well as those from McCarthy, come as an estimated 400 corporations try to pressure Georgia into ignoring the rights of those with traditional views on marriage.

Some of the businesses opposing the bill are the Atlanta Braves, the Atlanta Falcons, AIG, Google, UPS, and Apple. Many of these same corporations pressured Indiana Gov. Mike Pence into abandoning a state-based Religious Freedom Restoration Act last year — even though the law was similar to the federal version backed by the ACLU in 1993.

While conventional wisdom states hosting a Super Bowl is of enormous economic benefit to a city, numerous studies have found the benefits may be relatively modest. “When one looks back at the actual data, we don’t find bumps of hundreds of millions of dollars,” sports economist Victor Matheson told FOXBusiness.com. “When economists do look back, we find increases in economic activity of $30 million to $120 million.”