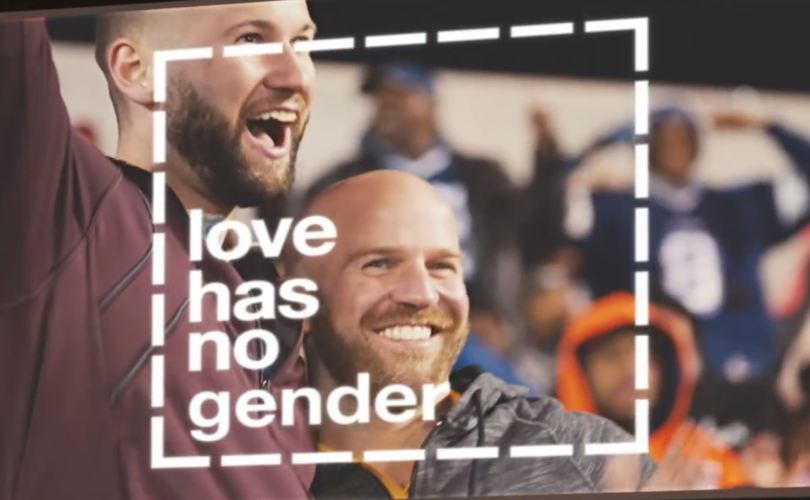 Two gay men enjoy a moment of fame after they were pictured on the Kiss Cam at the NFL Pro Bowl.

At the NFL’s annual all-star game the week before the Super Bowl, a “Kiss Cam” scoured the crowd at Camping World Stadium in Orlando, Fla., to film kisses or hugs between lovers or friends. Using “Kiss Cam” footage of two homosexual men kissing and two lesbians kissing, the NFL and the Ad Council — using tax dollars — has produced an ad campaign entitled “Love has no labels.”

There is no warning at the beginning of the ad telling parents that children or offended adults will be exposed to a video that may be disturbing or contrary to their values.

According to the Ad Council, the video featured people “across different races, religions, genders, sexualities, abilities and ages.”

After showing the homosexuals kiss, the ad concludes, “Love is about who you are, not what you are. Rethink bias.”

While the mainstream media call the ad “beautiful” and “well done,” Christian leaders are denouncing it.

Rev. Graham broadened his comment to apply to all of society. “This generation is being bombarded with an upside-down version of truth and love,” he posted on Facebook. “Don’t fall for it.”

The leader of the Billy Graham Evangelical Association advised Christians to voice their opinion.

“We have to love people enough to tell them the truth about sin and warn them of its consequences as defined by God, not man,” Graham wrote. “Go to the NFL’s Facebook page and tell them how disappointed you are that they are promoting this agenda.”

The gay-promotion ad campaign was praised by homosexual activist groups such as OutSports. Pink News called the ad “super cute” because it included gay kisses.

The NFL, which has officially supported gay “tolerance and inclusiveness” for years, entered the political arena on the side of homosexuals last year, when it openly warned the state of Georgia not to pass a religious freedom bill that would protect Christians from discrimination based on their views against same-sex “marriage.” It threatened Georgia that passing the bill would negatively influence NFL owners as they “evaluate potential Super Bowl host sites.” The NFL has issued the same warnings this year to the state of Texas, which is proposing legislation to require persons to use restrooms according to their biological gender.

The Ad Council has been making commercials and print ads with tax dollars since the 1940s. The nation's leading producer of “Public Service Announcements” is led by a board of directors that includes senior officers from Google, AT&T, and the Meredith Corporation.

The Ad Council's stated mission is “raising awareness and inspiring action … that improve everyday lives.” They accomplish this using millions of dollars in public and private funding. In 2014 alone, the Ad Council spent $32 million in such funding for its commercials, which by government mandate are broadcast by networks for free.

The pro-gay ad campaign was also assisted by the R/GA advertising agency, founded by Richard and Robert Greenberg in the 1970s. The Greenbergs' faith in Numerology led them to restructure their business every nine years.

Both social and economic conservatives have long criticized the Ad Council as a waste of tax money.