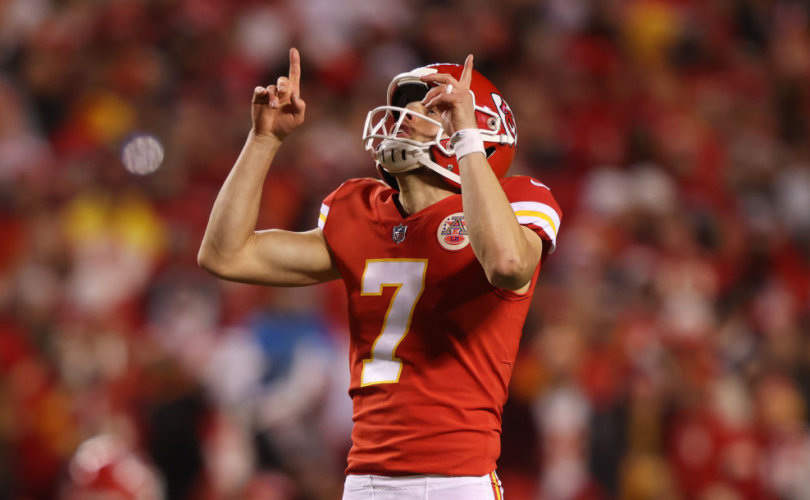 (LifeSiteNews) — A Super Bowl-winning kicker for the Kansas City Chiefs said his greatest goal is not winning more championships but helping his family get to heaven and using his platform to defend the Traditional Latin Mass (TLM).

“I think God has definitely given me a platform,“ Harrison Butker told Catholic News Agency when asked why he is speaking out about the restrictions on the TLM. “He’s given me a voice for a lot of people that aren’t able to voice their opinions. I put so much into being the best kicker I can possibly be and for whatever reason, God has allowed me to continue to be successful as a kicker.” He appears in the Mass of Ages film and serves at the TLM.

He said his successful career has given him a “pedestal” and he has “a responsibility to raise awareness to different issues that I think God wants me to bring to the forefront. And the Traditional Latin Mass is definitely one of them.”

Butker said “persecuted” is the best way to describe how he feels, in reference to both the restrictions of Traditionis Custodes, Pope Francis’ motu proprio that restricted access to the TLM, and the recent Responsa ad Dubia, which interpret the motu proprio in an even more restrictive way.

The Responsa say diocesan bishops should forbid their priests from offering the traditional form of baptism, penance, Holy Communion, matrimony, and extreme unction, though the legislative force of the document remains dubious, according to some canonists.

He said he wants “to be obedient to the Church” and “stay within the Church,” but it “seems like I’m getting persecuted just because I have a love for the traditional rite.”

He said if he could have a one-on-one meeting with Pope Francis, he would tell him that the crackdown has isolated traditional Catholics.

“Holy Father, all the Catholics that I’ve been around that have a devotion to the Traditional Latin Mass and the traditional sacraments, they want to be saints,” he said. “They want to get their children to heaven. They’re not trying to have this big revolt against the Church. They’re not denying the papacy.”

“And now it’s being brought into question whether Catholics who prefer the traditional sacraments for the means of their salvation are even good Catholics at all. And I think that really isolates a lot of traditional Catholics,” Butker said.

“And from my experience, these are just people that understand they are sinners,” he said. “They want to have access to the sacraments.”

Butker ended with some advice for his fellow Catholics who feel persecuted by the crackdown in the Church on the traditional sacraments.