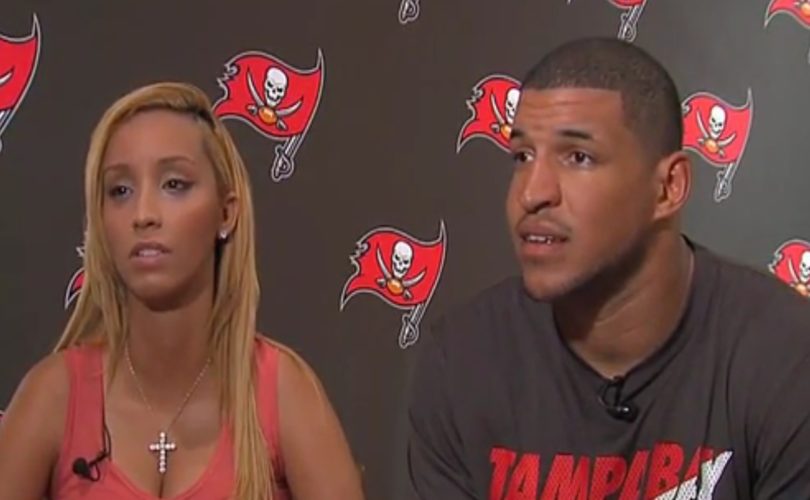 TAMPA BAY, FL, August 26, 2015 (LifeSiteNews) — Their child might only live a few hours, but an NFL player and his wife say that prayer led them to not abort Layla Sky.

According to Evan Rodriguez, who was released by the Tampa Bay Buccaneers last week, his wife Olivia is due with their first child in December. Named Layla Sky, she was diagnosed with anencephaly, and is expected to be born with parts of her brain and skull missing — and to only live a few days.

“From that moment on, I'm like, what can we do?” Rodriguez told Tampa Bay's ABC News affiliate about his reaction after the diagnosis. The doctor told the couple to “either terminate it or move forward with the process.”

The couple, which prays together each morning, spent a week making their decision. “God, show me what it is that you want to do through all of this. What’s the good to come out of it?” asked Olivia each morning.

“We decided to continue with the process because we felt like who are we to determine a baby’s life. So, we are going to leave it in God’s hands,” Rodriguez said.

In addition to preparing for the arrival of Layla, Olivia and Evan are raising awareness of anencephaly. At practices, Rodriguez wore a towel with his daughter's name, and created the hashtag “The Fight for Layla Sky.” Their Facebook page has more than 2,600 followers. On Monday, Rodriguez posted that “most of the time we plan on teaching our child about the world never expecting you have to teach the world about your child.”

ABC reports Olivia and Evan are using the hashtag to advise women on how to avoid birth defects, and they are partnering with Duke University to study the disorder their child has. The CDC estimates that one in 4,859 babies are born with the disorder.

“It felt like it was our job to let other people know about this,” said Rodriguez, who said he knows he'll see her again. “She’ll be waiting up there saying daddy. So, there’s a time and place for everything.”

Rodriguez said his daughter's name came from how “I always zone out and look at the sky and wonder what else is out there.” He is hoping to be picked up by another NFL team.

Told to abort, family of baby with hydrocephalus glad they chose life