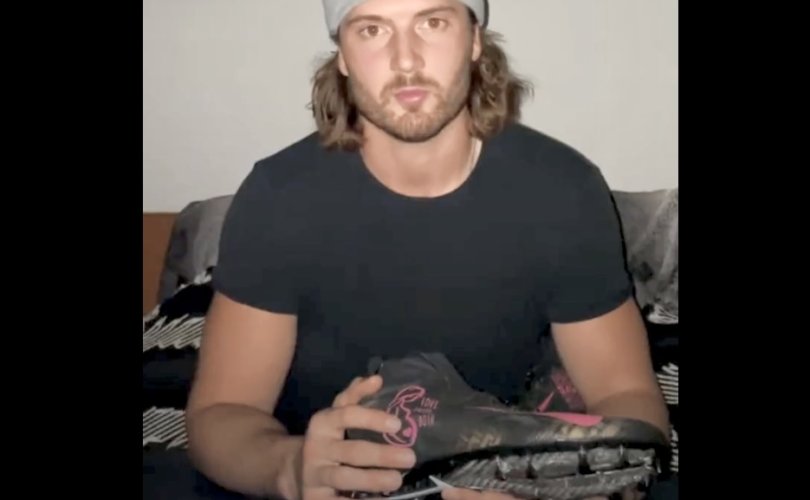 Jacksonville Jaguars tight end Jacob Hollister promoted Live Action as part of the NFL’s My Cause My Cleats campaign, which allows players to wear custom cleats featuring charities of their choice that are auctioned off after the game. The proceeds of the auction go directly to the charity.

Hollister cited his pro-life beliefs and the Dobbs vs. Jackson case at the U.S. Supreme Court as reasons for his decision.

In a video posted online, Hollister said he hesitated to support the charity at first but decided to do so. “I fear that anybody who feels differently than I do about [the decision] would feel anything but love from me,” Hollister said. “Because the way that I was raised and the way that I try to live my life to the best of my ability is to love people first in everything that I do and love people really well.”

BREAKING:@Jaguars tight end @hollister_jacob is boldly standing for LIFE, selecting Live Action as the cause to put on his cleats

“Both moms and babies have equal worth and demand equal protection. I’m thankful & happy to support Live Action who gives those babies a voice”

The cleats feature an image of a pregnant mother holding her womb on one side with the caption “Love them both,” and on the other the phrase “Save lives.”

Lila Rose, president of Live Action, said in a statement, “The world needs more athletes like Jacob Hollister who are willing to stand up for the basic human rights of the preborn on his vital platform. … Even in the face of opposition, Jacob is using his voice to speak for the most vulnerable members of our society.”

Hollister’s decision was not without controversy. Users on the Jaguars’ Reddit page leveled a variety of criticisms at him that ranged from several saying he should have been forced to change his charity to another that said he should not be allowed an opinion on abortion until he adopts multiple children. One moderator posted a donation page to Planned Parenthood in an apparent attempt to counteract Hollister.

The page was not without users defending Hollister. “Well, how divisive things are right now, I am done being enraged about people’s choices. … We want him cancelled over shoes?” one post read. “Honestly, I dont [sic] understand why this was even posted, other than to stir things up on subjects that have nothing to do with football. … Who cares what he believes? … Plenty of players take stances on all types of stuff, and they never get posted here in a negative light. Shame on you mods.”

An auction for the cleats was held the weekend of December 11.