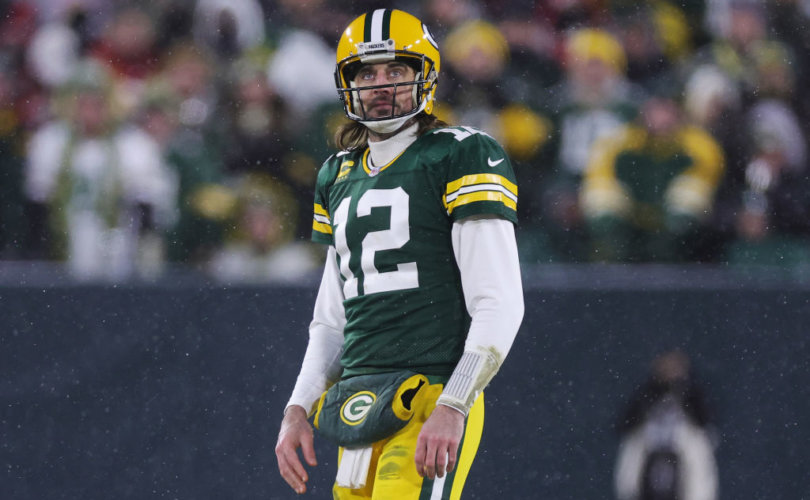 (LifeSiteNews) — Aaron Rodgers, the famously unvaccinated and outspoken star quarterback for the Green Bay Packers, once again waded into controversial territory as he discussed social media censorship, experimental COVID-19 jabs, and the legitimacy of Joe Biden’s presidency in a fearless interview with ESPN last week.

In a piece highlighting both Rodgers’ prowess on the football field and his gutsy participation in social and political “culture wars,” ESPN senior staff writer Kevin Van Valkenburg allowed the 38-year-old football player to expound upon some of his most controversial and headline-grabbing statements and perspectives.

This is a very interesting article about Aaron, his views on censorship, vaccines, Joe Biden and how he is a fake president. He talks about Dr Malone and others. https://t.co/6AkP2c7vge

“On the football field, Rodgers has flexed his gifts so frequently and with such brilliance, it is the rare season of quarterback play that feels like he has left behind mechanics of the position and transformed them into something closer to art,” said Valkenburg of Rodgers, who has won the ESPY award for best NFL player four times.

“Off the field, he has been equally brazen, leaning into culture wars, showing the world he is unafraid to fight back or denounce anyone he believes has lied about him or wronged him,” Valkenburg continued. “Just as there appears to be no single throw he won’t attempt, there is also no opinion he will back down from if he feels he is right.”

‘Freedom of speech is dangerous now if it doesn’t align with the mainstream narrative?’

Among the hot-button topics Rodgers tackled during the interview was media censorship, which he discussed in relation to virologist and mRNA pioneer Dr. Robert Malone’s abrupt erasure from Twitter days ahead of his New Year’s Eve interview with megastar podcaster Joe Rogan.

“When you censor and make pariahs out of anybody who questions what you believe in or what the mainstream narrative is, that doesn’t make any sense,” said the three-time MVP, who led the Packers to victory in the 2011 Super Bowl.

“When in the course of human history has the side that’s doing the censoring and trying to shut people up and make them show papers and marginalize a part of the community ever been [the correct side]?” Rodgers asked. “We’re censoring dissenting opinions? What are we trying to do? Save people from being able to determine the validity on their own or to listen and to think about things and come to their own conclusion? Freedom of speech is dangerous now if it doesn’t align with the mainstream narrative?”

Rodgers had shared a link to Rogan’s interview with Malone on Instagram on New Year’s Day, urging his 1.9 million followers to spend a worthwhile three hours listening to the conversation which hit on both the minutiae of virology and the cultural phenomenon of “mass formation” which Malone argued has emerged from the pandemic response.

“Are they censoring terrorists or pedophiles? Criminals who have Twitter profiles? No, they’re censoring people, and they’re shadow-banning people who have dissenting opinions about vaccines,” said Rodgers, who has famously bucked NFL rules regarding mask-wearing and vaccination, racking up a more than $14,000 in penalties from the league.

“Why is that?” he continued, hinting at big-dollar corruption by noting that “Pfizer cleared $33 billion last year and Big Pharma has more lobbyists in Washington than senators and representatives combined.”

Rodgers had made headlines during the preseason when he responded to questions about his personal COVID-19 vaccination status by stating with cheeky equivocation, “Yeah, I’ve been immunized.”

“The phrasing, he said on Thursday, was not misleading,” wrote Valkenburg, noting that Rodger’s response “was in fact purposeful and specific.”

“I had a plan going in for that question to be asked,” he told ESPN. “It was a pseudo witch hunt going on — who was vaccinated, who wasn’t vaccinated. I was in a multimonth conversation that turned into an appeal process with the NFL at that time, and my appeal hinged on that exact statement [immunized]. So what I said was, No. 1, factually true. I went through a multi-immunization process. And at the end of that, I don’t know what you would call it, I would call it immunized.”

The quarterback drew a firestorm of criticism for the statement, with COVID jab proponents arguing that his choice of words was misleading. After Rodgers tested positive for the coronavirus in November, many took the opportunity to attack his decision not to take the experimental shot, even though Rodgers was certainly not alone in contracting the virus for which many “fully vaccinated” athletes and others have also tested positive.

‘Not a pandemic of the unvaccinated’

In the ESPN interview Rodgers also took issue with the notion that people who haven’t gotten jabbed with the COVID-19 shots are fueling the pandemic, a narrative which has rapidly crumbled as “breakthough infections” have skyrocketed.

“What I don’t understand, it makes no sense to me to continue to spread this narrative that nonvaccinated players are more dangerous or these superspreaders,” Rodgers had said during an interview with Pat McAffee in December, criticizing the “two-class system that exists in our league.”

“There’s not many unvaccinated guys left in the league, but it’s obviously not a pandemic of the unvaccinated,” he said.

“Vaccinated people & unvaccinated people are testing positive for Covid.. the facts of whatever science we’re using here & it’s changing all the time doesn’t really back up having a 2 class system” ~@AaronRodgers12#PatMcAfeeShowLIVE pic.twitter.com/BOHo6zzt07

The quarterback got even deeper into controversial territory by joking that he’s unsure how President Joe Biden has any supporters “if you watch any of his attempts at public speaking,” adding, “but I guess he got 81 million votes.”

Rodgers also slammed the CDC, asking “how do you even trust them,” and took a swipe at the Biden administration for filming announcements and press conferences on a “fake White House set” which he suggested isn’t “helping the conversation.”

Why did the White House build a literal game show set complete with fake windows for Joe Biden??? So weird. pic.twitter.com/9Ud42AbEqQ

‘I don’t want to apologize for being myself’

While Rodgers has taken his fair share of criticism for his stance on COVID-19 shots and political matters, he has no plans of backing down.

“He doesn’t think he’s a jerk, as some people have implied,” wrote Valkenburg, adding that, “All he’s doing, in his mind, is being true to his beliefs.”

“I don’t want to apologize for being myself,” Rodgers said, bucking the trend of apologizing after receiving public blowback. “I just want to be myself.”