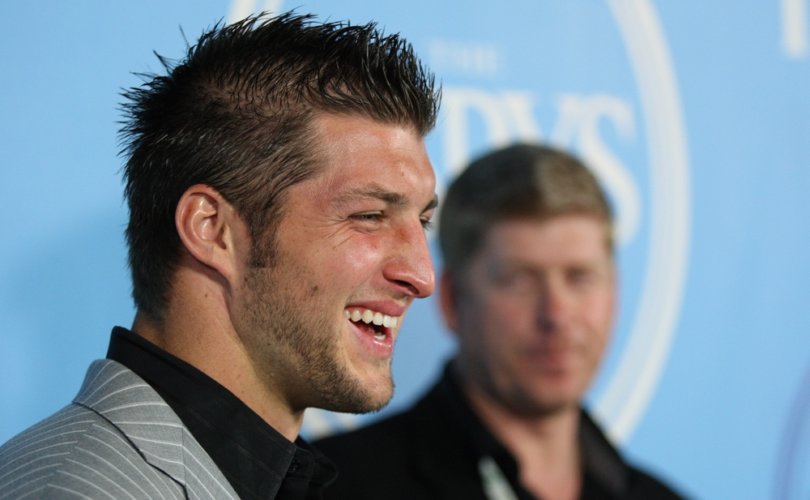 WASHINGTON, D.C., January 22, 2018 (LifeSiteNews) – Former NFL star quarterback Tim Tebow was almost aborted, and would have been had his mom followed the doctor’s advice.

Tim’s mom Pam Tebow related during a speech at the March for Life in Washington, D.C. on Friday how 31 years ago her doctor told her that if she did not abort her baby, she would likely die.

“From the beginning, it was a difficult pregnancy, profuse bleeding and cramping,” Pam told hundreds of thousands of pro-life advocates at the January 19 rally that filled Washington Mall.

“We kept thinking we lost Timmy so many times.”

“The best doctor in town did some tests. She determined that Timmy was a ‘mass of fetal tissue – a tumor,’ and I needed to abort immediately or I would die,” she related.

Pam said she and her husband rejected that option.

“Because of our love for the life in the womb, we chose to trust God and refused to have an abortion,” she said, to sustained applause and cheering.

Pam Tebow was one of several speakers at the 45th annual March for Life, which had the theme “Love Saves Lives.”

The March marked the Supreme Court Roe v Wade ruling that legalized abortion in the United States on January 22, 1973. The ruling has resulted in an estimated 60 million children killed in the womb.

The event was notable for President Donald Trump addressing the crowd via livestream video from the White House Rose Garden, the first time a sitting president has done so.

Pam Tebow related how her son’s conception was an answer to prayer. The Tebows were on missionary work in the Philippines when Pam’s husband Bob became so overcome with grief over the number of children aborted in the United States. She related how he “got on his knees” and prayed to the Lord, saying “‘if you give us a son, we’ll name him Timothy,’ which means honoring God,” she said.

“During this tough, difficult pregnancy I had no medical care, but I clung to our loving God,” Tebow said. “And suddenly the bleeding stopped. My husband flew me to Manila and a wonderful, American-trained pro-life doctor save my life and the life of our son.”

The doctor viewed Tim Tebow’s birth as a “miracle” because “only a tiny piece of the placenta was intact.”

“When Timmy entered the world, [the doctor] said, ‘this is a miracle baby. I’ve never witnessed such a miracle,’ Pam related.

The baby “was somewhat malnourished, though,” Tebow said. “So we asked all of our family and friends in the States to pray that he would grow big and strong, and if you’ve seen him lately, you’ll know God answered those prayers.”

Tebow, a Heisman Trophy winner, stands 6’3” and weighs around 235 pounds. He is currently in spring training with the New York Mets with an eye to a post-NFL major league baseball career.

So strong are the Tebows’ pro-life convictions they produced a 30-second commercial with Focus on the Family that, despite controversy, CBS aired during the 2010 Super Bowl.

“Timmy and I both have held babies that have been saved because of that commercial,” Tebow told the crowd.

In one case, a teacher “watched that commercial for 25 times. On the 25th time, she chose life. She had a little girl and she named her Evita, which means life,” she said.

Barna did a telephone survey across the country on viewers' response to the advertisement “and they found that over 5.5 million people said they had cause to rethink their stand on abortion, because of that simple commercial,” Tebow said.

Tebow concluded with a paraphrase of John 13: 34: “Because God loves us, we ought to love one another just like He loves us,” she said.

“So today, because ‘Love Saves Lives,’ we are going to stand together and march together in love to save lives,” she added.

Tebow was also keynote speaker at the March for Life's Rose Dinner Friday night, where she exhorted pro-life advocates to keep fighting that unborn children will be protected.

“You need to have a mission – you need to be part of what God’s doing. We wanted all our five kids to be part of a mission,” she said, pointing out that at “the very first event I spoke at, a woman told me I didn’t abort because you didn’t.”

“You may not get a reward for the things you do for the cause of Christ in this world but you will in the next – that’s a reward that will last for all eternity,” Tebow said.