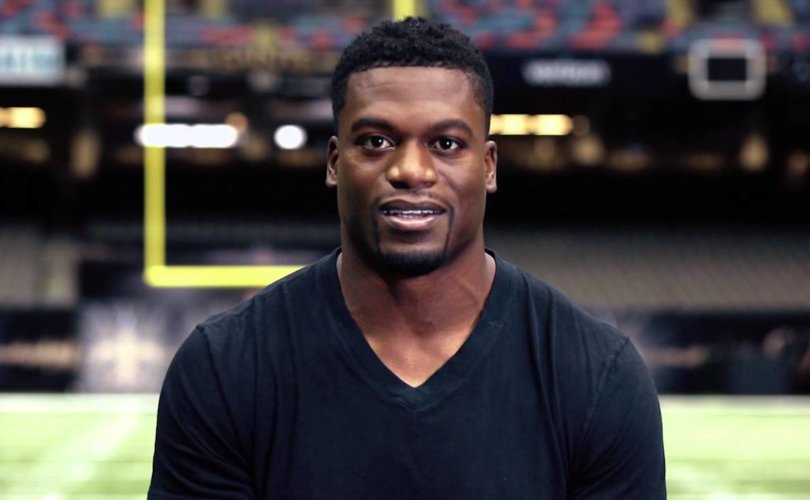 WASHINGTON, DC, January 27, 2017 (LifeSiteNews) — Men have to “rise up and lead the charge” in defence of life, NFL player Benjamin Watson told the March for Life today in Washington.

“We as men must stand up for the lives of the innocent and their mothers in crisis,” Watson exhorted a cheering crowd in the hundreds of thousands gathered at the Washington Mall. “It is past time that we be the leaders, caretakers and providers that we were meant to be.”

The Baltimore Ravens tight end is a born-again Christian and father of five.

“As important as women have been in championing this cause, you men, us men, must rise up and lead the charge,” the 36-year-old told the crowd.

“Even if it wasn’t demonstrated for you by a father, you can be different, you can change the course of generation,” he added. “Men, we can be silent no more.”

Watson, who runs a Christian ministry called One More with his wife of ten years, referred to the “power of one,” in his address.

“Looking out, I see a sea of collective humanity, but looking closer I see individuals who have their own spheres of influence,” he said.

“It is also the power to unite as we have today as one, for a common cause to end the unthinkable practise of abortion in America.”

The March for Life is the largest annual civil rights event in America. Hundreds of thousands of men, women, and children peacefully demonstrate in Washington against the 1973 Roe v. Wade Supreme Court decision that legalized abortion in the US.

When Watson proclaimed that “pro-life will not only be a political stance or argument but a way of life for all of us,” the crowd broke into loud cheers.

“To be pro-life should be all encompassing, from conception to the grave,” he said. And “standing for life” also means caring for “victims of sex trafficking and abuse, the hungry the poor, the disadvantaged as well as the elite.”

He urged pro-life advocates to “remember the power of loving kindness, that we may comfort the men and women who have made these decision willingly or under duress.”

“Let us remember the call to righteousness, knowing that we ultimately answer to a higher calling and that no matter what we have done in the past, grace — which is my daughter’s name — grace is sufficient to cover our many faults.”

Watson also urged the marchers not to give up, but to “stay the course on days when the fire inside us burns as well as days when the ember flickers.”

“In many respects this battle may seem never ending but never forget that the goal is worth the effort,” he said.

“In a time of relativism, we must remain convinced that truth is greater than any trend, and because of this we are compelled passionately to engage our culture without compromise.”

Watson himself does exactly that, notably stirring controversy by denouncing Planned Parenthood, and its racist agenda last August.

“I do know that blacks kind of represent a large portion of the abortions, and I do know that honestly the whole idea with Planned Parenthood and Sanger in the past was to exterminate blacks,” he said in an August interview with Turning Point Pregnant Resource Center in San Diego. “And it’s kind of ironic that it’s working.”

Watson, in his 13th season with the NFL, said then that some of his teammates share his views, but don’t want to go public. “One-on-one they’ll talk about it, but Twitter, Facebook, or authoring a book about a polarizing topic? They don’t want to touch it.”