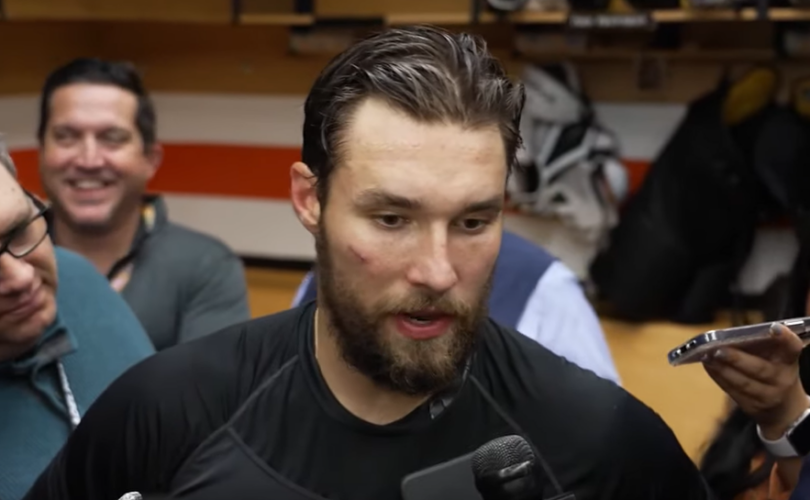 (LifeSiteNews) — Sports fans have come to the aid of Russian Orthodox hockey player Ivan Provorov, who has been under siege from liberal commentators for refusing to wear rainbow-colored warmup gear before a “Pride Night” game this week.

According to The Daily Wire, Provorov’s No. 9 jersey for the Philadelphia Flyers has nearly sold out at several different online stores.

Ivan Provorov’s jersey is now completely sold out on NHL Shop and Fanatics with the exception of extra smalls. pic.twitter.com/qEb3qF0IIN

On Tuesday, Provorov told reporters that he just wanted to “stay true to myself and my religion” when asked about why he didn’t participate in the pro-LGBT pre-game exercises.

Provorov’s decision to live out his faith set off a firestorm of commentary in the sports world. Reporters from ESPN, Sports Illustrated, and elsewhere immediately condemned him for not bowing to the woke agenda. EJ Hradek from the NHL Network disgustingly urged him to “go back to Russia” where he could “maybe” fight in the war with Ukraine.

Flyer’s head coach John Tortorella defended his star player’s decision, however, saying on Thursday that he “did nothing wrong.”

“Provy’s not out there banging a drum against Pride Night,” he said. “He quietly went about his business.”

“Provy didn’t actively seek out and try to make a stand against it,” he continued. “He just felt he didn’t want to take warmup. I respect him for his decision. I thought the team handled themselves well. I thought our whole organization handled itself well to make sure we didn’t lose sight of that night.”

Tortorella further explained that he held a team meeting to discuss the matter and that he doesn’t believe it will negatively affect them going forward.

Although the Flyers franchise said it will continue to be “strong advocates” for the “LGBTQ+ community,” the NHL struck a more diplomatic tone that has not been well received by the “social justice” left.

“Clubs decide whom to celebrate, when and how — with League counsel and support. Players are free to decide which initiatives to support, and we continue to encourage their voices and perspectives on social and cultural issues,” their official statement read.

Provorov’s decision came just days after minor league hockey player Louie Rowe was dismissed from the Illinois-based Peoria Rivermen for calling out another team’s embrace of the LGBT agenda on Twitter. “It’s a full-on mafia,” Rowe told LifeSiteNews this week. “They have organizations under their grasp.”